5 Superpowers In Young Adult Fiction You Wish You Had

In young adult fiction, if you don’t have a superpower, you’re kind of out of the loop. Sure, there are lots of great books and stories in young adult novels nowadays that feature down-to-earth people in drastic, otherworldly situations. Not knocking those stories at all. But isn’t it cool when the protagonist in the young adult book you’re reading has a power that makes you stop and think: boy, it would be so great to be able to do that too? it just makes you think of what good you could do in the world.

Here are five supernatural abilities found in young adult fiction that would make your life so much easier.

Have you ever wondered what people say about you when you’re not there? You could eavesdrop on everyone! In young adult fiction, having a character who can become invisible is useful for developing a plotline that doesn’t involve one of your POV characters.

Potential downsides: Your clothes do not become invisible. Either you leave them on and risk bystanders thinking that your clothes have become sentient, or you take them off, and when you become visible again, you’re naked!

Faery Ink Press tie-in: Jia Fields, one of the heroes of the Stars In Her Eyes young adult science fiction novella, can become invisible almost at will.

This superpower is probably one of the most freeing power of all five discussed here today. To just allow your body become weightless, and float up into the sky? Think about it: no more getting stuck in traffic. If you wanted to go somewhere, you wouldn’t have to worry about travel expenses. Bam! You’re there. The real question would be: for flight, would you want to have wings, or not? Being a faery fan, the wings would be a nice touch, but they might get in the way of wearing regular clothes.

Potential downsides: If you’re branded a UFO, flying in unauthorized space, you could get arrested. Or worse: what if you got gunned down? Probably wouldn’t happen–that would be extreme, but still, worth worrying about. For teleportation…what if you materialized into a solid object? Good luck explaining that to your doctor.

3. Ability to see the future

Predicting the future–it’s everyone’s dream! Knowing how much or how little to prepare for that exam or that business meeting. Avoiding that morning bus in favour for taking the train–where you might meet your perfect guy! You could do a lot of good for yourself, your friends, and your family with this superpower. Providing you wanted to do good…

Potential downsides: Predicting your own death, and the death of your friends, would be extremely disturbing. You’d be no fun to throw a surprise party for! If you were able to make real change because of your foreknowledge, that would be beneficial. Otherwise, if everything is stuck in fate, sealed in stone, then this would be a truly depressing power.

Faery Ink Press tie-in: Sunni Harris in the Sparkstone series has the ability to see the future…but only in her dreams.

Sort of like being able to tell the future, but much, much more immediate. Extremely useful in day-to-day situations–you could probably go for most of your life not telling people that you have this power, and use it to get ahead of the game.

Potential downsides: Accidently hearing something you did NOT want to know! Similar to the above superpower, all surprises would be ruined forever. You might have trouble making friends.

Faery Ink Press tie-in: Wil McBride, our intelligent, tech-savvy man in Stars In Her Eyes, can sort-of read thoughts: he can sense people’s energies and general feelings in response to various stimuli. He can also interface with and command technology.

I guess this one is kind of cheating. It’s not really an active superpower. It’s something in you. I admit, this is the superpower I’d want most. Unlimited time–barring disease, and being murdered–you could do whatever you wanted.

It’s always difficult to write immortal characters because they have vast amounts of experience. You don’t want to make them sound too young. If they’re romancing a teenage character, the age difference is probably phenomenal. The experience level would be so different–not to mention, one probably grew up in a different time than the other–that it would be hard to find common ground between the two characters.

Potential downsides: Outliving family and friends. Going mad with boredom after doing all that you want to do. Being discovered by a mob, misunderstood, hunted, and then killed.

Faery Ink Press tie-in: J.G.C., the mysterious alien who Ingrid and her friends encounter in Stars In Her Eyes, seems to be very long-lived…

Tons of Superpowers, Plus Aliens 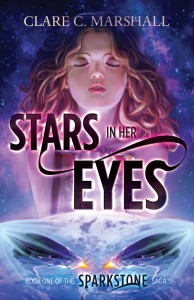 Stars In Her Eyes is a young adult science fiction novel that has all of the above. Read some sample chapters here, or find out more about it on the book page.