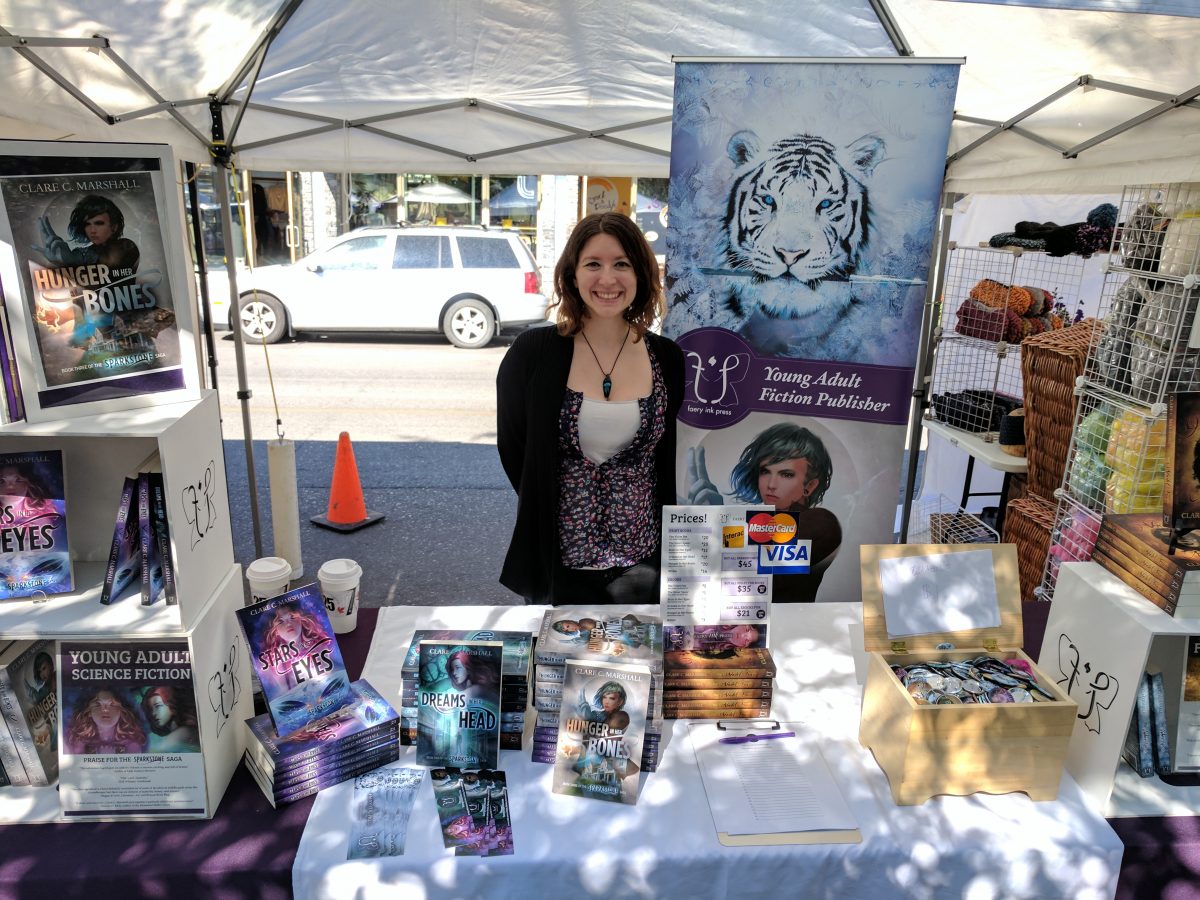 If you would have asked me a few years ago if I’d try outdoor farmers markets to sell my books, I would have said no way. Other than fear, I had some legit reasons: it’s not easy to predict which way the weather will turn, there are costs involved with setting up a tent, not all farmers markets accept books/non-handmade stuff (or their acceptance is limited).

And the biggest reason for not trying, of course, is fear of failure.

But I don’t like to let fear win. And with the success of my multiple shows last year, I researched the hell out of nearby farmers and craft markets. A market is a market as far as I’m concerned. I selected Banff Farmers Market as a test, and I’ll be exhibiting there from 10am-6pm every Wednesday in August.

This is the post-mortem for my first day, August 2. I’ve decided to write one for each day (there will be 5 in total) as markets are different from week to week and no doubt I will be learning a ton about this new way of selling!

I met so many friendly people! Special thank you to Jim, the t-shirt vendor who helped me sort out my tent problem, and Raffi, the marketing coordinator and temporary guy in charge who got me everything I needed, and Cheyenne, my neighbour, for fun talks, snacks, and company! And of course Dave, for driving me.

I chose the Banff Farmers Market for several reasons.

Second – it’s a popular tourist destination anyway, so I’m likely to reach not only the locals but lots of from-away people who have never heard of my work. Meaning, less chance of saturating the market.

Third – Banff is pretty and any excuse to go there sounds good to me. It’s easy to get around the town and isn’t a far car or bus from Calgary.

Fourth – July/August are busy tourist months for Banff, and I had confidence that I could make back my entire investment – and then some.

I was nervous the week leading up to the market because I had no idea what to expect. Unlike with the large cons I do, where there are multiple emails sent to vendors weeks and days before explaining move-in procedures, parking, and set-up, I got nothing from the organizers. I wasn’t even sure if I’d have a tent and a table when I showed up – or when I *should* show up. 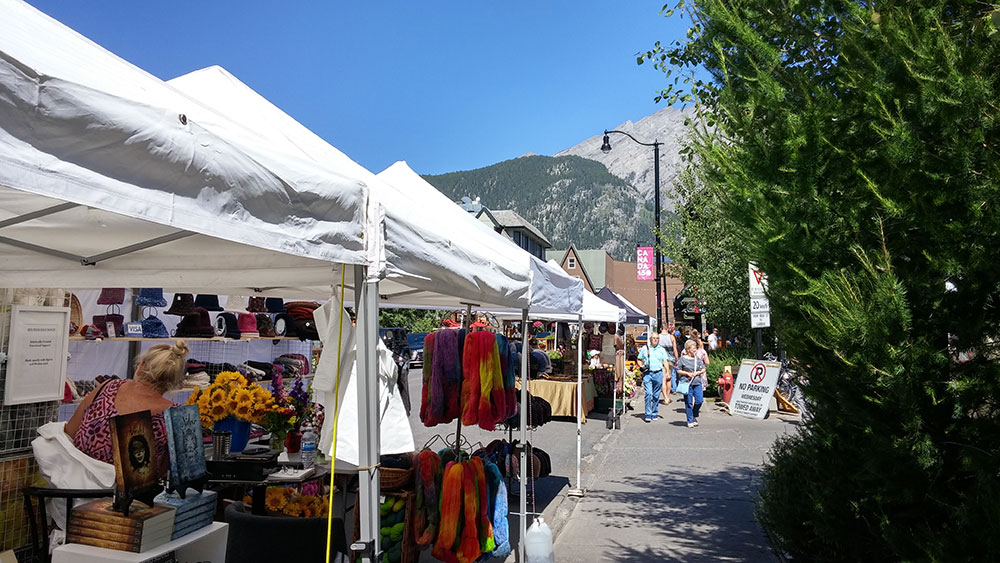 When we arrived there at quarter after nine, almost everyone had set up already. The market runs in one of Bear Street’s parking lots, but also spills out onto Bear Street. It didn’t seem that busy. My spot was the only one not set up. It was on the street–not in the market proper. To be honest, I wasn’t that perturbed about that. I was getting a lot of street traffic. But I can see how being in the parking lot/market-proper area would be advantageous. It’s across from the mini mall: I can see people wandering outside into the market, walking the circuit, and then not going onto the street–exiting down the alley instead.

The other thing about my spot is because the road slopes sharply towards the sidewalk, I had to be on the lookout for spontaneous books falling over. Which happened twice! 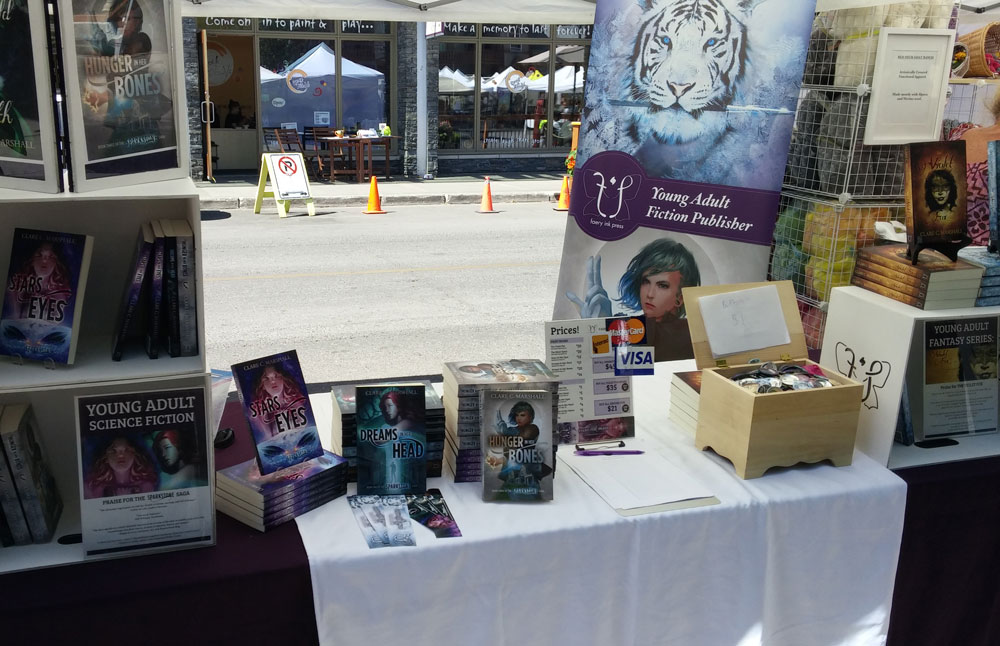 My space was 10×10, covered by a tent. The nice thing about displaying for one day is I only brought what I thought would sell, plus a little extra to fill out the table. AKA, no lugging a TON of boxes and items around! The box displays worked well, but I need to paint over some scuffs – the wood is just not that durable for all the travelling I do! 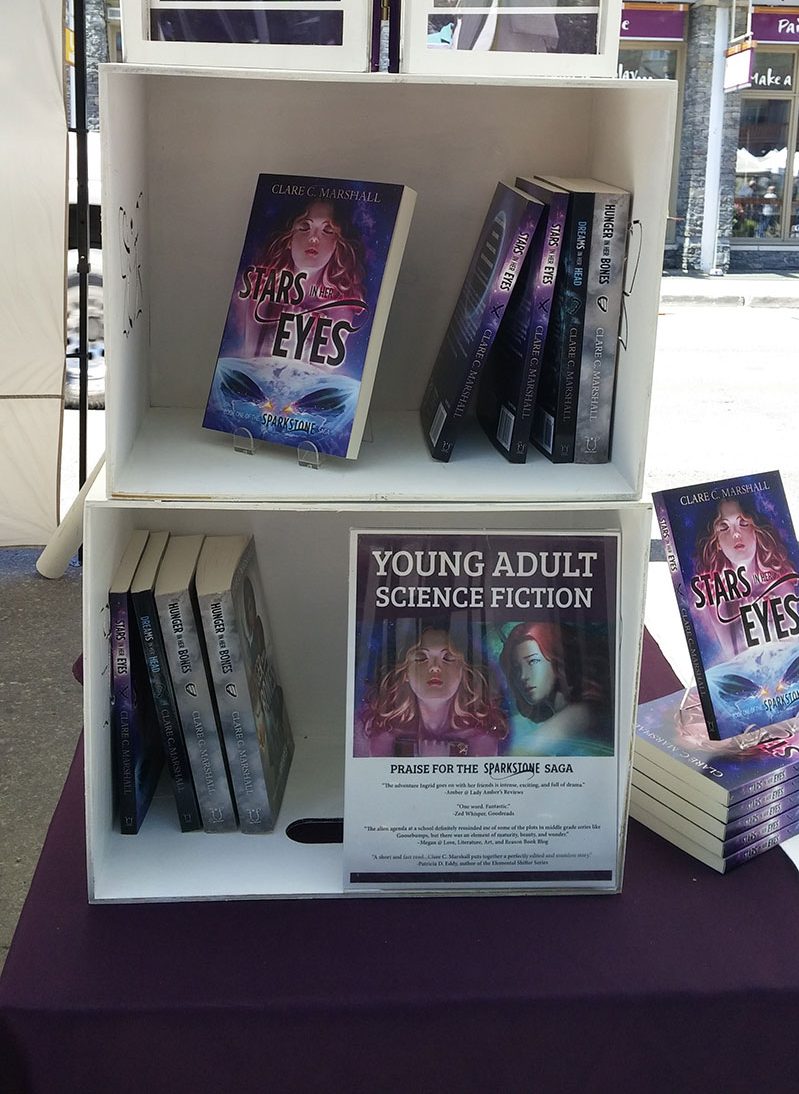 Also, no matter what you do, the wind WILL try to knock everything down! I had a terrible time with my reliable banner. No matter which way I positioned it, it fell. Between the wind whipping around and the cars whizzing by behind me, it created enough force to push the banner over–sometimes onto the table itself!

Fortunately, my experienced market neighbours came to my rescue. They lent me some bungee cords to attach the banner to the tent. Fixed the issue! I’ll have to get some of my own for the future.

The sales experience at the farmers market was pretty much the same as selling at a convention, with less cosplay and more relaxed, happy locals and tourists.

The morning was so, so slow. At 1pm, I was starting to resign myself to only making back my table space. But by 2pm, more people were venturing out, it was getting warmer, and sales picked up. I surpassed my minimum sales target and nearly doubled it! Essentially: I made back the entirety of my investment so far for the five days plus some.

My neighbours on both sides commented on the slowness of the day. The BC wildfires are still raging, meaning smoke is drifting over to Alberta–sort of. We passed through a Stephen King’s The Mist-style haze when we were approaching Canmore, but came out the other side to an otherwise sunny mountain view. We speculated that potential visitors may believe that Banff is covered in smoke and not be venturing out, as the past couple weeks since the fires had been slow days as well.

Now that I know what I can make on a slow day, I can better predict what I’ll make when it’s busier.

This is my first event without Within on the table. I only had one person ask about it (it was still on my pricing sign). When people asked, “What’s the first book you ever wrote?” (Why was this a common question…?) my response, “I don’t have it on the table” was more than adequate. While I lament it brings my earning potential down slightly, I’m happy not to have to explain “This is just a stand-alone, it’s a little more mature than my other books.” It also solves my awkward display problem and makes the selling process smoother.

Stars In Her Eyes won for bestselling individual title – but The Violet Fox Series continues to win bestselling bundle. I’m curious to see how many people will return within the next month to buy the next Sparkstone Saga book. I had one (local) mother tell me she would. This is an advantage of the market: if the customer consumes my content quickly, they can come back the next week for the next installment. Of course, there’s the potential for saturation fairly quickly, but I think about half my customers were tourists, so that should stave off the saturation point. I’d be more concerned about that if I was exhibiting for the entire May-October season!

For those keeping track of my payment methods: It was about an even split between cards and cash, and a quarter of the card payers paid with debit. So, again, very on trend with what I’ve experienced so far.

Yes, Everything Is Difficult and I Should Relax?

This event saw the return of some general questions I’ve mostly gotten past at comic cons, such as: “Where do you get your inspiration?” and “Is it hard to publish a book?” I got the “is it hard?” question two or three times. This one always baffles me. Writing is hard, but it’s not as hard as production (or having the means to produce), and that in turn is not as hard as marketing and selling. This is difficult to convey in a short conversation!

In the afternoon, I began to relax. It’s hard not to appreciate the chill attitude of the locals and my fellow vendors. I even left my table to go to the bathroom–on my way back, I was running so as not to miss a potential customer, and my neighbour saw me whiz by and said, “Whoa, it’s okay, slow down!” RELAX CLARE EVERYTHING IS FINE.

People look out for each other at this market–everyone was quick to lend a hand.

While it was easy to fall into my selling routine, I had to remember that not everyone was into science fiction and fantasy–unlike selling at conventions where that is pretty much assumed! This means a softer approach: engaging only those who want to be engaged and treating my booth as a pop-up shop rather than a destination for con attendees. In general, people seemed interested in my work and excited to meet a local author.

Next week I’ll bring my horizontal banner and a chair. Even though I stand all day, sitting during the slow periods will really save my feet!

I leave you with a new friend I made – a magpie that hung out across from me pretty much the entire day. He was very determined to eat an abandoned cherry but he kept dropping it. He was also interested in the wood chips but again could not fathom why his beak couldn’t hold onto them for more than a few seconds. 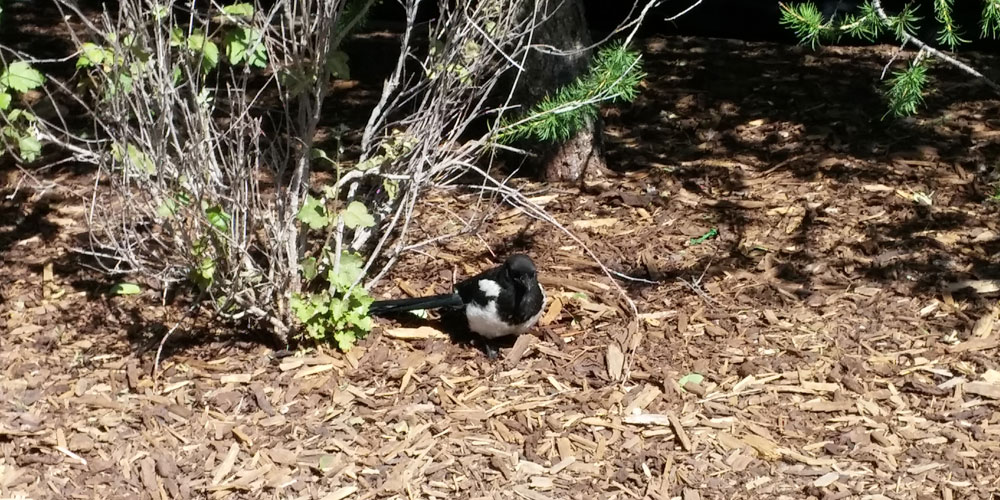