These past few weeks have been extremely busy! My time in Winnipeg is never long enough. Any excuse to go to Winnipeg–so I decided to give C4 Comic Con another try after three years of avoiding it–read my first experience at C4 here.

Oh, but before I get into the post-mortem: while I was in Winnipeg, I DYED MY HAIR! Yep, in all the pictures here, it’s purple and blue. I got it done at the Sapphire Hair Lounge on Academy Road. So exciting. I’ve never done anything with my hair before, and I was so glad to have Kelly turn it into something amazing. YAY. 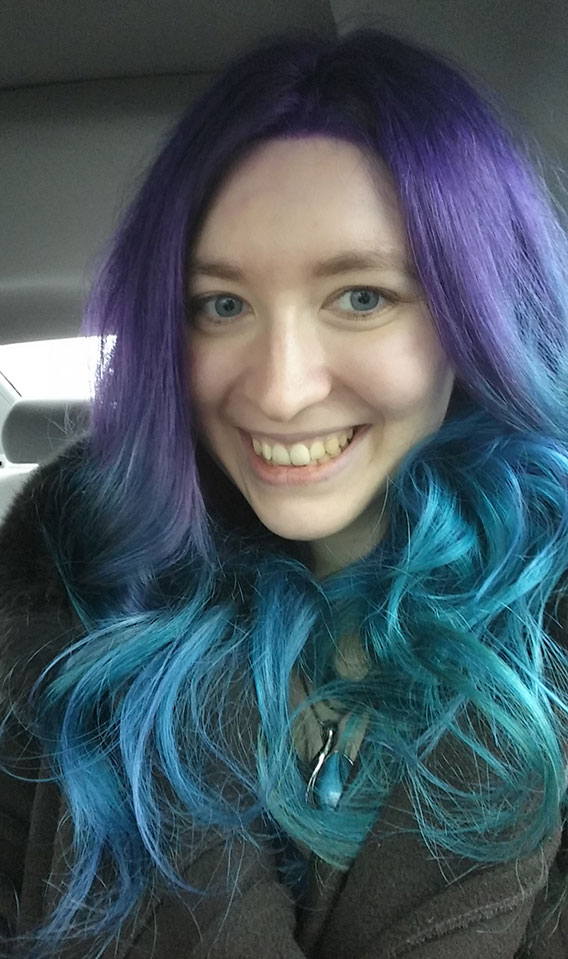 I was so excited to be back in Winnipeg! So many creative friends there, like best friend Samantha Beiko and great author pal Chadwick Ginther, both of whom I’ve written about many times in this post-mortem series.

I stayed a week in Winnipeg just to hang out and get extra things done before the con—including, of course, the all-important, very first hair dye job. Sam went out of her way to make me feel welcome, ferried me around, hung out while I went crazy with my hair, helped me with the table. I’m very lucky to have her as a friend. I wish I’d had more time to hang with Chadwick & Wendy this time around—Chad and I have at least one creative project planned for some time in the future!

I’m writing this at 6am in the airport as I journey home to Halifax, and while I’m excited to go home for the first time in about a year, I’m sad to leave this city with which I feel such kinship. I was just getting used to waking up in Sam’s spare bedroom, working with her, talking with her face-to-face instead of messaging her on Facebook about anything and everything. I was even getting used to the dog, Sophie.

Anyway. I haven’t been back to Winnipeg for C4 in about three years. I go at least once a year for other creative reasons, and I was looking forward to giving C4 another try after the last disastrous show previously. All in all, C4 still isn’t the best organized con, though it has grown considerably, and shouldn’t be ignored for the travelling creative entrepreneur.

Chadwick and I shared an artist alley booth. It was cheaper than buying separate artist alley tables—about $450 split two ways, compared to at least $250 each. This was a good financial decision as it impacted our location. All of the cheap artist alley tables were in the Butt of the Con, as I like to call it. I’m learning more about the way tables are arranged at events like these. The more you pay, the better location you receive–theoretically. Better as in: closer to the entrance, on a more trafficked lane. Not always, of course, but it was true at Edmonton Expo, so I’ll continue to test this theory at other cons.

At first, I didn’t think our location was that terrible. I think we had a better location than most artist alley vendors. We were on a main throughfare, an express lane of traffic that was close to multiple entry/exit points. Unfortunately, we had a similar problem to Saskatoon Expo where the aisle was too wide, and we didn’t have much across from us. That meant we had to work twice as hard to call attention to our booth.

By the end, our feet were sore. My feet were sore at Calgary Expo, and it was pretty excruciating at Saskatoon Expo, but I don’t remember them being THIS bad. Time for some new shoes, maybe. You just can’t sit down with the kind of display we were rocking. 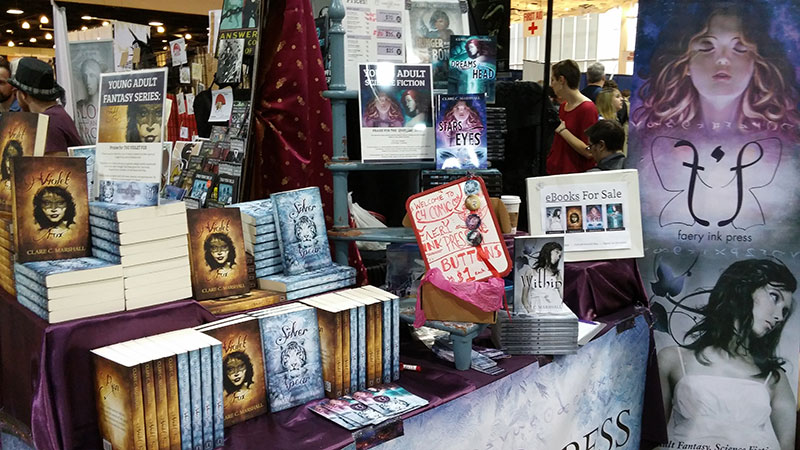 I really departed from the norm with this setup.

Because the two of us were sharing a 9 x 9 ft space, but only were provided with one table, Chad brought an extra table. The original plan was to form some kind of U or half-U. But…that didn’t really work out.

The arrangement took a lot of brain maneuvering to make work for the booth of us. The lazy way out would have been to just have one table, and try and fit everything on…except that wouldn’t really work, since Chadwick has a LOT of various projects he’s selling. So it made sense for us to have at least two tables. The trick was arranging them so neither one of us felt shafted in the space. I think it would have been worth it—maybe—to have sprung for end space (it costs extra) so we could have done a complete U-shape. As it was, we each got table ends that faced the public, and had to build deep & vertically to maximize space, and still have standing room.

I borrowed these cute stairs from Sam and made a spiral arrangement with some of the books. The stairs and the arrangement got lots of compliments. I think it’s difficult to make this work, and I rearranged things a few times to optimize what I wanted to promote.

The problem with our display was the two of us were standing in the middle of it–essentially human walls that blocked people from coming deeper inside. If we didn’t stand, we would have attracted fewer customers. So…it was a tricky balancing act not to block our product but also be inviting. 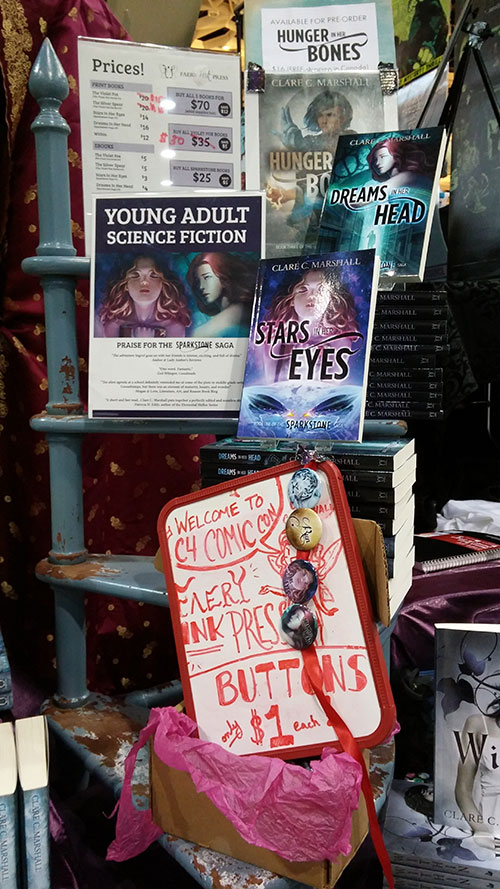 I had a pretty high sales goal based on what my friends had done in previous years since I’d been there. But because they arranged the floor differently this year, vendors across the board were reporting a decrease in sales. Usually the artist alley is in a separate room, right off the main entrance. Many people believed that was the entire con, and so my friend did very well for themselves. This year, artists and exhibitors are on one floor, which was difficult as it’s a HUGE space, crowded with people.

I didn’t do terribly. I just expected better. There were a lot of lookers, a lot of people asking me if they could get them at Chapters or McNally Robinson. Technically you can go into McNally and order them–but dude, that’s more expensive than just buying from me, right there and then!!

I benefited from Chadwick’s home-team advantage—he has an established base here in Winnipeg of friends and fans. Usually there was no crossover in terms of interest or demographic, but sometimes his friends would buy a book from me anyway, especially if they had a younger relative with them. I tried to upsell Chad’s stuff whenever possible, especially to the older crowd. He did especially well after the Canadian Writers Panel. YAY BUSINESS.

“Don’t go into this business expecting to make money.” 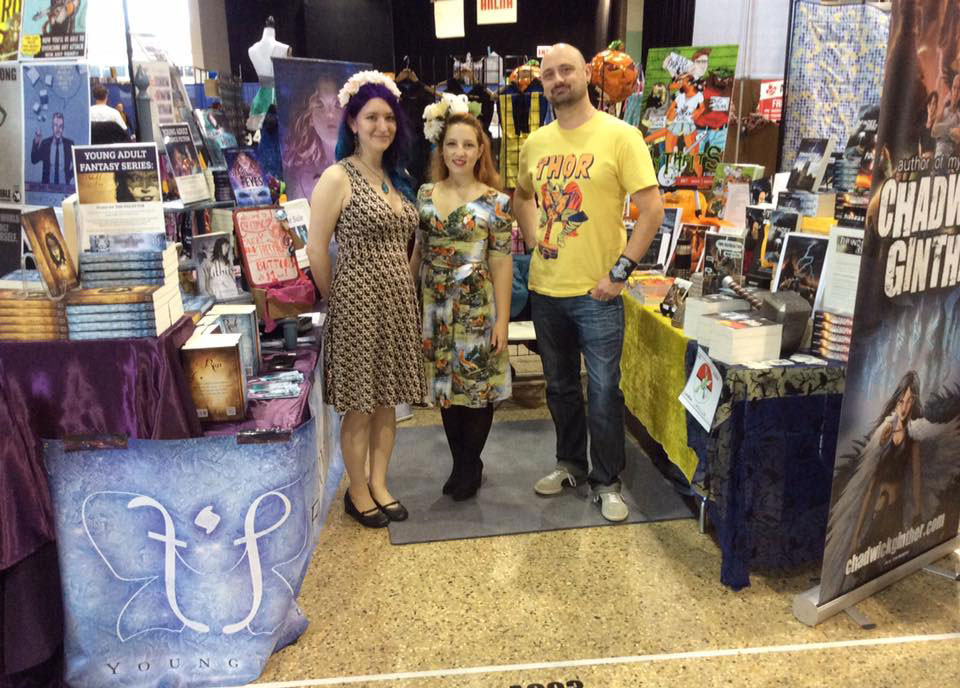 This came up a few times this weekend, not because of customers at the booth, but by virtue of discussion with my creative peers.

During my publishing course at Humber, we were told that we shouldn’t be in this business expecting to make piles of money. We should be in this business because we love books. This is a simplistic and well-meaning statement, but is the wrong way of approaching being a creative entrepreneur.

True, there are other businesses where the margins are higher and you could get “richer” “quicker.” Yet it’s completely untrue to believe that if you’re in publishing, you’re resigning yourself to a life of poverty. To be clear, I’m speaking to the smaller creative entrepreneurs, those with dreams of writing and publishing their own books, artists, etc.

You CAN make money in this business. Maybe not billions and billions. You just have to know how to run a business—you have to treat your art like a business. I’ve met several successful artists here in Winnipeg that know how to hustle, know how to market themselves, and live off their art. It is possible to do it. It takes time, it takes making a lot of mistakes, it takes discipline, but it is totally possible IF you’re willing to commit your life to it. There is no dreaming about doing around here: there’s only doing. And if you ARE doing, but you’re not making money, maybe you need to revisit the product, the brand–and figure out how to make it work for your audience.

On the Canadian Writers Panel, I made this point: you can’t promote and promote and then just coast. There is no coasting. If you coast, you lose traction. You’re constantly going uphill. I think that’s something that those on the outside don’t get about creative entrepreneurship. There is no “making it”—there’s only the next thing.

And to the random guy who asked Chadwick if publishing is easy or hard—it’s hard, dude. If it was easy, everyone would be making piles of money. And if it was easy, it wouldn’t be worth doing.

I was pleased to finally meet Hope Nicholson, who is friends with Sam, and is the publisher of Bedside Press, and editor of Margret Atwood’s Angel Catbird. Also was finally introduced to Nyco Rudoph, who publishes some seriously funny comics. Got acquainted with Jonathan Ball and James Gillepsie, writers who collaborated with Greg on their Shared World work. Shared World is a collection of stories that tell different stories in the same world. They printed a limited number of copies, and sold them at a premium. Another great idea. Greg is amazing at selling that stuff.

There seemed to be more booth barnacles than usual at this con. Was it my hair, or Greg’s display, or the fact that there are twice as many books to look at in our booth space? One particularly insistent man wanted to know if Chadwick and I were married…because we “looked” married…because we were standing next to each other? SIGH.

I’d like to—I need to figure out how to make this con work for me. In a lot of ways, it’s a working vacation. I get to hang out with all my creative friends, but I also do a lot of business by doing so, because we all support each other.

I’d likely try a similar booth space on my own or with Sam if she was willing. She’ll have the first book in her newest series out next year and she also writes YA so that would be a good cross-promoting opportunity. We’ll see!!!