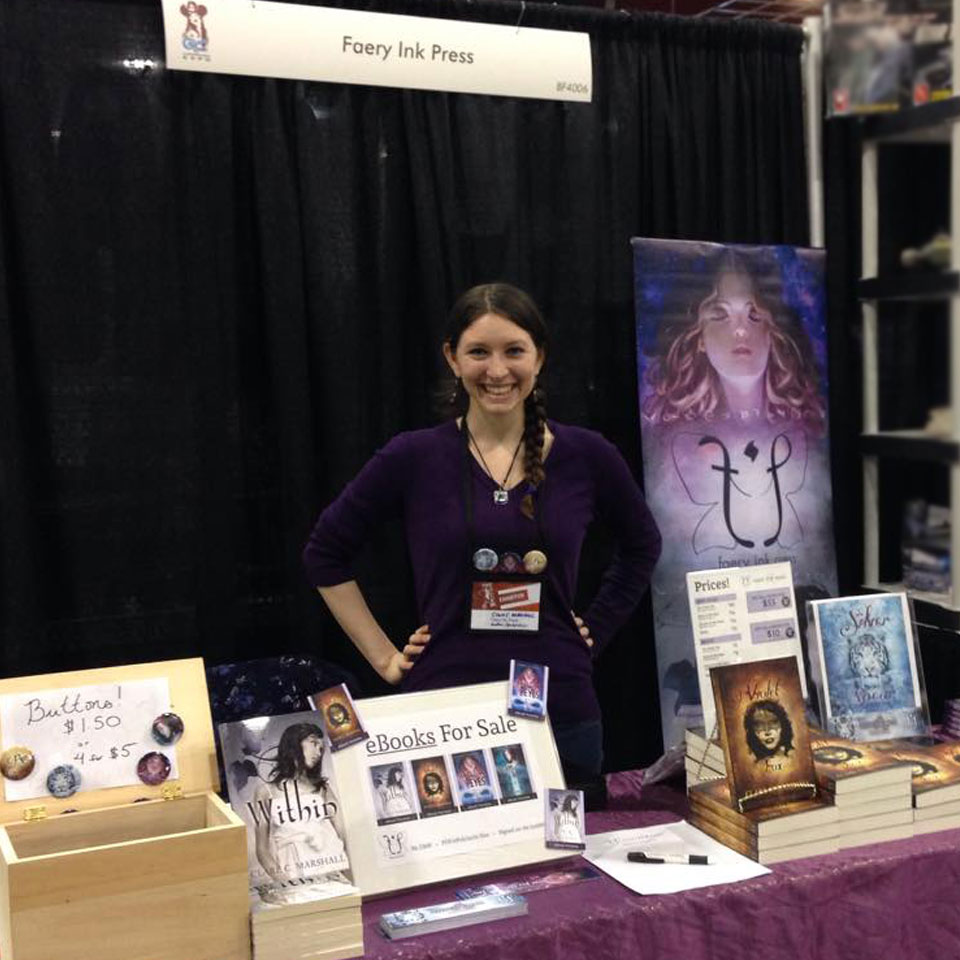 It’s over. My first Calgary Expo. I’m exhausted. Usually I come back from a convention rejuvenated or filled with creative energy, and although I have some of that, I’m mostly just filled with the overwhelming anxious sense of duty.

This is the most overstimulating con I’ve ever been to: Peter‘s words. It’s got this hectic energy. There is very little down time. Over 102,000 people attended. The Stampede grounds are big as is, and the BMO building was just jammed packed. I was in the Big Four Building, less trafficked but still buzzing. Friday was especially exhausting for me. Saturday when I ventured into the BMO to search for my friends’ booths it was just overwhelming. I was trying to find the EDGE booth and I had a general idea of where it was, as well as the booth number. But BAM colour there and OOH PRETTY DRESSES and OH ART and POSTERS and BOOKS? COMICS! and BAM MORE COLOUR. I had eye strain for two days.

This is the big leagues as far as cons go. Lots of sales. The Violet Fox sold lots, which is great, because the Silver Spear is coming out later this year!! I didn’t sell out of anything, though I got fairly low on Within copies, and I had to print more little eBooks mid-con. I brought more product than I thought I’d need, which is fine as I can use it for When Words Collide and the other conventions I’ll do this year. I think I’m coming to this con at a good point in Faery Ink Press’s life. I’ve got four books, with one more on the way, plus eBooks and buttons. This is a con where you put everything on the table. 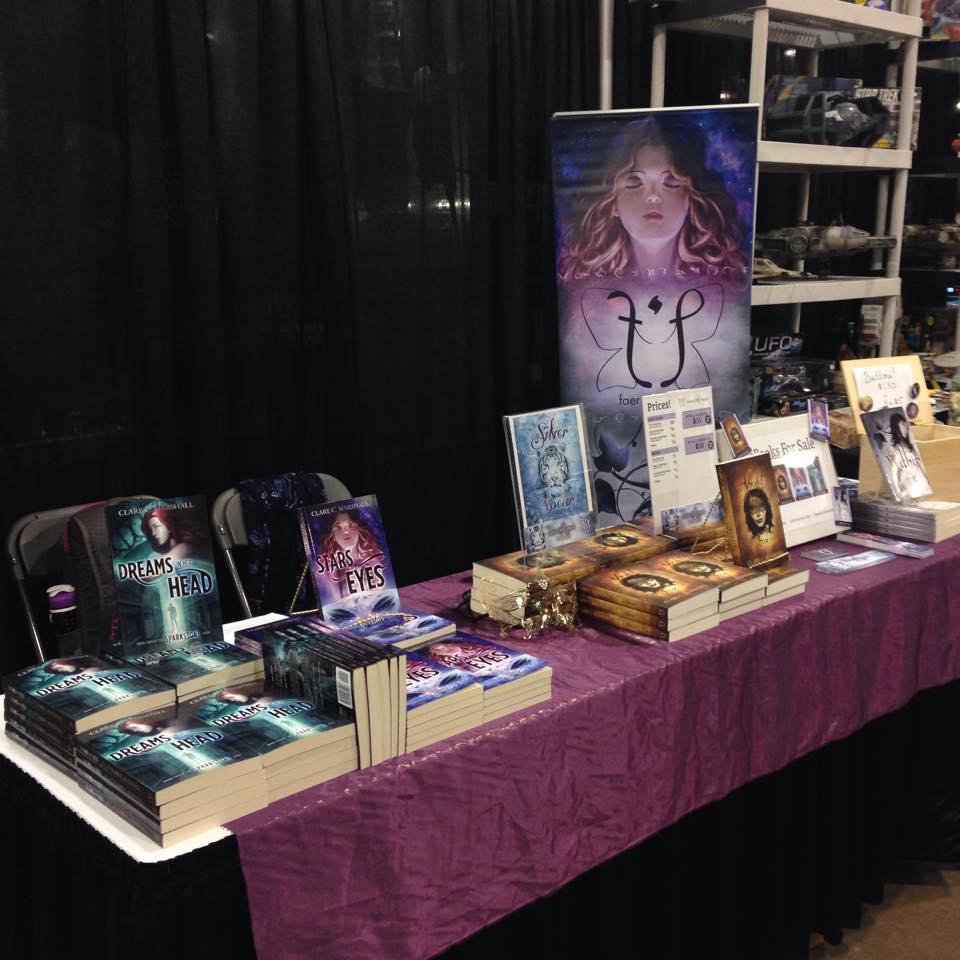 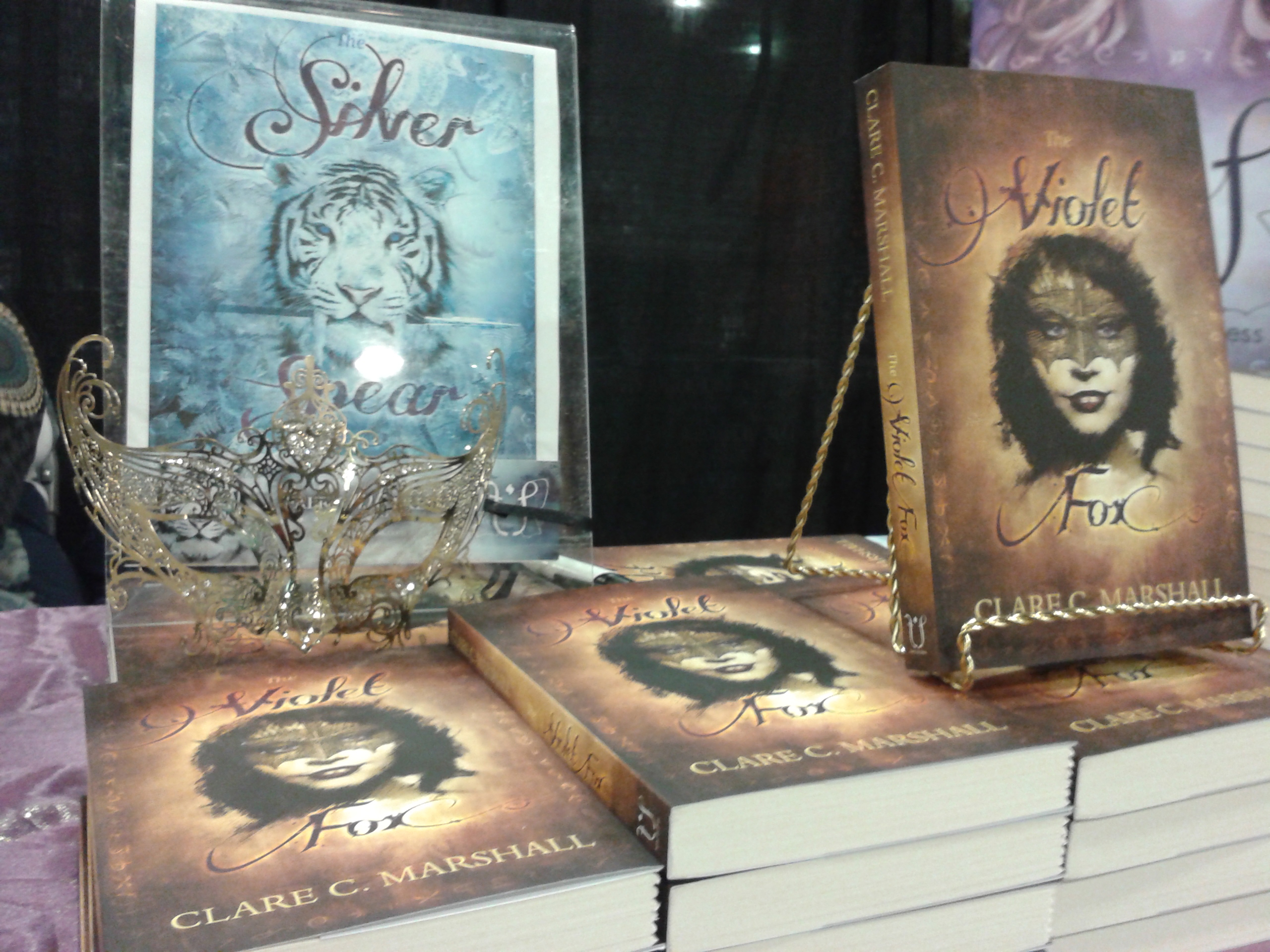 I think I’m starting to get the hang of attractively displaying my books, but for future large cons like this one, I’d like to take it to the next level. Especially for next year’s Calgary Expo. There are SO MANY vendors. In an artist alley setting like where I was, there’s not too much competition for attention. But in the bigger booth areas, there’s bigger displays and more visual noise all around. Future things to think about include: a second banner (free standing or hang-up), cardboard cutouts, table shelves (which Kel McDonald recommended, and are such a good idea!), and I’d like to have more “environmental” display items too. Kate brought a pretty mask to enhance the display. Lots of people complimented it! So props like that. I’ve even considered a vase of (fake) colourful flowers…but that could easily get cheesy. Anything to elevate my little booth space and transform it into a place of wonder. 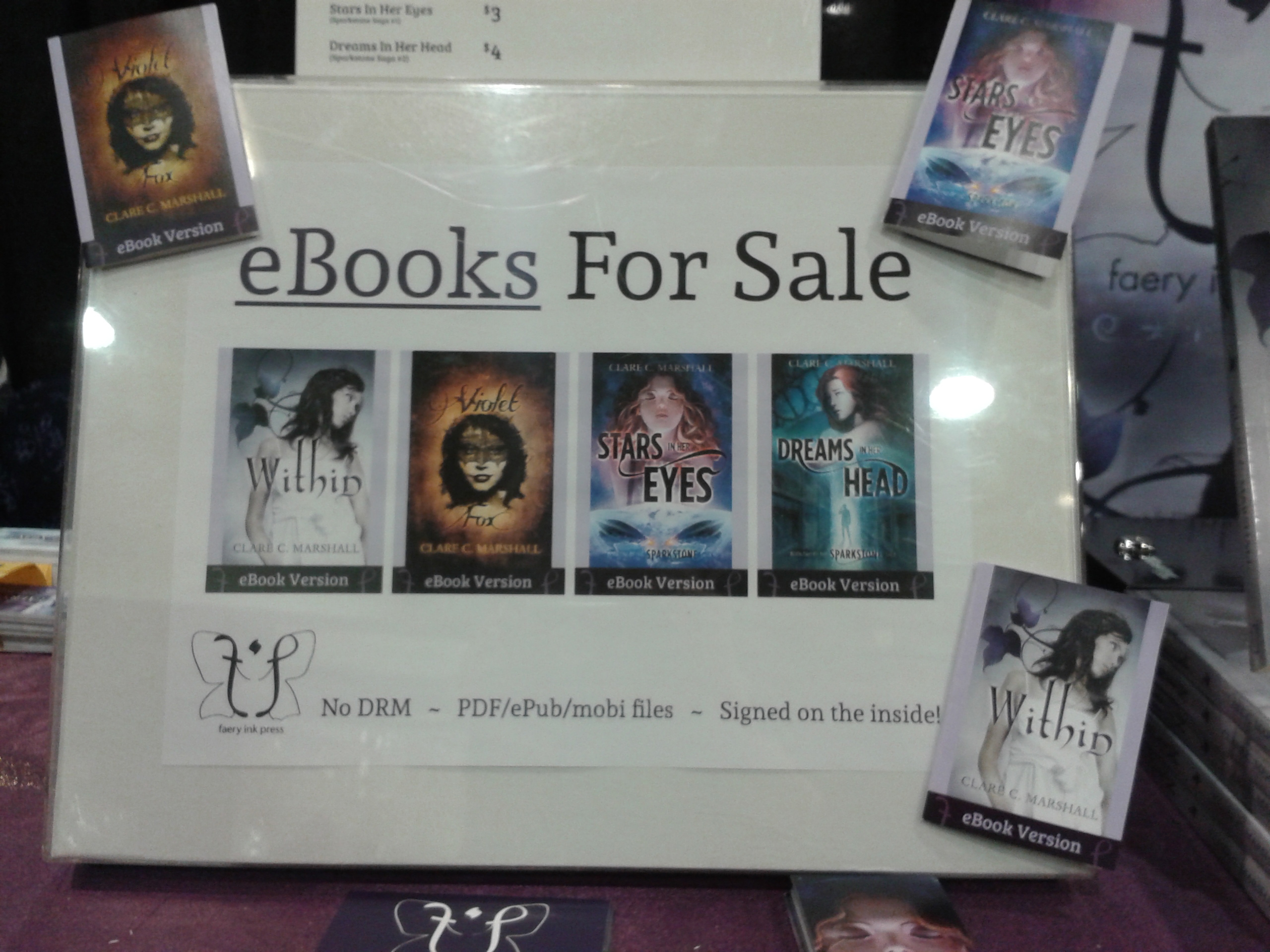 Here is another big improvement on my table display. A proper eBook sign!! No more confusion about what the lil eBooks are. The sign announces I have eBooks for sale, and then I kept them in a baggie in behind. This system worked way better than displaying them like business cards and I got more sales as a result.

On Thursday, I ran a $1 eBook promotion–all my eBooks were $1 each. I sold lots. People asked, isn’t that too cheap? To be honest, I’m happy whenever I make a sale, no matter how small the dollar amount. It means that one more person will enjoy my stories. And who knows, maybe next time they’ll come back and buy the next book at full price. Also, they’re cheap to print, there’s no extra hosting/maintaining cost on my end…so I still make money on the sale. Loss leadering (sort of!) for the win.

My Banner Didn’t Kill Anyone!

If you’ve been reading my previous con posts, you’ll have noticed my continued frustrations with my banner. When we set it up on Thursday, it fell within five minutes. Well, Kate to the rescue! She suggested taping it up to the metal supports. I’ve tried something similar before and it hadn’t worked, but I hadn’t tried it with the new Staples metal ends yet, so I was game. It worked!! We also set it up a little looser than before, so it wasn’t pulling so tight, and it never fell for the rest of the weekend. We still took it down at night, however–I’ve learned from my previous con that cleaning crews can accidentally damage stuff with their vacuums.

I had two types of bookmark, same as I did at Hal-Con. I also put out my business cards. I have none left. People took my business cards more than they took the bookmarks, because my business card is smaller. But people really like my bookmarks. A few people were surprised that they were free–probably because they’re so pretty. Kate and I chatted about having book-business cards. Cards with the book covers on them, and Faery Ink Press and/or book information on the back. This will be something to keep in mind for next year, especially with these huge cons–everyone is fighting for attention and I do want people to remember me and my books.

Then, you get into a sales groove, and that becomes your life for a while. It’s a little frightening how similar each conversation becomes. Are these your books? Yes. You’re the author? Yes. What are these books about? Are these books all in a series? My spiel is mostly the same every time, and I look for the tell-tale signs of interest: eyes lighting up, twitching of hands, body stance. If they touch the book, the hard part is done. Touching means interest, which means a very good chance of sale. Especially with The Violet Fox. People buy that on looks and touch alone.

You enter this semi-hypnotic, anxious state where the outside world falls away and the con becomes your life. I just spent four days doing this, and I guess a new week is beginning, but my body doesn’t know that. To my body I’ve just spent long, long days 100% focused on selling books. So there’s a recovery element, mentally and physically, to these larger cons. 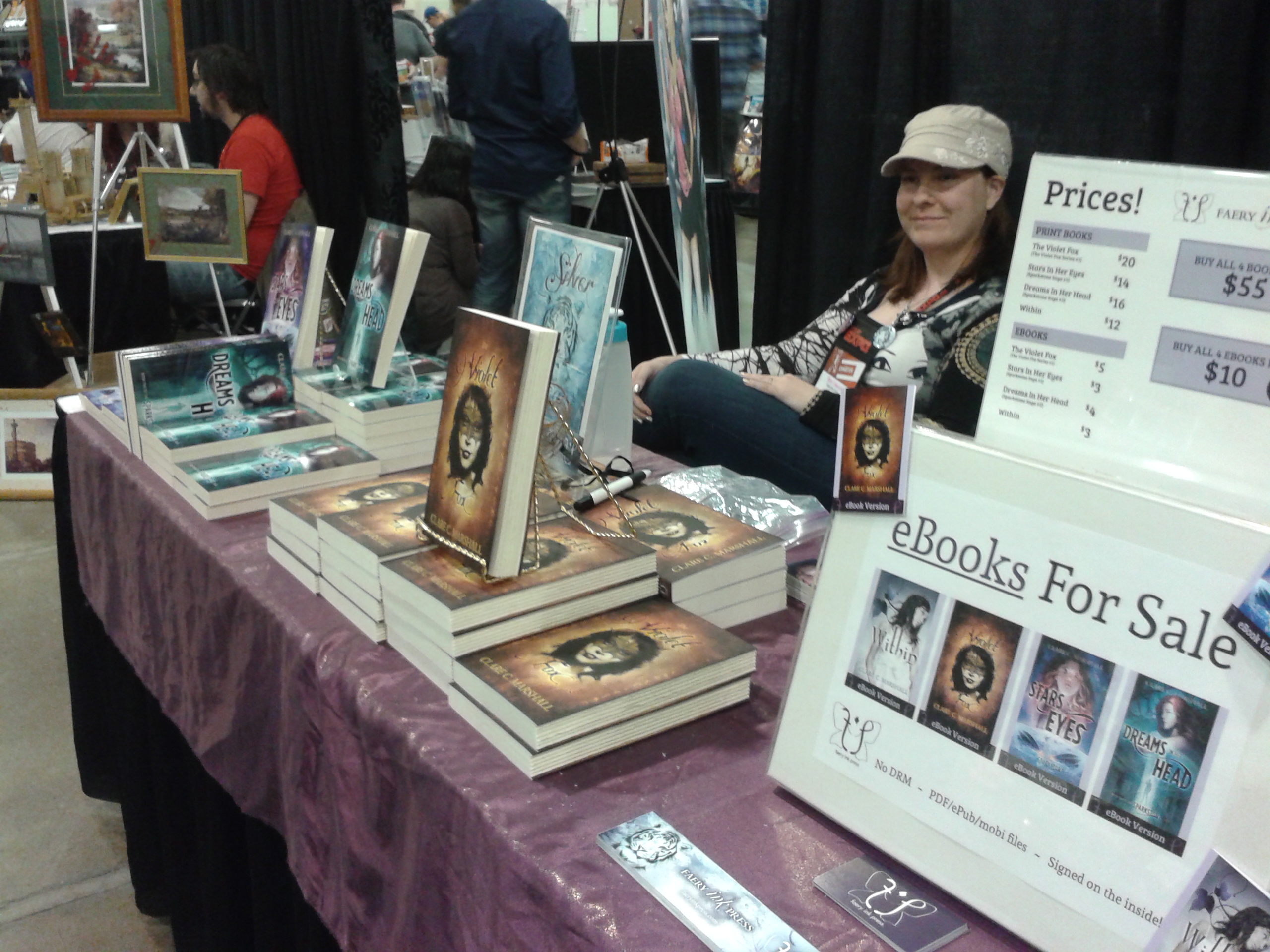 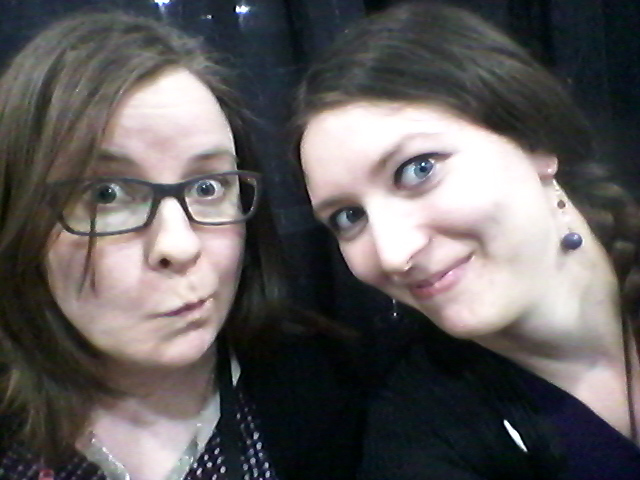 Kate Larking, my assistant and author/marketer/bookseller in her own right, not only stayed with me, covered my table while I was breaking, and sold my books, she procured the cutest dolly EVER CREATED BY MAN. It’s the perfect size for my boxes! 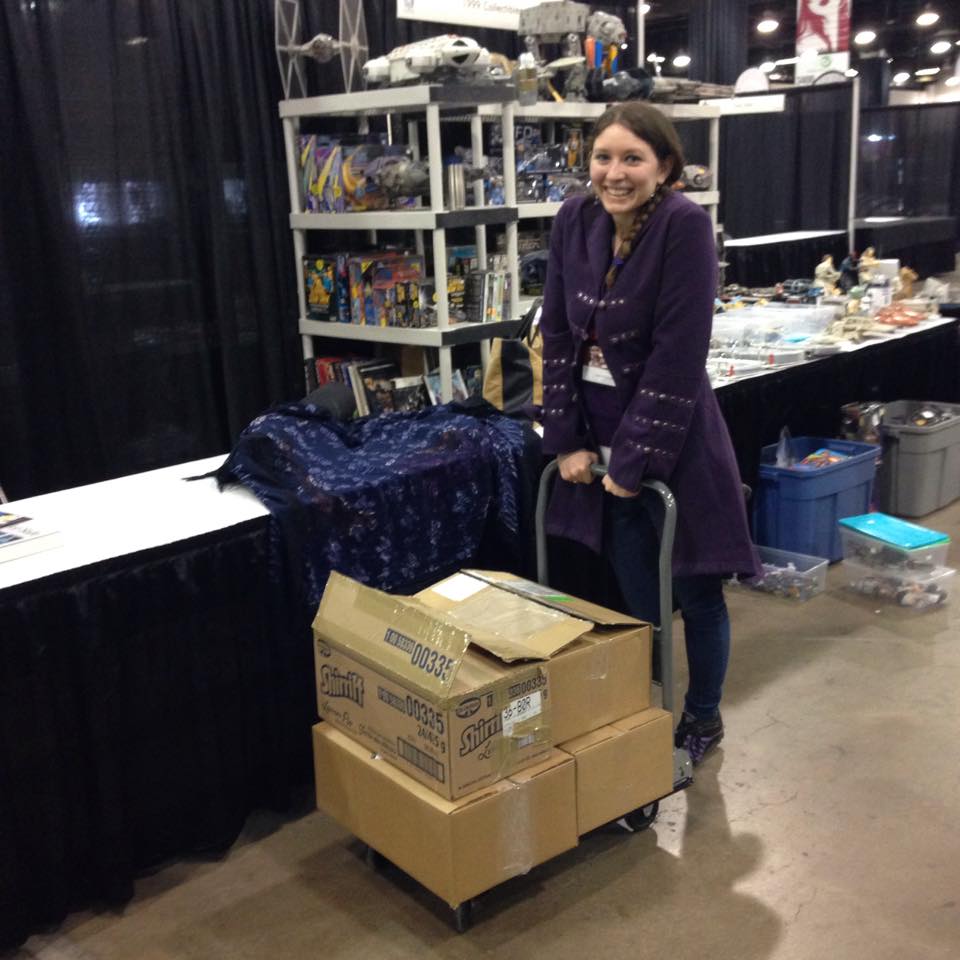 It’s still surprising and humbling to me how people who know very little about my books or me drop $50 at my booth. What if they buy all my books and hate them? I mean, out of four books, it’s possible they’d like one, and the reception for my work is generally positive, but…yeah. It’s a little scary sometimes to think about.

I actually had people recognize me. From previous signings, from other cons–people who had read my books, loved them, and were wondering what was new or when The Silver Spear was coming out. And I have some potential opportunities for more signings, consignments, etc from this that I’ll follow up on. Yay!

I was pleasantly surprised by the number of teenagers that attended. Hurray! Finally! My target audience. I was happy to sell to teens and their parents, and get the opportunity to chat with them. But I was also surprised by the number of parents who “screened” my books for their eleven- and twelve-year-olds. As soon as I mentioned that Within is a little more mature, I’d get, “Oh, no way.” No clarification was apparently needed for what I meant by mature (some disturbing content, violence, adult POV–if you’re wondering). No sex, they’d ask? No, no sex in anything, but some kissing. That’s fine.

I can understand the caution. I’m a stranger, selling strange books, in a strange place. I was just surprised that parents were censoring content for twelve-year-olds. I didn’t have that. I mean, on one hand, it’s not like I had bookstores nearby that I could spend my (or my parents’) money on. But they trusted me to make decisions about what I read–they didn’t need to approve purchases. The worst I’d get is a “You’re reading that?” Or, “You can buy that with your own money!” (The latter of which I did hear several times!)

So, my takeaway from that is, I need to really be clear about what sort of content is in the book when selling to parents & their teen, and if they have concerns, to access them as they come.

The Violet Fox has probably the least mature content in that it has a happy ending, and it’s a love story, and more of a fairy tale–but there is some sad parts (death of an important character) and some violence (she is a fighter!), and when you boil it down, it is about a girl who has lived on the streets her whole life–she has some anger issues that make her act without thinking sometimes!

The Sparkstone Saga is somewhat more mature, but less mature than Within. The Sparkstone Saga has 17 and 18 year olds, and they’re at university, but it’s meant to have a lot of teen issues–and addresses some of the feelings I felt when I moved away from home for the first time and into a new environment. There’s some LGBT themes, some violence, kissing (and more kissing later!), death, and hopelessness, but also new friendship, strength in the face of adversity, and expressing and defining your inner talents. 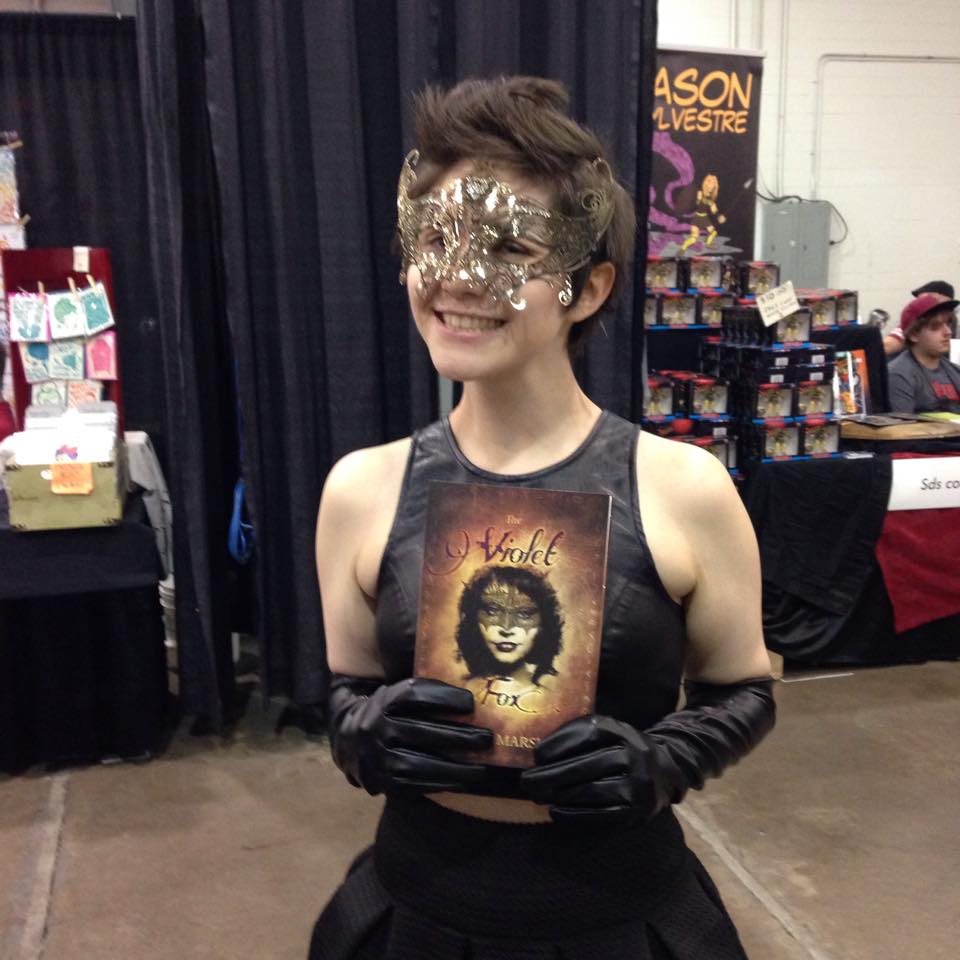 I was happy to see my writing and publishing friends. Overall I was in a good vendor row, everyone was friendly with each other. I was especially happy to meet Abby Howard, one of my fav comic artists! She drew me a faery kitty. She was sharing a table with Kel MacDonald and we got the opportunity to chat about various things. Hopefully I get the chance to see them again at other conventions! ^_^ 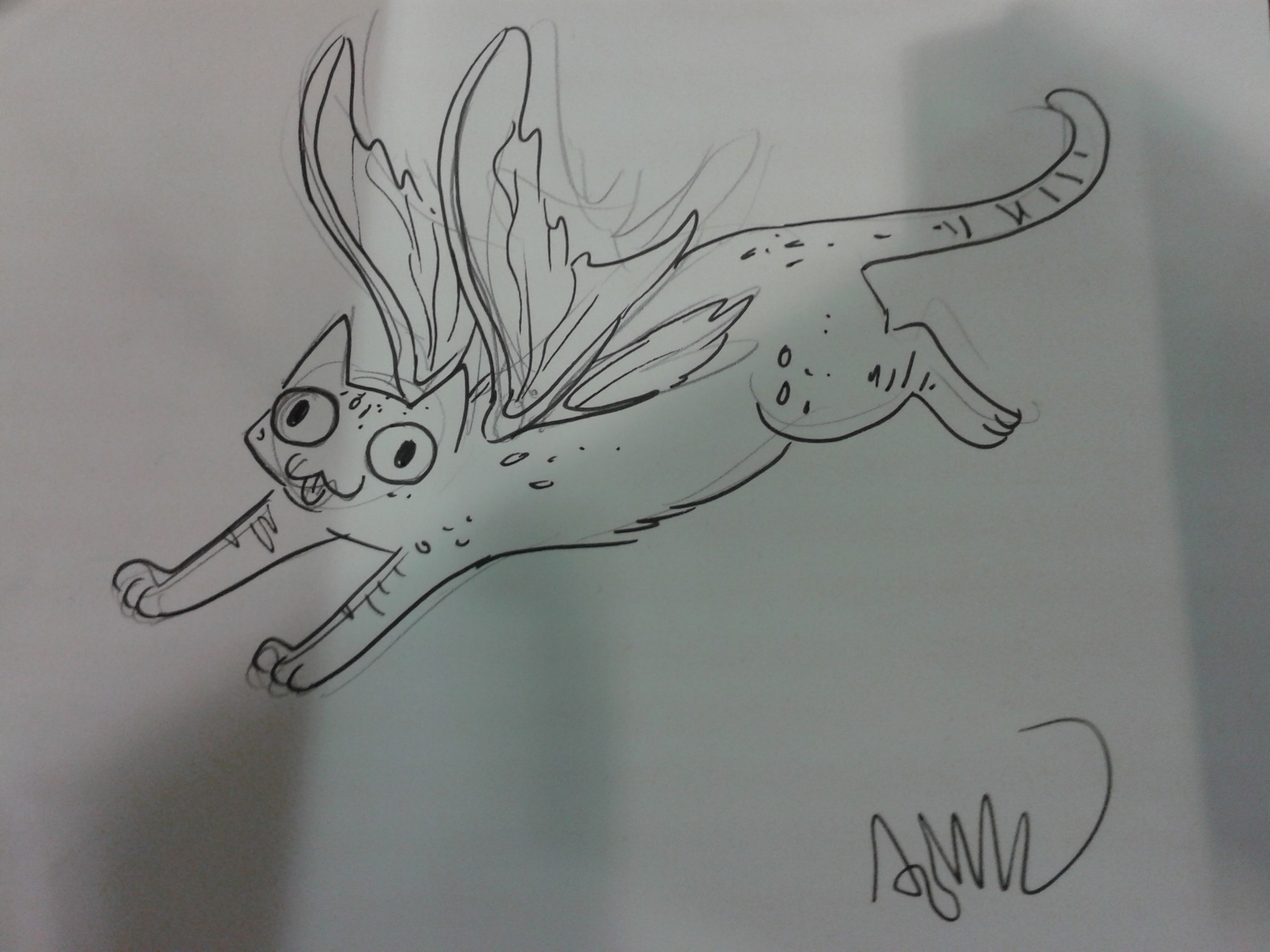 Yes, yes, yes! This is a major con and I was super happy to even get in. I’m guaranteed placement next year and have the option to upgrade to the BMO Building–which generally seems to have more traffic.

At least 10 people asked me if I was going to the Edmonton Expo. I said…no? But I’ve gone and applied anyway, even though I think vendor space is mostly sold out. So we’ll see!