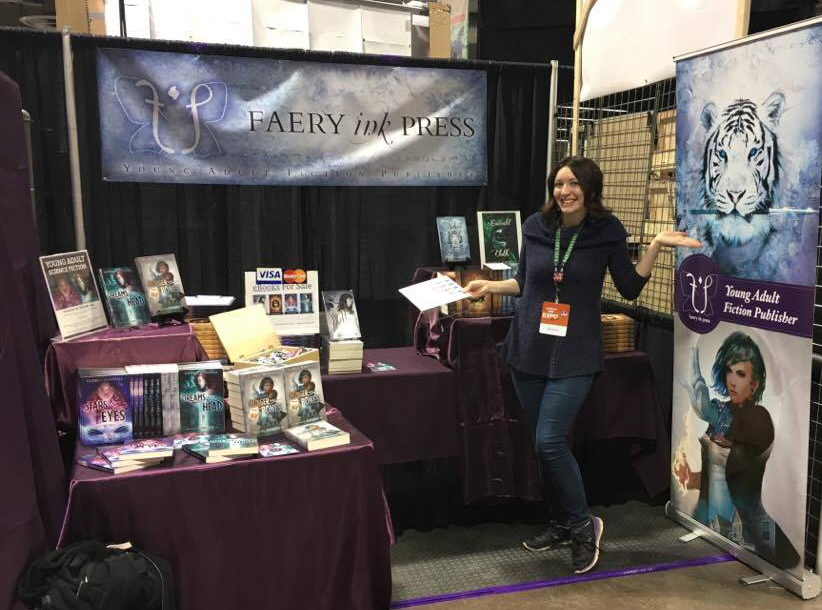 Phew. First con of the year, done! This convention is the first of a busy THREE WEEKEND convention travelling trip that includes Fan Expo Regina and Ottawa Comic Con. If you look closely in the picture, you’ll see a sneak preview of The Emerald Cloth cover (full cover reveal coming soon).

Also, look, I have new hair!! Bye-bye purple and blue, hello regular brown. It hasn’t been this short since I was a young teen. 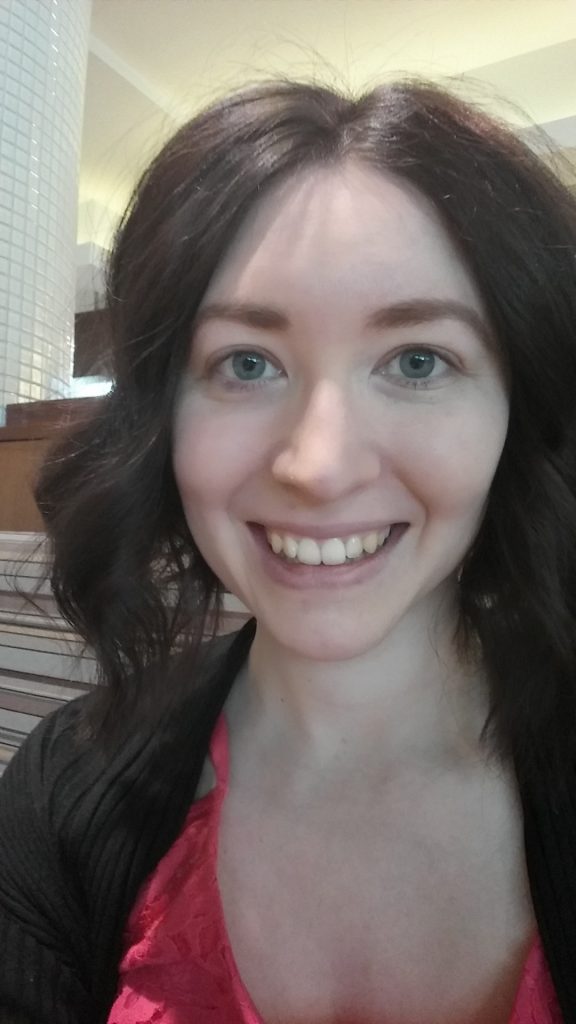 Calgary Expo is currently one of my biggest cons on the roster. Attendance was down from 103,000 to 95,000 this year. Four-day cons are long and exhausting. Aside from some help from Kate and my editor friend Jessica, I was alone for most of the con. This made for a lonely time when it wasn’t busy, which was unfortunately more than I would have liked. Many thanks to Dave who spent hours helping me set up! <3 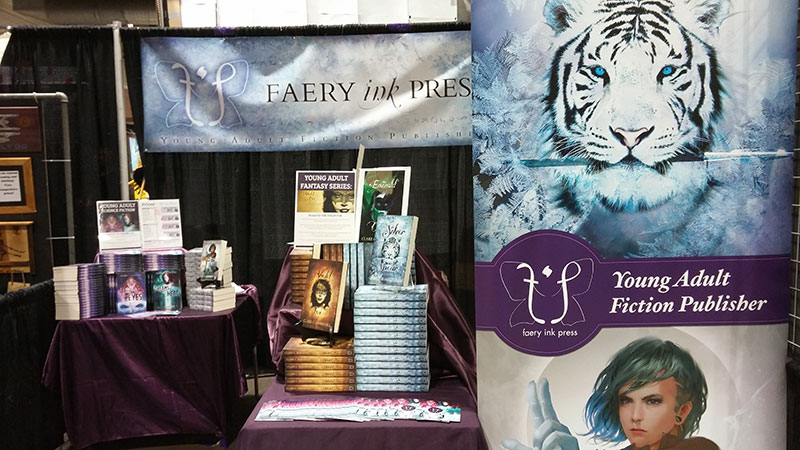 I tried several arrangements for this con.

The difference between a 10×10 booth and a single-table space is astounding. Twenty square feet is a lot to play with, and I think I got a little blindsided by the opportunities. On Thursday, I tried out a radically different approach, something I’d wanted to try for a long time. I used the long, 10ft table along the side of the booth, and brought an extra table to create an L-shape, inviting people into the space. I was hoping that people would walk into the space to reach the books.

That is hubris talking. Of course I think people want to walk in and touch my products because they are pretty. The reality is, a lot of book people are shy, and the idea of going into a place where they may feel pressured to buy sucks. It’s a similar problem to the one Chadwick and I encountered at C4 last year. I thought I’d eliminated the issue by standing behind the table, but ultimately, my covers have to be in people’s faces for them to notice them amongst the other visual distractions, and as a person I have to be front and center to catch people’s attention. 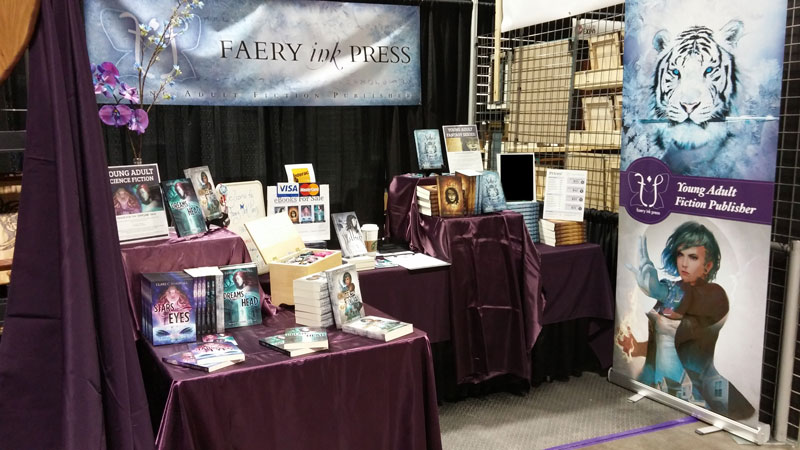 So on Friday, I changed gears and we re-did my table space. People still had to venture in a little, but it was a much shorter, cozier distance than going ALL the way into the back. I also had a mat on the floor to give the feet a break from the concrete! This mat became super dirty and gross by the end of the four days and I ended up throwing it away.

Once my display was settled, I quickly found the brisk sales I was accustomed to. Now that I know I’m not ready for large L-shapes, I can go back to my U-shape, which works well. 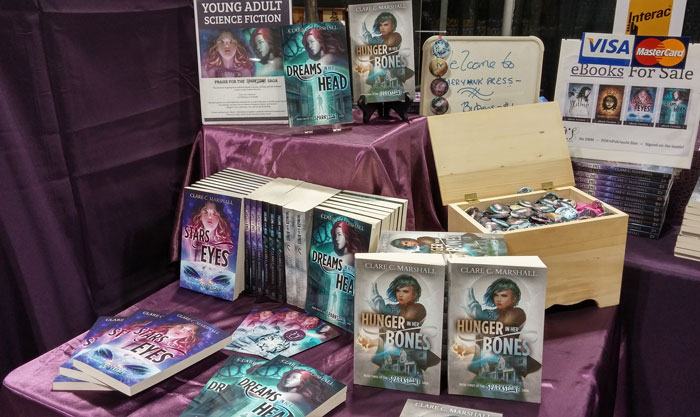 Hunger In Her Bones looks SO GOOD! This is my first convention with my newest book. It arrived two days before the con. I had several compliments on its appearance and production, and it was easily the most-picked-up book on the table.

I had ridiculously high expectations for this convention. I thought that by changing my location, I’d be doubling my sales. Not so! Instead I did about the same as last year.

I had a lot of return customers! It was so exciting to have people approach and ask when The Emerald Cloth is coming out. Equally exciting was the number of people who returned to buy Hunger In Her Bones. Not as many eBook sales – I was expecting many more eBook library sales, I think I need to drop the price to $20 instead of $21.

The Sparkstone Saga outsold The Violet Fox Series this time, and Stars In Her Eyes hands-down beat out all my other books. This is due to it a) being at the front of my display b) Hunger looking so damn good c) many people have already read The Violet Fox Series, so I’m getting them on my scifi series while they wait for The Emerald Cloth.

Thursday was not as I expected, possibly because of my display. Friday was good. Saturday was also good. Sunday was weird! Perhaps it was my lack of sleep, but people were just not interested in interacting with me, as hard as I tried to engage. It got to the point where I was starting to wonder if I had something on my face.

Within continues to quietly grab sales. I desperately need another horror/thriller book to grab those horror dollars and bridge that gap between it and the other books. Originally I had one scheduled for this year but I dropped it in favour of focussing on The Emerald Cloth.

Ultimately, to maintain and maximize my profits for this space, I would have to have far more than five or six books. In general, if I want to increase and maximize my sales, I need to have a couple of new books each year. The first time someone comes to my booth, they’re spending $35-$45 on books. Occasionally more. But then they’re coming back only for new stuff: $20, max. As I reach market saturation for this con audience, I have to increase production to maintain or exceed my previous sales.

Hurray! FINALLY! I signed up for a Moneris account, which connects to my business bank account. Signing up was fairly straight forward, and the reader arrived in the mail about a week before the convention. I pay a monthly fee for the service. 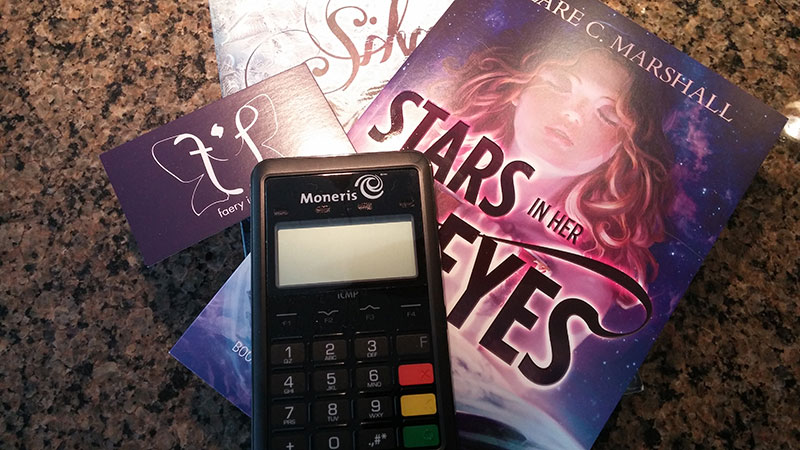 The breakdown of my customers paying habits: 58% cash. 42% card.

HALF of my card-paying customers used debit, and more than a few said things like, “Oh you take debit, I’ll buy a book!” (Note the difference between that and “I’d like to buy a book, do you take debit?”)

The only trouble I had with it was on Thursday. Turns out, I didn’t tether the machine correctly with my phone. Fortunately, all I had to do was reinitialize the connection, and it worked well for the rest of the weekend! Many people were relieved that I took debit, and others were impressed with the professional nature of the reader itself.

My booth neighbours used Dream Payments, which I found very intriguing as they don’t charge monthly fees and you outright buy the little card reader for about $100. They’re a new company so I’ll have to keep an eye on it. I’m committed to using Moneris for now. 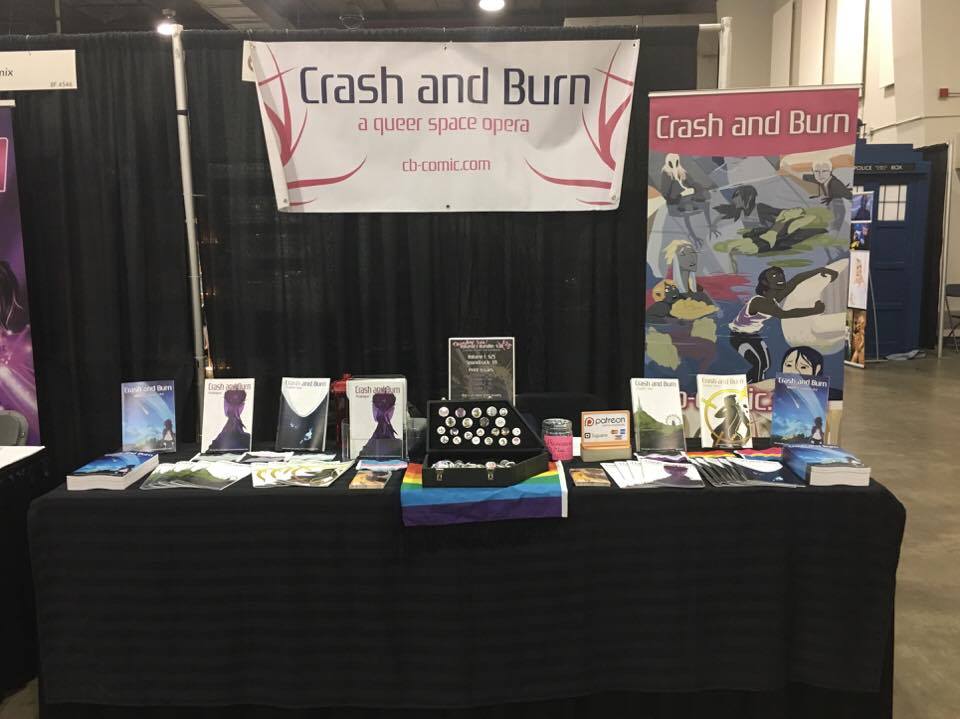 Last year, I gave Kate some of my table space so she and her friend Finn could sell their wildly successful comic, Crash & Burn. They had their own table this year in the Big Four Building, and unsurprisingly, they sold TONS of their first-ever volume of the comic, which is a collection of the first four issues. Not only did they have media interest, the Alberta minister of culture and tourism checked them out as well. You can check it out for free on their website, but if you’re a cool bean you’ll back them on Patreon. Thanks so much to Kate who helped me throughout the weekend and made sure that I didn’t die.

One of my favourite parts of going to cons is seeing my fellow creative entrepreneurs. I feel such kinship with people who make money from their art. I had the privilege of eating too much crème brulée with Greg Chomichuck (slowest eater of all who live), Andrew Thomas, Gibson Quarter, Scott Henderson, Justin Currie, and many others. Less fun was going home on the train at midnight and then having trouble sleeping because of all the good food!

Scott Henderson and I had many good chats throughout the weekend. He is an extremely talented, award-nominated artist who I think doesn’t get enough praise and attention. Not only has he done artwork for Highwater Press, but he also has his own graphic novel series, The Chronicles of Era. Everything I’ve read from it so far is really good, and he has the kind of artwork you can return to and find something new with each inhalation.

I also briefly got to see Hope Nicholson again, but our busy schedules didn’t allow us much interaction time! She’s promoting her new release from Quirk Books, The Spectacular Sisterhood of Women. I hope we can chat more when I’m in Winnipeg.

Ella Beaumont, formerly the acquisitions editor at EDGE and now the operating force behind her fiance’s ambitious writing-publishing endeavor, visited my table a couple of times as well. I always enjoy my chats with her. We have a lot in common and I enjoy her enthusiasm about the business.

My booth was in between two woodcraft companies! To my right was Pickering Woodwork, and my left, Charlie Rabbit. I really admired a lot of the work that went into their art. Charlie Rabbit had an especially impressive display, they basically built a whole structure around their space! Pickering Woodwork, for their second con, seemed to be extremely organized and had brisk sales the entire weekend. Yay!

Besides all my friends and fellow creatives, thank you to everyone who came up to me and chatted about writing, publishing, and making a living with your art! I LOVE talking about what I do–and I love giving people a dose of realism about the business.

Improvements for next time:

Thanks for reading, come back next week to hear about my adventures in Regina! I leave you with a still from my new sitcom, Clare & Tiger. It’s grrrrrreeat! 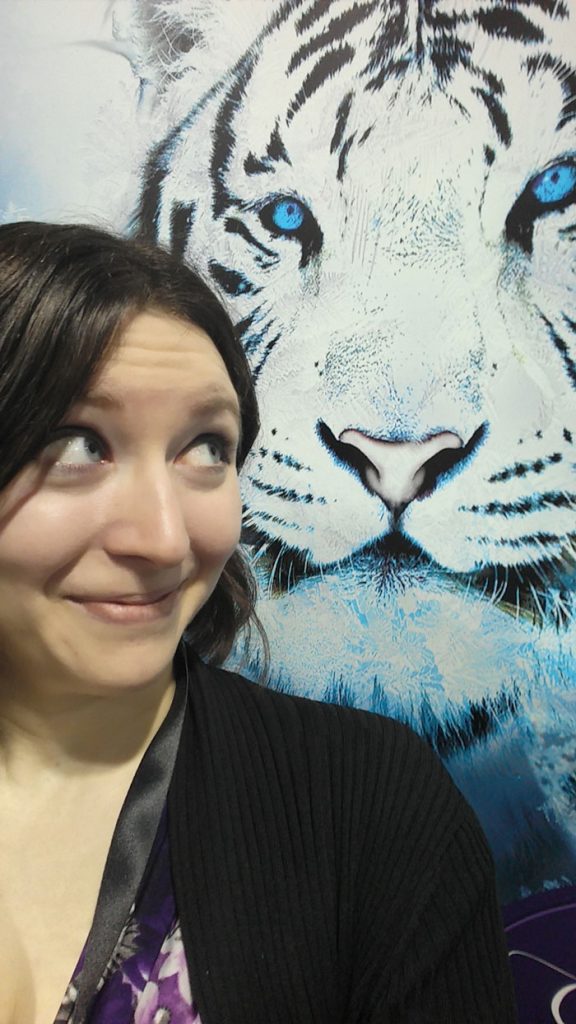