Deleted Scene from Within 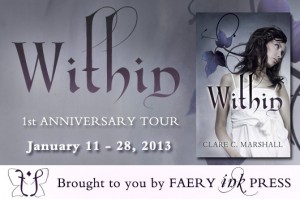 I hope you are all enjoying the Within Anniversary Tour so far! Don’t forget to enter the GIVEAWAY, where you can win a physical copy of Within (open internationally!) and Faery Ink Press swag!!

Today, I bring you a never-before-published deleted scene from Within. I deleted this scene for a couple of reasons. First, I felt it made Trinity, the protagonist, seem too young. Second–and maybe most important–it didn’t serve any purpose in the narrative other than being a little shocking, and sad. It originally went before the dinner party at Trinity’s house with Wiley Dalton.

Each morning, Stephanie woke at six AM. She kissed her husband, got out of bed, showered, and dressed herself. Then she went into Trinity’s room, and picked up the papers on the floor and stacked them on the desk. Usually Trinity would be awake at this point, her blankets tucked under her chin and her big blue eyes staring up at the mother, as if knowing that now was the time to wake up.

“Need to go to the bathroom?” Stephanie asked.

She climbed out of bed and tiptoed to the bathroom, and shut the door before Stephanie could get in there with her.

“Do you need any help?” she asked.

She finished tidying Trinity’s room and then went downstairs. The coffee maker had been set the night before (thank goodness for coffee) and seeing the dark liquid fill her mug and then bringing it to her lips—it was like a little bit of heaven. Those few precious moments were hers. No campaign, no Trinity to care for, no story about hobos getting murdered. Just sweet, delicious coffee.

Stephanie stood alone in the kitchen, listening to the birds chirping outside and a lawn mower roaring down the street. She downed half the mug before realizing that she hadn’t heard Trinity come out of the bathroom yet.

Placing the mug on the counter, she headed cautiously for the stairs. “Trinity?”

The stairs creaked beneath her brown flats as she climbed. The bathroom door was at the top, and the light and the fan were on. She had better not be trying to take a bath by herself, Stephanie thought. But there was no water running.

“You okay in there, Trinity?” she called out.

She knocked on the door. When she listened closely, she heard a slight peeling noise.

Trinity sat on the toilet with only a t-shirt and no underwear, and her legs spread wide. A box of Band-Aids lay on its side on the counter, with unopened bandages spilling out. Bits of unpeeled Band-Aids were scattered on the floor. Trinity had one stuck to her forefinger, and she placed it carefully over her vagina. There were drops of dark red blood on the floor, on the Band-Aid box, and on Trinity’s fingers.

She looked up at Stephanie, tears streaming down her face. “It won’t stop bleeding.”

***
Intrigued? Check out more samples & learn more about the book itself. 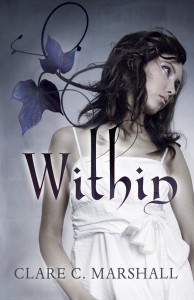 ENTER THE GIVEAWAY TO WIN!