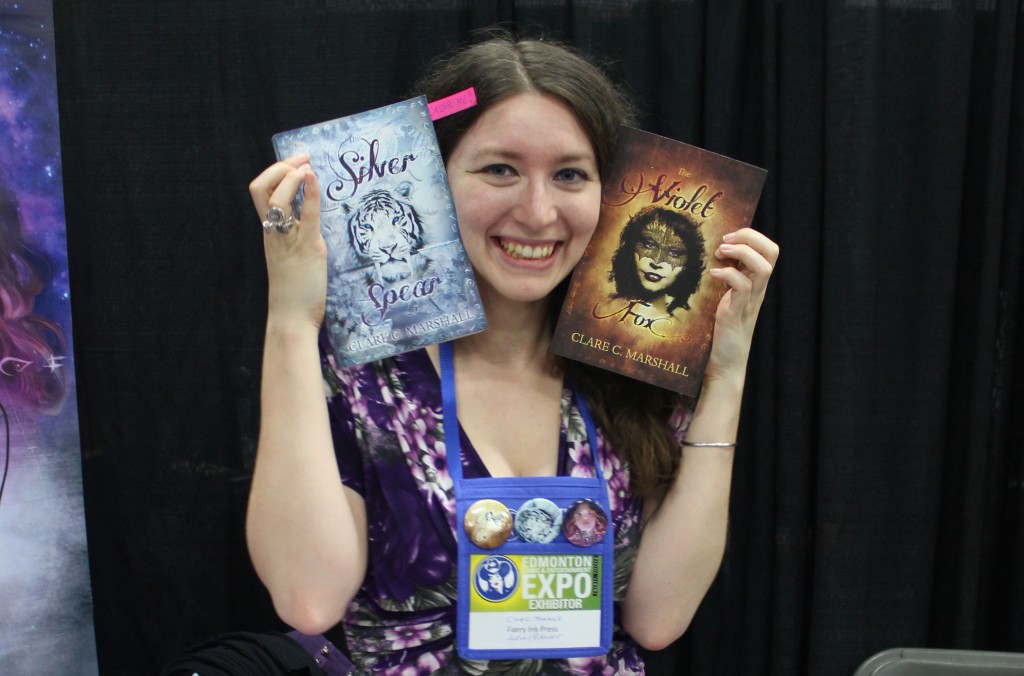 Back from yet another con. Didn’t I just write one of these? It’s that time of year where all the cons are happening at once. If only this book were a time book and then I could be everywhere at once.

This was my first time to Edmonton, and despite what the Calgarians say, it’s a very nice place. The long residential streets lined with fall trees reminded me a bit of Halifax and Winnipeg, and downtown Edmonton is far more approachable than Calgary. I am fortunate to have relatives there so I was able to lodge for free, and my good friend Richard took me around and also helped me out a lot (yayy!) so I was thankful for that.

The Edmonton Expo has a pretty similar set up to the Calgary Expo, which isn’t a surprise, since they’re run by the same people. We had a bit of a trial actually finding the correct entrance for vendors, and had to walk around and around the centre a few times. Exercise! What’s nice is that you get a variety of vendors without the overwhelming stimuli of the Calgary Expo. Everyone was spaced out appropriately–I wasn’t directly competing with any other authors in my row. I was also between two people with very eye-catching displays/products, which meant that people stopped and lingered long enough to also check me out.

The Silver Spear delivery missed the Expo by about three days. Which is unfortunate because I probably would’ve sold a lot of them. I had the proof copy on the table to entice people to order, and it was usually the first thing people went for! It’s definitely my favourite cover. At least I was able to take some orders. I’ll have them at Hal-Con for sure 🙂

The thing about travelling to conventions in other cities (and especially in other provinces) is that you’re limited by your luggage. I pack as much as I can into one suitcase when I’m travelling somewhat local to save on costs, and that means sacrificing some of the set-up pretties. I felt my display lacked something this time around. I definitely felt the absence of my button box: I couldn’t fit it in my suitcase or backpack. I brought what books I thought would sell, but since I was limiting myself, I felt my table looked empty compared to when I can load it up with however much I want.

A big thing I noticed is that almost everyone in my row had a banner hanging behind them. That’s something I desperately need now. My stand-alone banner isn’t cutting it by itself, especially when it’s only half visible most of the time. I need something to hang behind me. Granted, not every Expo has a space where I can do that, but at these big cons, there almost always is some kind of curtaining exactly for this purpose. So I’m shopping around for banners for next year.

I was somewhat disappointed in my sales for this con. I expected more. I think I was hampered by my location. By the time people found me, they were out of money–if they found me at all. In addition, Friday was super dead. They probably could’ve gotten away with just doing two days of the con.

The Violet Fox sold the most, as usual. Surprisingly I almost sold out of Within–not sure why that one caught everyone’s eye. Also surprisingly, the Sparkstone Saga sold very little. Usually Stars In Her Eyes and The Violet Fox are neck-and-neck. I think The Silver Spear‘s cover is just so strong, people gravitate towards that, and then buy The Violet Fox when they figure out that that’s the first one in the series.

Also, I had a couple of people recognize me from Calgary Expo, hurray, and approach me and say that they/their family member enjoyed one or more of my books!

“Does anyone actually buy these books?”

“Is anything on this table free?”

Yeah, this was a con of strange questions. And yes, those are actual questions asked by actual people.

Are these books popular? Depends on what you mean by that. Am I a bestselling author? No. Do people who read my books love them? Generally, yes! To the point that they recommend them to friends? Often, yes. It’s not uncommon for a person who has bought my book to drag a book-loving friend and make them buy their own copies. Becoming popular is a process. You just have to keep showing up. If you’re trying to gauge how good a book is by how popular it is, you’re not going to have an easy time, and I point you to recent past commercial successes that have been widely panned.

Also, you should make up your own mind about whether or not you’d like the book and use that to inform your purchasing decision…and not rely on “what’s popular.”

Does anyone actually buy these books? Obviously I wouldn’t be able to do conventions if I didn’t sell anything. This one probably insulted me more than the first question. Again, the girl was trying to (I think) make her purchasing decision based on other people’s past purchases. Yes, people buy my books. It would be easier if I had better distribution, but hey, it’s a process, I’m working on it.

Is anything on this table free? This one came from left field. I had to ask him to repeat the question. Bookmarks are free. My business card is free. He said he wanted something as a souvenir. Um, a souvenir…that’s a very specific word that gave me the creeps! I don’t think English is his first language, so I’ll give him the benefit of the doubt. He took some bookmarks and moved on, and didn’t talk to anyone else in the row. WEIRD.

…but not debit. You know, I thought I’d increase my sales by having credit as an option, but I think I lost $50 in potential sales because I didn’t take debit. Well, Square doesn’t do debit, sooo…yeah. The number of mobile payment processing companies that provide Canadians with readers seems to be pretty slim. To take debit, I’d have to have a whole separate machine, and pay some kind of monthly fee. So…no thanks.

Also, taking credit cards made me realize how much I need a much better phone! The app kind of ground everything to a halt on the device. Still worked, but it was slow. But that is a relatively easy thing to improve.

I think so. It’s close enough and doesn’t cost an arm and a leg (maybe just an arm). Next time, I’ll try to get a better spot, and maybe drive up rather than take a bus, so I can have all the supplies I need, and a better banner!