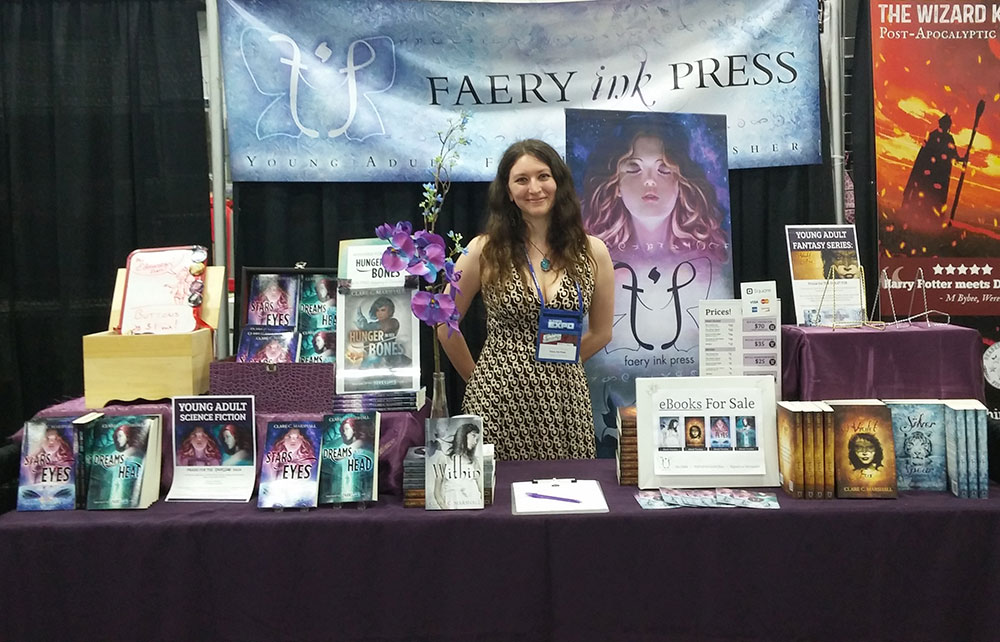 It has been a busy week! First Saskatoon Expo, now Edmonton, with barely enough time in between to do my client work. While I have a lot to do to prepare for C4 next month in Winnipeg, I’m glad that I have a month to catch up on everything else.

I’ve been to Edmonton three times this month–once for a wedding, once on the bus on the way to Saskatoon (I know, they took the long way), and now for the Expo. Dave came up with me this time to help me out and just generally get away for the weekend. Total attending the Expo was 40,000 – down 10,000 from last year. Even with Carrie Fisher attending, the effects of the Alberta economy can be seen at the Expo. In talking with most other vendors, the general impression seemed to be that people have less disposable income, there are more independent authors vying for attention, and lots and lots of people selling the same merchandise.

However, there have been some improvements. Last year, the tabletop gaming was completely surrounded by curtains, and blocked the customers’ view of my table. No one could find me, and by the time they did, they’d run out of money. This year, there was barely any tall curtaining around the gaming area, and you could easily see my banner from afar. I was also further down the row, close to the regular booths. I believe this significantly impacted my sales.

The type of section I was in is called the Economy/Small Press section – aka, pretty much a regular booth size, but in a worse location. I should mention here that like last year, the tables and the pipe and draping were situated in such a way that I had to either CRAWL underneath the table or walk through my neighbours’ spaces and then limbo under some pipe to actually get into my booth. We mentioned it to the organizer, and they’ve promised to change that for next year – but jeez, I usually wear dresses and comfortable heels to these things. I don’t mind maneuvering, but it doesn’t leave a professional impression if I have to crawl under a pipe, one hand over my boobs, another over my butt just to get to my space. Also, what if a vendor was physically disabled, and was placed in this area? How would that be handled? It’s a massive oversight that added to my sense of frustration upon arrival.

Anyway. This booth type attracts the larger artists and smaller authors/publishers. So almost the entire row was filled with books by independent authors–Adam Dreece included. We were neighbours again for this convention. While it’s nice to have someone next to you that is facing the same challenges in the same industry, I disagree with this practice of putting all the book people together. It benefits the book enthusiast to find all books in one place, but it increases the competition for attention. Books are an active sell. It’s not like art, where you look at it and you know if you like it. Books sales require “at least a five minute conversation,” as Brian Hades said as we discussed the situation. You engage a person once in a conversation they don’t want, they will ignore the rest of the sellers in the row if their products are similar. It’s a delicate balance between actively engaging our audience and drawing them in passively with our display.

Next year, I’ll spring for a booth in the regular section so I’m not competing as much with similar products. 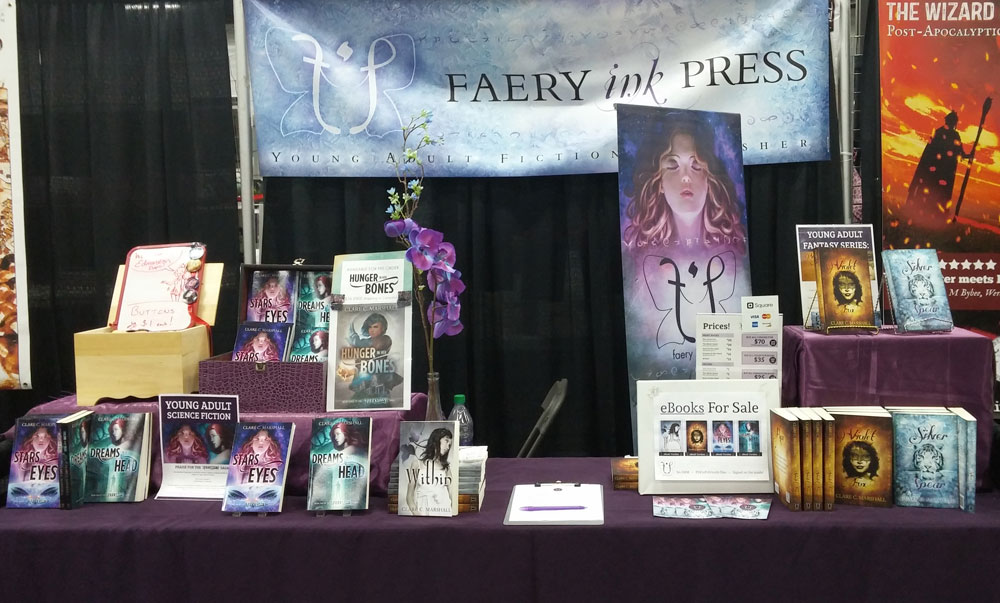 I copied my display from Saskatoon Expo with some modifications. I gave about equal weight to the Sparkstone Saga and The Violet Fox Series in terms of display and placement. I like placing them like castle turrets on opposite ends of the table, as it gives me space in the middle to sign and generally stand/be visible. I put Within in the middle again, just as I did at Saskatoon. My newsletter signup sheet right next to it attracted just over 20 new subscribers. 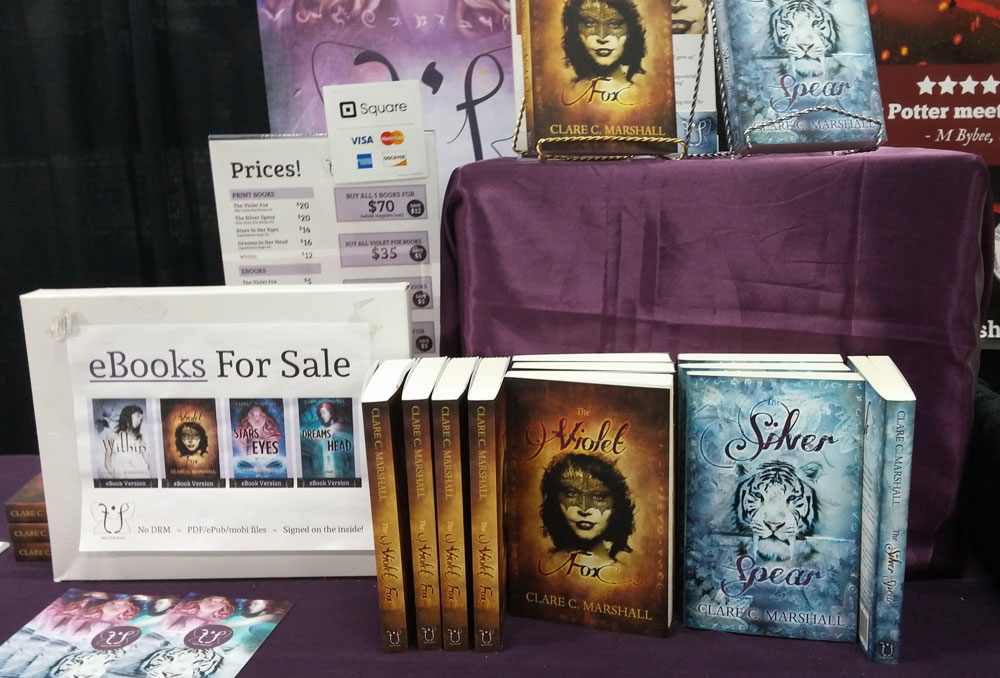 My poor vertical banner held up well throughout the weekend, but I’m going to have to put in more grommets to my horizontal banner so that it doesn’t droop in the middle. I ended up taping it up on the last day, and that held. 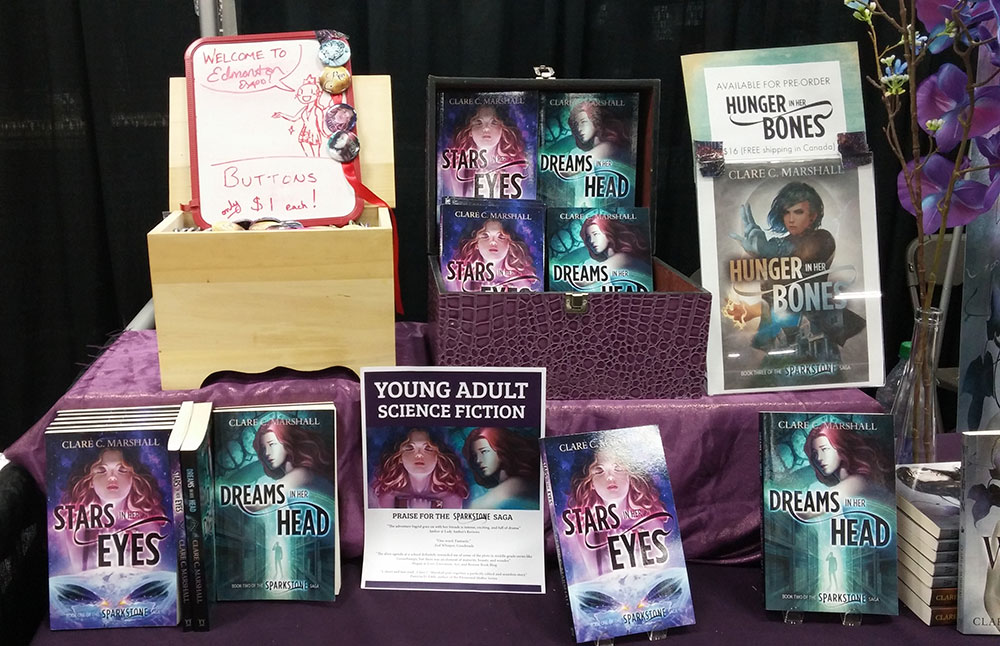 I’m going to have to get at least one more stand from Staples to hold the reviews for the Sparkstone Saga, as I’ve just been propping that up on other books or taping it to the fabric. Also, because I’ve been putting some books spine-out, I should probably invest in book ends. A couple of times, Sparkstone books fell over because they were propped up by the sheer force of books facing out. Just the regular pretty display problems.

I did extremely well at Edmonton Expo – I surpassed my sales goal! It’s my second-biggest con, and I happily report it’s my second-biggest show sales-wise (first place is still Calgary Expo). While I was hoping for this, I was worried due to my location and overall vendor talk about the economy being down. I had a surprisingly awesome Friday evening, a good Saturday, and an okay Sunday. I think if I had a sale on the Sunday, I might have done better, but I was also tired, suffering from overstimulation, and people seemed to be, in general, out of funds.

More than half my sales were done with credit cards. Despite my objections to doing debit, I think Edmonton is a card-loving city, and if I want to continue making this con a regular in my schedule I’m going to have to get a debit machine. A couple of times I inconvenienced people by only doing cash or credit. What I hate about the debit thing is I have to pay the monthly fee ($15-$20) to get the machine compatible with my smart phone. So, I’ll probably not do that until April next year, at the start of the convention season – it’s real tempting to get it now, since I have four large shows left on the docket, but I don’t want to pay $20/month during the winter when I’m not using it.

The Violet Fox and Stars In Her Eyes did about equal in terms of sales, even including bundle sales. Maybe one or two more individual Violet Foxes. I had a number of people asking for The Emerald Cloth (next year!!). Even more awesome was I had people telling me they’d heard of the Sparkstone Saga, that their friends loved it and won’t stop talking about it, and that they needed to have their own copy or at least learn more about it. I wasn’t expecting to sell as many copies of both Stars In Her Eyes and Dreams In Her Head–I was down to only four copies of Dreams at the end. On Sunday, people preferred to buy my stand-alone Within, as they wanted to try me out but they didn’t want to spend $15-$20 on my series starters. I was down to two copies of Within by the show’s end.

I sold a couple of buttons, but I think having it on ground level instead of elevated may make a difference in the sales. I sold about 10 buttons at Saskatoon and more interest in them as opposed to three in Edmonton and passing interest. I’ll have to test this at the next show.

My eBook redeeming system seems to be no longer functioning, as I had several people tell me they were unable to redeem the codes. Whether this is due to the system itself, or it’s my handwriting with the codes, it’s clear I have to completely revamp that system for next month if I want to continue selling them. I can also take this opportunity to upgrade the look and method of their sale. I sell all the eBooks as a bundle – about 99% of people don’t buy just one eBook, they buy all of them together. So instead of multiple cards for each book, I’ll streamline it and print one card with all the eBook codes, and make it worth their while to buy the entire library.

If anyone who bought eBooks from me is having trouble redeeming their codes, email me with those codes and I will send you the files. Thank you!

UPDATE: I believe the system has been fixed – please email me if you have trouble accessing the subdomain. Thanks!

On Saturday night, we hung out with Greg, Justin, and their artist friends at a house they rented in Riverdale downtown. Greg had a good idea about how to manage multiple interactions at the table and I may try to implement that at the upcoming shows. I am really in awe at their stamina – they are doing so, so many shows this year, it’s crazy. They are such good storytellers. I didn’t end up seeing their booth this time, but it looked great in Saskatoon. I’ll have more time to chat with them in Winnipeg. Had some good chats with Adam Dreece, Ella Beaumont, Thea van Diepen, and S. G. Wong (pic below by Adam)! 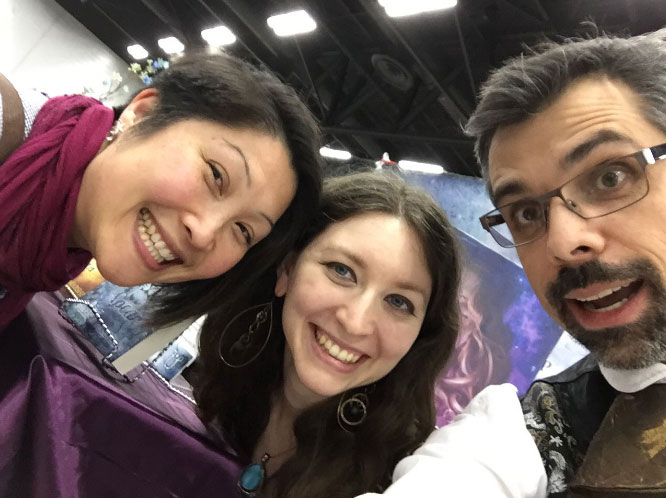 If you’ve been reading all these posts, you know I’ve been suffering with a kind of face-blindness when it comes to these shows. If you come to the table and I ask you, “Have you been here before?” it’s because I’m trying not to re-sell you on something you already bought. I have the same conversations for three days in a row, and everyone starts to look alike, and that makes for some awkward conversations sometimes. At this show in particular, I felt myself calling upon my Alexander Keith Brewery training to help me to connect with people and change things up a bit. If I can learn something interesting about someone, I’m more likely to remember them, and forge a deeper memory. At the brewery, I played various characters in their musical, interactive tour. It was very scripted but there were times when we had to improvise while we waited for another character to make their entrance. During this time, we’d have set questions we could ask the patrons, such as, where are you from? That was my fallback question for this con. Most people were from Edmonton but a couple came from the surrounding areas. I also chatted with a family who had immigrated from Poland, and their daughter had grown up in Canada and really liked to read – in two different languages!

Carrie Fisher and her dog passed extremely close to my booth! Apparently she bought some things from a few of the vendors. Shannon Purser (Barb from Stranger Things) passed by my booth – though I didn’t realize it was her until after I said hello with a mouth half-full of crackers. She grinned and said hello back. I also chatted with Garrett Wang briefly on Saturday and Sunday. He expressed his love for Nova Scotia–he’s going to be hosting a sci-fi night at the symphony at the end of October in Halifax.

I’m hoping to! Apparently Hal-Con comes early next year, on the same weekend as Edmonton Expo. Likely I’d choose Edmonton over Hal-Con just to keep costs down, unless I thought I would win an Aurora. Or unless I was really rolling in the dough, I could do both shows at once.

And now I leave you with a picture of Dave. While he did not win me the GIANT $500 Pusheen, he did give me a tiny purse-sized Pusheen that holds all my change. They’re friends now. 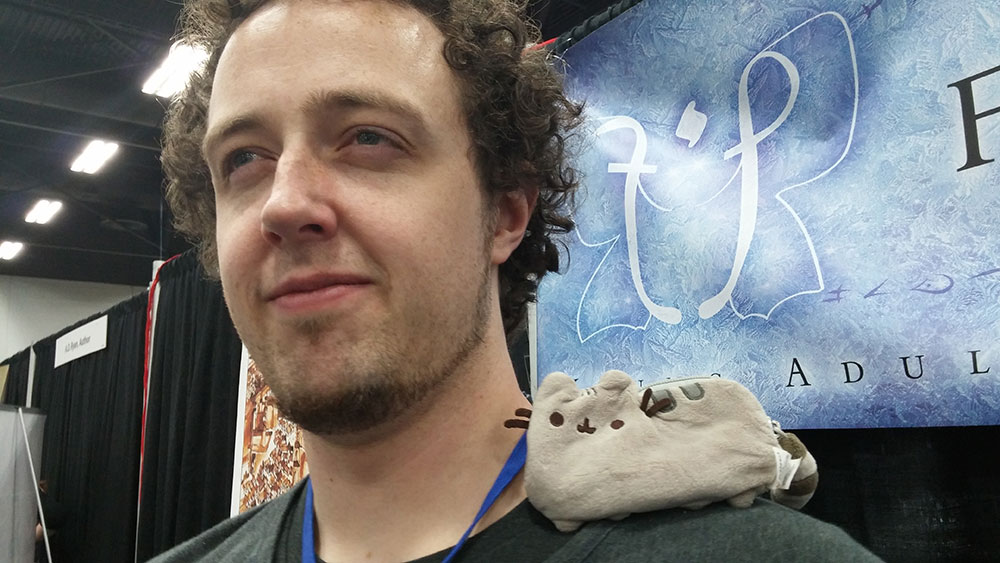