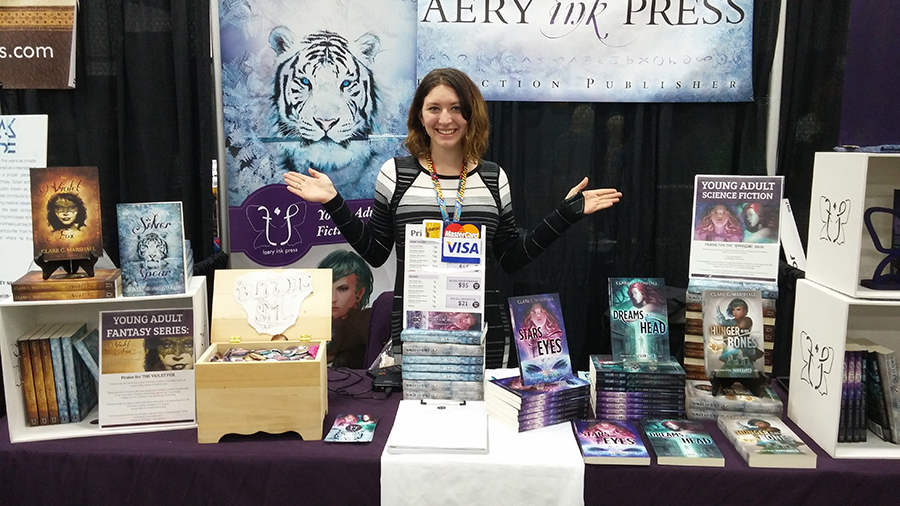 Where did September go? I don’t think I’ve been busier than I have this past month. It was to be expected however – now that I’m entering the last third of the year (the busiest, and the most profitable, in my case!)

This is my third Edmonton Expo, and I’m pleased to report it went well for me!

On Thursday, my friends Finn (half of the Crash & Burn team) and Leif (their roommate and new friend!) picked me up from my place, loaded all my stuff, and we headed up to the northern part of the city. We also picked up Finn’s girlfriend as well. I stayed overnight with them so we could get an extra early start on Friday morning.

THANK YOU LEIF FOR DRIVING US ALL! The car was jammed with stuff–between all my boxes, my banners, the yoga matt, and my display box set–PLUS Finn’s stuff and of course the snacks–there was barely room for four people. I didn’t mind, though. I was grateful. After all our car trips growing up, I’m used to being stuffed into cramped quarters. 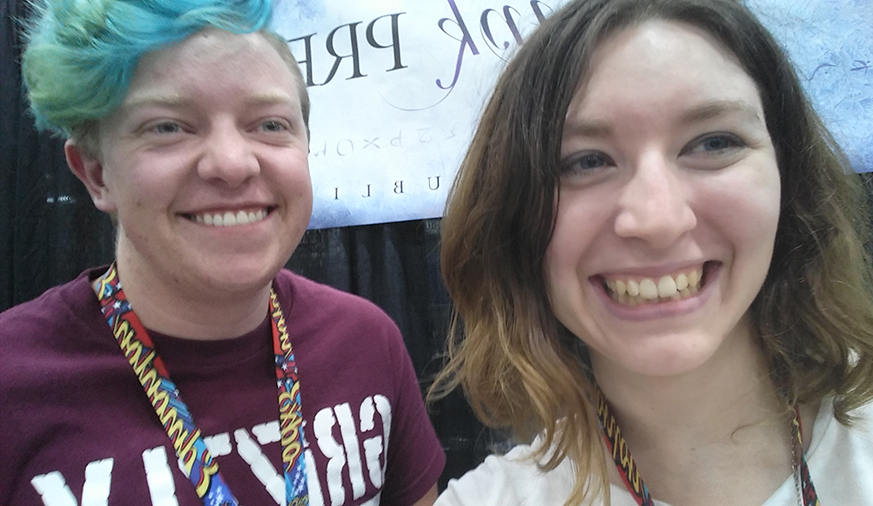 We stayed in the Coast Edmonton Plaza in downtown Edmonton, about a ten minute drive from the convention center. It was really nice! I’m so glad Finn booked it. There’s something really special about traveling and rooming with other people who are also creating art and selling it. It meant we could have quiet time in the evening as needed, or we could chat about the day. It just kept me in the game.

Also, THERE WAS A BIDET.

Something to note about the Edmonton Expo centre is that it is LONG. There is only one entrance, and it’s on the other side from where I usually am. You may recall last year I intended to spring for a larger booth to get out of the small press/economy section, which is at the end of the convention. I had a change of heart about this after Calgary Expo this year, and when the opportunity came up, I declined my upgrade. After being in a 10×10 space, I really appreciated my ability to maximize a 6 or 8ft table, as well as keep my expenses down.

I admit at first I was a little dismayed to discover I was one table over from my position last year. I was worried that my sightlines would be diminished. Fortunately, there were further improvements to my row. Instead of having the gaming area across from us, we had a row of regular exhibitor booths. While this did diminish some sightlines, it increased traffic (in my opinion) because there was MORE to see than just…gaming tables. We were also near the mini donuts and other fast food treats, as well as some kind of Minions-themed laser tag? It made a lot of annoying noise throughout the weekend–mostly I only noticed it when I was tired or when the traffic was light.

I’m still on the fence about putting all book-related people together. It benefits those who love books – and I think serving the customer’s needs is the best way to ensure a sale – though it does create more competition for the authors. Mostly. I think I worried about it more last year. This year, I have more powerful displays, more powerful banners–I don’t get lost in the noise. Usually, if I saw someone with Suzy Vadori’s book or Thea van Diepen’s book, there was a high probability that they would also buy mine as well.

I think in the long run, it’s not going to matter much for this convention whether I upgrade to a larger space. If I think about the long con (haha), Edmonton is one of my cornerstone shows. Now that I’ve done it three times, return guests expect me to be in a particular spot, and I want to optimize the space for maximum profits. At most, I think springing for the corner of my row might be enough. 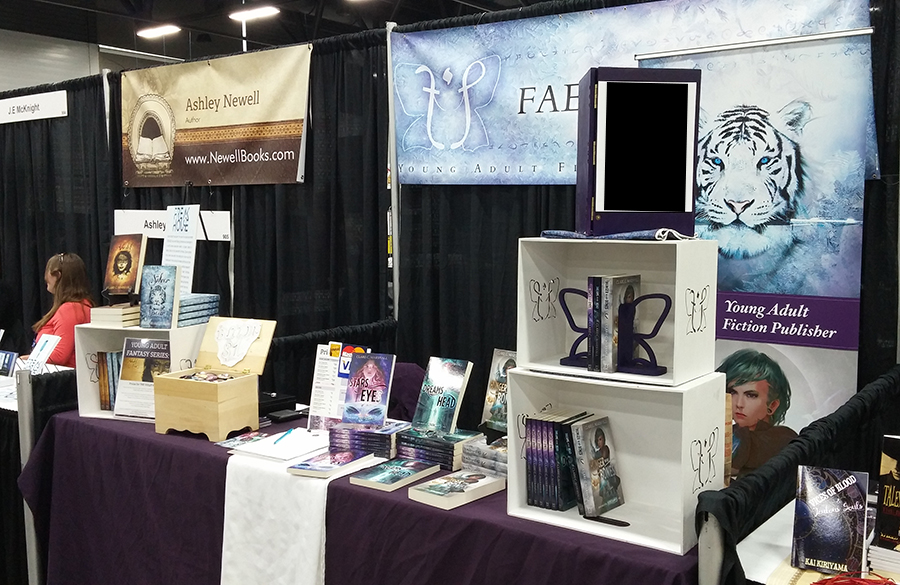 I really appreciated having Leif’s help here! Set-up took under an hour because we managed to tackle the horizontal banner together, and load-in was fairly simple once we separated the Crash and Burn stuff from mine. 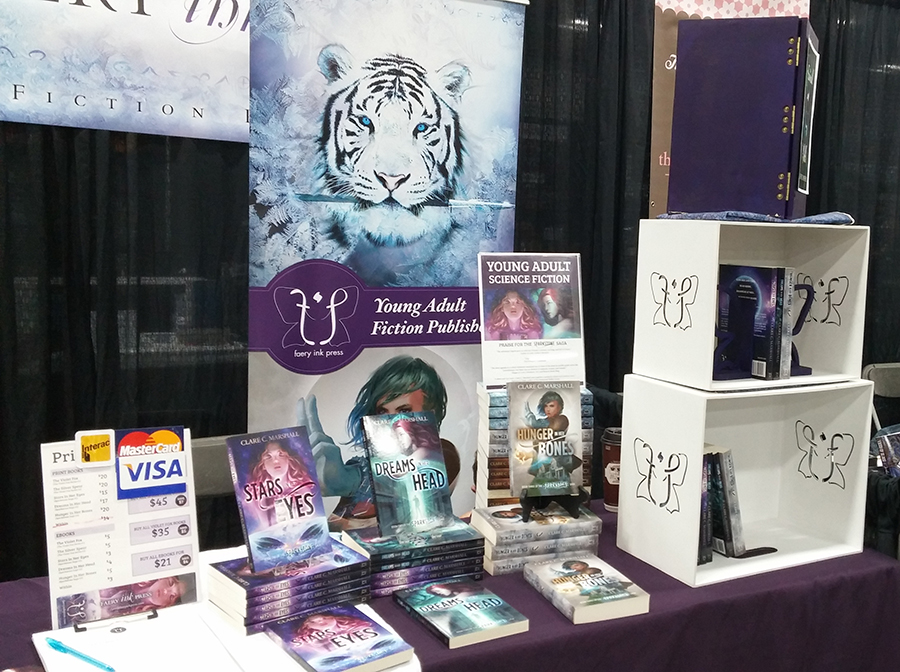 I had my boxies as usual and they certainly cut down on set-up time. Jessie has designed me a new display (see below!) and I can’t wait to use it. I like my boxes but they need a better paint job with different paint that doesn’t scuff. I’m still learning how to optimize them. I almost need another set to properly leverage the height.

I brought just enough stock to sell and use for display. By the end of Sunday, it was slim pickings! I only had three Violet Foxes left! I am going to have to reprint before my Christmas shows. Also, I was thankful to have bags this time, because the Expo didn’t provide the large welcome bags that they usually do. 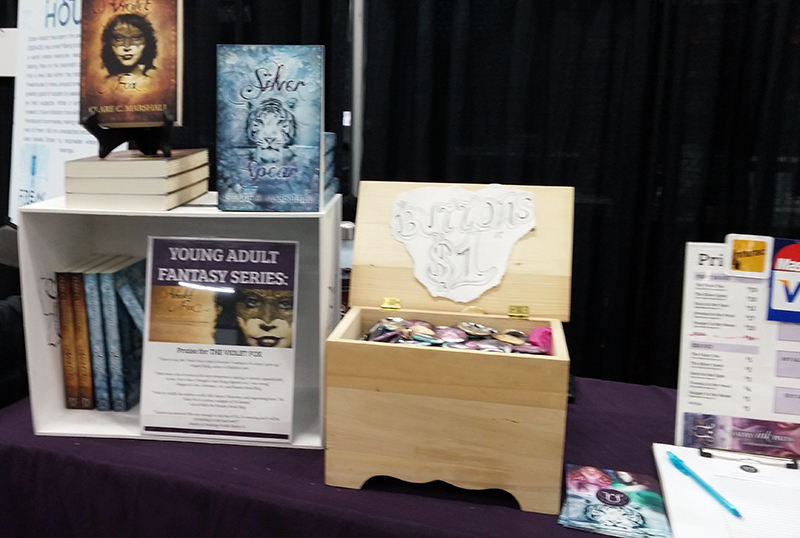 I had a 4% decrease from last year, so not super significant. I did well last year, and I’m pleased that I didn’t do significantly less given a) the other vendors mixed feelings about the show and b) my location at the end of the show. Most of my sales came around the lunch time hour as people (finally) made it to the end of the convention and grabbed food. On Saturday, I had a second rush during the last hour. Sunday was extremely brisk for most of the day, save the last two hours as people left the convention. This was a relief.

I’d say about 20-30% of my sales were from returning customers–people who bought my stuff last year and returned for something new. I would have had higher sales if I had The Emerald Cloth (cover reveal on October 13!) ready. It’s a reminder that if I’m going to continue to do both Calgary and Edmonton Expo, I need to have a spring and a fall release to capitalize on fans who attend both. Once again, during the quiet hours, I realized that my location–while important–may not matter if I continue to do the show. If I build that return customer base high enough, it may make up for any bad location. With table prices going up and up each year, I have to think long-term.

I will say that I’m glad I have two different series to promote–those who are waiting for The Emerald Cloth can read the Sparkstone Saga. I had equal sales of Stars In Her Eyes and The Violet Fox, but about twice as many bundle sales for The Violet Fox. I found that younger readers tended to prefer the Sparkstone Saga, while the adults who liked to read chose The Violet Fox. A large contribution to that decision is the snappiness of Sparkstone Saga’s back cover as well as the illustrations. Once again, the most picked-up book on the table was Hunger In Her Bones.

At this convention, I regretted my decision not to include Within on the table. I was between two other authors selling zombie/vampire apocalypse books and dystopian thrillers, so I lost some potential horror/thriller customers there. That 4% decrease? Probably would have made up for it with some copies of Within. Then again, it’s hard to have it on the table when nothing else is quite like it–at least for the time being. Sigh – maybe I should bring it back for the Christmas shows? I’ll think about it.

A lot more people than expected had cash, but it ended up being about 50/50 on the cash vs cards. Of those who used cards, slightly more than half opted for debit. This fits with the trend I noticed last year in Edmonton – everyone loves debit! So glad that I can accommodate people in that way.

I had a good chat with Suzy Vadori and Thea van Diepen, both of whom had booths in the rows behind me. I liked getting the chance to know Suzy better, and it was nice to see Thea back from her journey around the world–ready to create more books (yay!).

Matt from Pickering Woodworks also stopped by for a chat! For those keeping track, he was my neighbour at Calgary Expo this year. We talked shop for a while. It was really nice to see him again!

On Friday night, Greg, his friend Dave, and I went to see the new Kingsman movie. It was really fun! But I was so tired afterward. Greg and I had a nice chat. At this things, it’s hard to find the energy sometimes to have a long conversation–but we’ll have plenty of time for that when I’m in Winnipeg next month.

He also made an interesting point – that conventions like these, everyone is taking a hit because of the economy, oversaturation, etc – but if you are well branded, you can weather the storm. I think that’s true: that’s part of the reason I can make these shows worth my while. But I also believe in being flexible. I can’t do all shows every year, especially as I’m approaching ten books!

I hope to, if I get in! It appears that the Expo company (Calgary, Edmonton, Saskatoon) are no longer favouring previous vendors as much as they used to. We still get earlier registration, but it’s no guarantee that we’re in anymore.

I think this is a good place to note that while conventions are a cornerstone of my distribution and marketing efforts, I know that they won’t be profitable or worthwhile forever. It’s easy to think, “I’ll do Edmonton Expo until the END OF TIME,” but it’s just not realistic. Every year, the shows get more expensive to do, celebrity guests are harder to pin down, and the fans get oversaturated with content. This show works for me now, as long as I can continue to keep my expenses down and produce enough new work for my returning customers. In this business, you always have to look to the future. 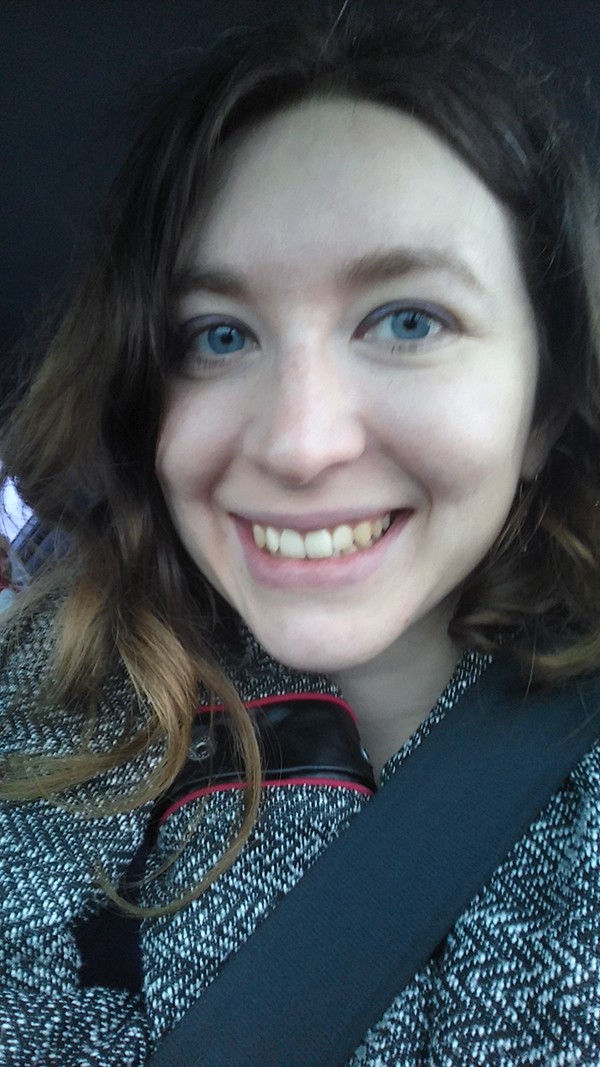 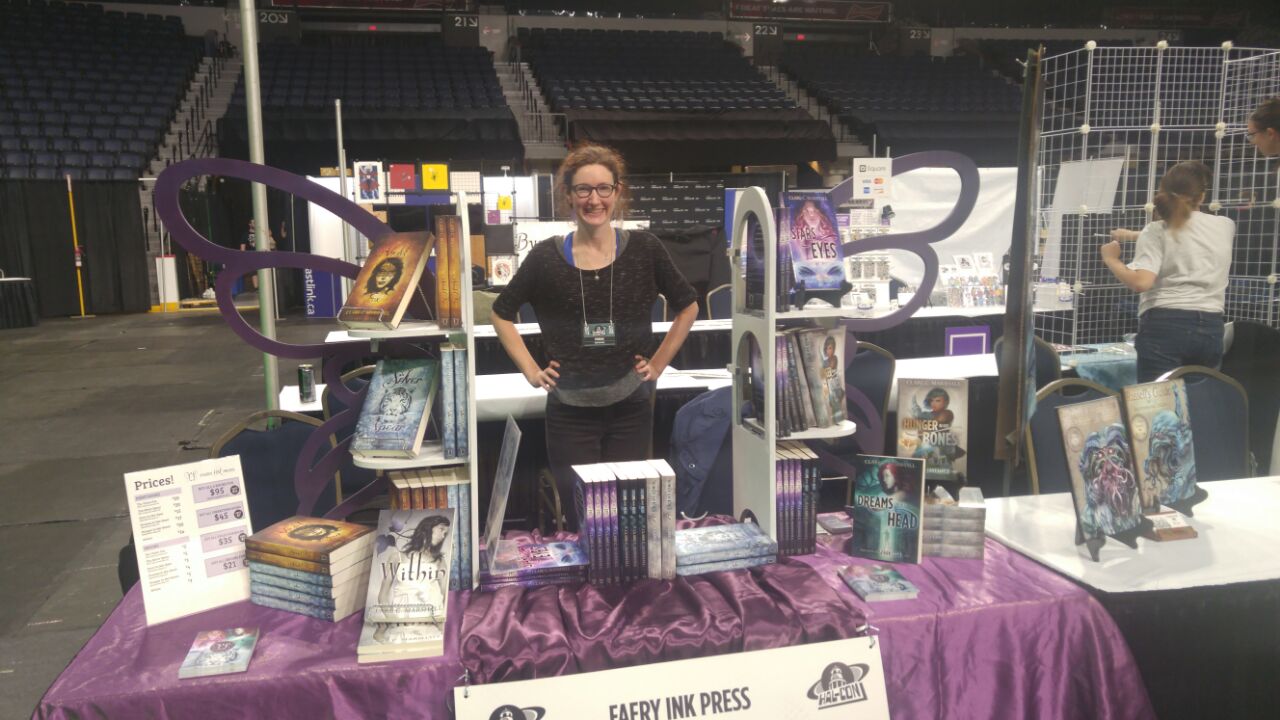 Hal-Con 2017 was the SAME weekend as Edmonton, so instead of saying, which one should I do, I said, why not both? So I sent my sister to my regular “home” show. She did very well! Thank you to everyone who helped her out and stopped by to chat with her! 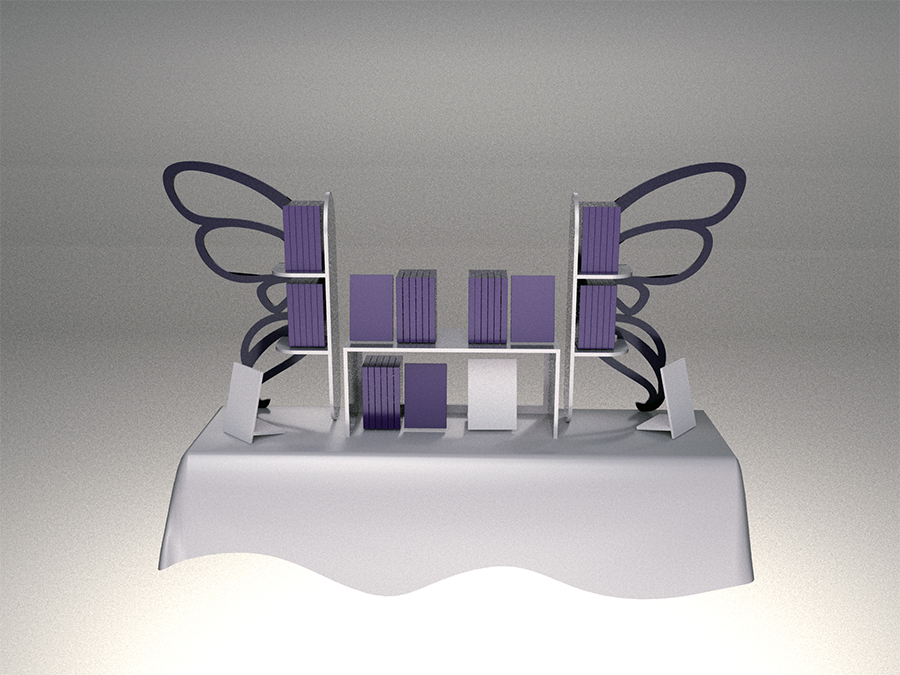 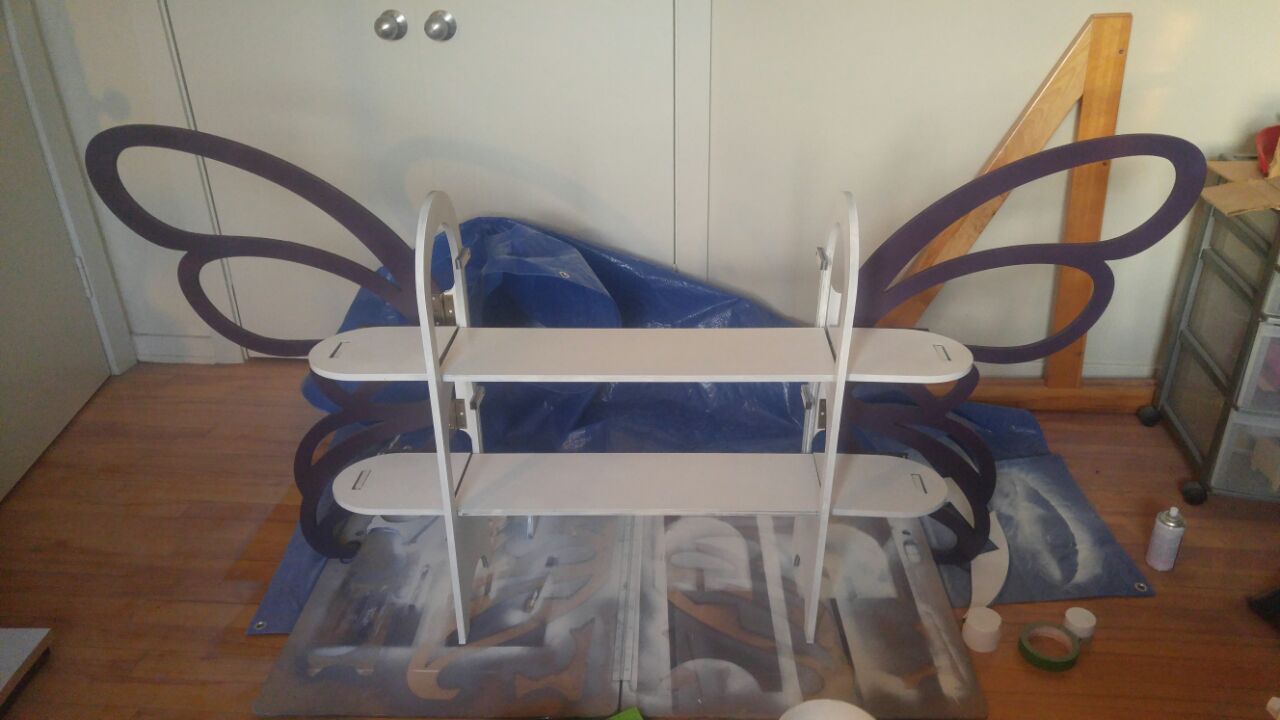 Also, she unveiled new display 2.0! Yes, she designed AND made it. Laser cutting, pew pew pew. It folds up, packs flat, and fits in a large art portfolio case. The shelves are removable. I’ll probably do without the top part because I’m shorter (gotta be able to see my pretty face!). I can also use it in conjunction with my boxes to create unique displays depending on the show and the space. It’ll look really nice on a white tablecloth too!