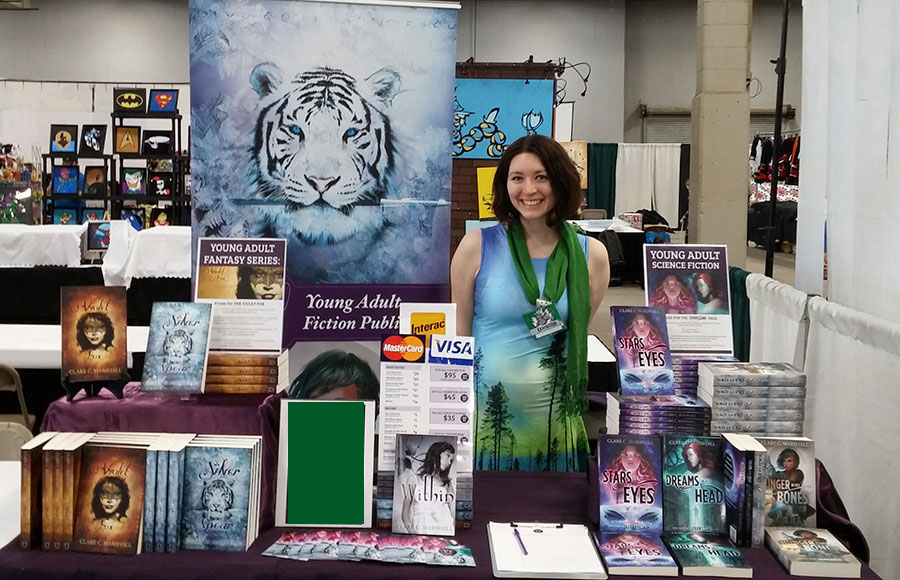 Two down, one to go. Why did I think doing three cons in a row was a good idea? Oh yes. Good for business is why.

I am writing this on my flight from Regina to Ottawa, sleep deprived and sniffly from my cold. I’ll be staying in Ottawa for a week until Ottawa Comic Con. I am a little sad to leave Regina – I’d just gotten used to the flat, dusty, warm climate.

This whole journey required me to do some mental gymnastics when it came to organization. Originally I was going to go to Prince George’s Northern Fan Con but Fan Expo Regina worked out better for my three-con hop extravaganza. Unfortunately, I didn’t find out that I had a table until a month before! That is almost no time. The communication between the vendors and the expo seemed to be extremely disorganized.

I took the Greyhound from Calgary to Regina. They only offer overnight trips, from 11:30pm to 9:30am. Dirt cheap, compared to flying and the cost of luggage. That meant I had to go on a Thursday night instead of a Friday, as getting into Regina at 9:30am Saturday would be too late for setup for this two-day con. I can sleep on a bus, I thought. After all, who the hell wants to go to REGINA on a Thursday night?

Well, turns out, an entire bus load of people. It was jam packed, the air conditioning was on full blast, and I could barely get two hours. Not good for me and my cold. Got some nice pictures of the sunrise at 5AM though. 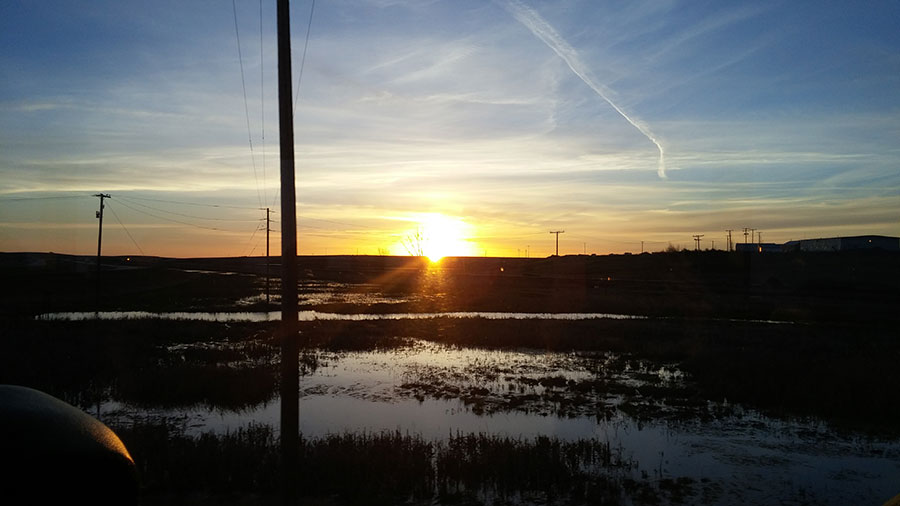 When I arrived, it was relatively easy to get a cab to my AirBnB—a room in a woman’s house very close to Evraz Place in the Cathedral District. I was a bit early so I dropped my bags and got some breakfast at a local fair trade/vegetarian/vegan coffee shop. It was very tasty. The Cathedral District is an older part of Regina near downtown, similar to Kensington in Calgary but smaller. I’m so glad I stayed there, it was very conveniently located, cheap, and nice overall.

So I took Friday to relax and recover for the two hectic days to come.

On Saturday morning, I got up early, got a cab to the convention centre, and set up. This was straightforward. I packed my display into two suitcases, plus I had my shiny new banner. I always worry when I’m travelling about whether I bring enough. I rationed and counted out my stock this time, bringing exactly what I expected to sell plus a tad extra to pad out the display. Once I had it set up on my 6ft artist alley table, it actually didn’t look too bad. 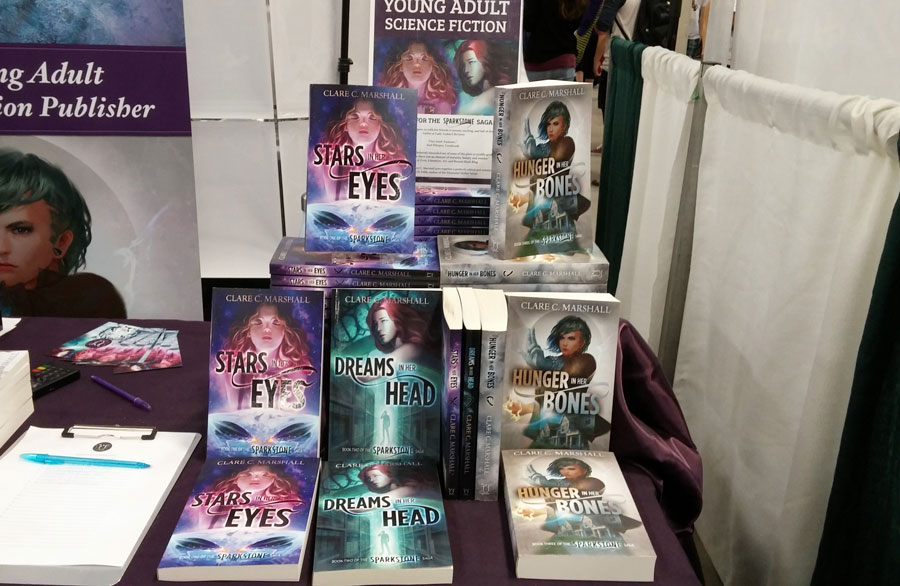 After Calgary Expo and figuring out how to display in 10×10, I really appreciated the smaller space more this time. There is something to be said for space restrictions fuelling creativity. I returned to my U-shape: putting the Violet Fox Series on one side, and the Sparkstone Saga on the other, elevated to eye level. Within went in the middle next to the newsletter signup.

In general, I was surprised at how TALL the vendors built their displays for this con, even in artist alley. Large towers of prints everywhere you look. In the exhibitor/merchandise area, everyone seemed to have ceiling-hanging banners. In the rules, there were guidelines about height restrictions but those didn’t seem to be enforced here.

I was in artist alley. I actually liked the set up of the con. It’s not a huge show, and very navigable. The artist alley was several rows long near the back of the centre but it received a lot of traffic. I was the first table off the main drag, so my tiger banner was visible and drew people in. Good ol’ tiger.

This was a two-day con. It’s sometimes hard to say which day will be the better sales day. Generally Saturday is the best. It seemed to vary from artist to artist that I talked to.

Saturday was boiling hot. Regina was having very good weather: 27, 28 degrees the entire weekend. Unfortunately, for some reason the convention centre doesn’t know how to anticipate weather and they didn’t turn on the air conditioning for Saturday. This resulted in a lot of unhappy customers and vendors. In fact, the last few hours of the con were pretty dead as a result.

Surprisingly, I had a good Saturday, but a terrible Sunday. I had a lot of interest on the Sunday, but not a lot of bites. I didn’t end up doing any promotions—no first day sales. This is the first time in a while that I’ve forgone them. But I was a) eager to recoup my costs of the trip and b) had limited stock. Maybe if I had done a sale on Sunday I would have seen a bump in sales. Even with my debit and credit options, people seemed extremely hesitant to part with their money, preferring to buy later. I had a lot of people ask me if I’m in Chapters. I need to get better distro through there. 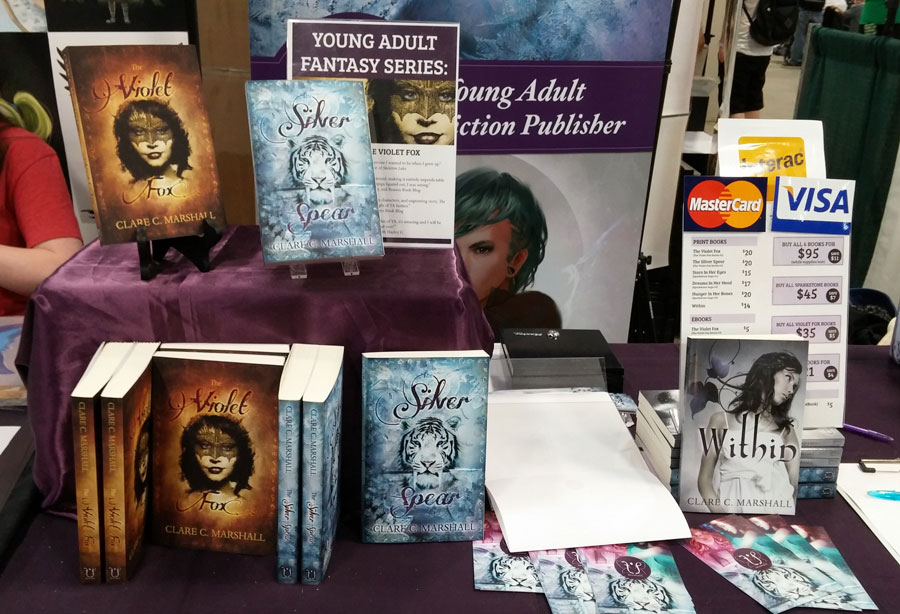 At the end, I was left with only 2 copies of The Violet Fox left and 4 copies of The Silver Spear, so my careful packing paid off. I sold almost as many Violet Fox bundles (first and second books together) as I did single Violet Foxes, so that tells me that my pricing here is good. In the picture above, you can see how few copies I have left! I also put the Emerald Cloth picture down so I can have a proper cover reveal later 🙂

I didn’t bring so much stock that it would be a nuisance to pack up and take to Ottawa, but I didn’t take too little so I wouldn’t create a demand that would be difficult to fill later (shipping costs for single books are too high). While people seemed mostly drawn to the Violet Fox Series because of the tiger cover, I did sell a number of Stars In Her Eyes and a couple of Sparkstone Saga bundles. I was hoping to sell more Sparkstone Saga bundles – I could afford to drop the price a bit there to make that more enticing. I might do that this weekend for Ottawa.

I didn’t sell many eBooks – I also didn’t bring my sign promoting them. I made a makeshift one later on Saturday and that’s when I got some nibbles.

I also didn’t take buttons with me on this trip. They are not worth their weight.

My Moneris reader had some weird errors on Sunday, so I’m going to have to look into that. In general, I found it a bit stressful in the morning, making sure it was properly tethered to my phone. I found I had to have the Bluetooth turned on BEFORE I open the Moneris app.

Overall, I did slightly better than Saskatoon Expo, sales-wise, which was my goal. The table was twice as expensive and I had to pay for accommodations (which I didn’t have to in Saskatoon).

I did not realize how dusty Regina is. It wasn’t just the convention floors. Outside, a car would go by and kick up enough dust to get in your eyes and mouth. That was hell on the contacts. At night, the wind would howl mercilessly. That, plus the heat…is Regina secretly Tattooine? Even on my books, there was a thin layer of grit. Not unpleasant, sort of like a matte coating, but still. How?! 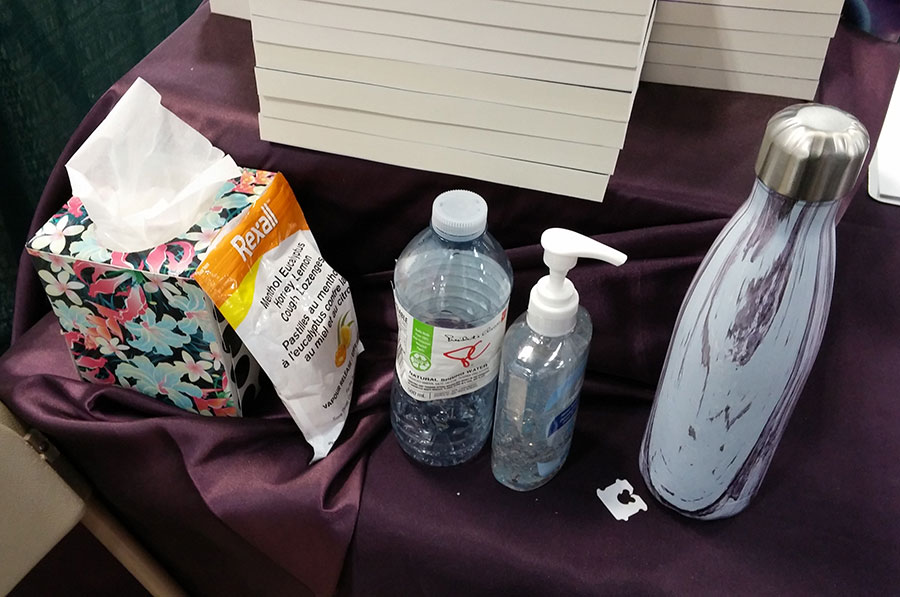 This didn’t help my cold. I had a whole station with tissues, hand sanitizer, cough drops, cold medication, and water to keep me going in this desert climate.

The whole weekend was a whirlwind so I didn’t get a lot of social time but I did end up going to see Guardians of the Galaxy with Greg. That was fun! And the movie theatre had recliner seats! Such luxury!

I had a nice chat with Nyco Rudolph, who is launching is book, When Bears Invade. Hopefully we get a chance to have a beer the next time I’m in Winnipeg or at another show.

While Regina is a new audience for me, I had a couple of people either a) say they’ve heard of me before b) return for more books because they saw me at Calgary Expo c) had fans/friends of fans approach and buy physical copies of eBooks they’d bought online. So that was cool! I feel my ten-show-a-year strategy is starting to pay off.

I also had a few people express interest in publishing, and doing trade shows with their books. I really enjoy talking about what I do (it’s the main reason why I write these post mortems), but a healthy reality check is required before jumping into an aggressive schedule like mine. Trade shows are expensive. Travelling is expensive. Lugging heavy product around the country is EXTREMELY expensive. Eating healthy while on the go is also tricky, especially if you have food allergies like me. And if you can’t keep your costs down, you’d better price accordingly—and have a product that you can price accordingly. Remember to take ALL of your expenses into account, not just the table cost, when choosing a show. You need an attractive product and a defined brand. For bigger shows like Calgary Expo, you can’t expect to break even by only selling $10 items (food probably being the exception). Undervaluing your art is the first step to failure. And, I think this should go without saying, but I’ll say it anyway: are you a super nerd that loves dropping hundreds of dollars on autographs and merch? Being a seller is going to be difficult for you! Turning around and spending your sales money at the con may bring you short term happiness but you may find yourself unable to grow your business.

Regina did okay by me, but I see where I can make improvements. I see now that I need to shift my mindset for smaller shows. I only blame myself when I don’t sell well—there’s no point in blaming the potential customers. You can’t blame someone for not buying. It’s not their job to like your product. It’s your job to make your product inviting, and be inviting yourself, so that the barrier to purchase is so low that they’re throwing money at you.

Maybe! I made enough to consider it. I applied for guest status but I didn’t get it, but in a sense, I’m glad because they seemed to stick a lot of featured artists out in the cafeteria, away from the main vendors and artist alley. WHY? That sounds like business hell to me.

I’m not sure of the final count on attendance – but it felt slightly larger than Saskatoon. Last year’s numbers say 15,000 or so, but certainly not more than 20,000 came this year. When it was busy, it was packed.

I’m getting to the point where I’m going to have to have a vehicle to drive to these cons, if I want to lower my expenses and keep doing them. I’m also getting the sense that I don’t have to do every show each year to stay relevant, despite my go-go-go drive to do All The Things. I also hate only focussing on Western cons because I have an audience in the East that I’d love to capitalize on. Regina is close enough that I could throw it in the rotation each year, despite its apparent internal issues.

Well, time for a week of work and rest/recovery – then Ottawa Comic Con!