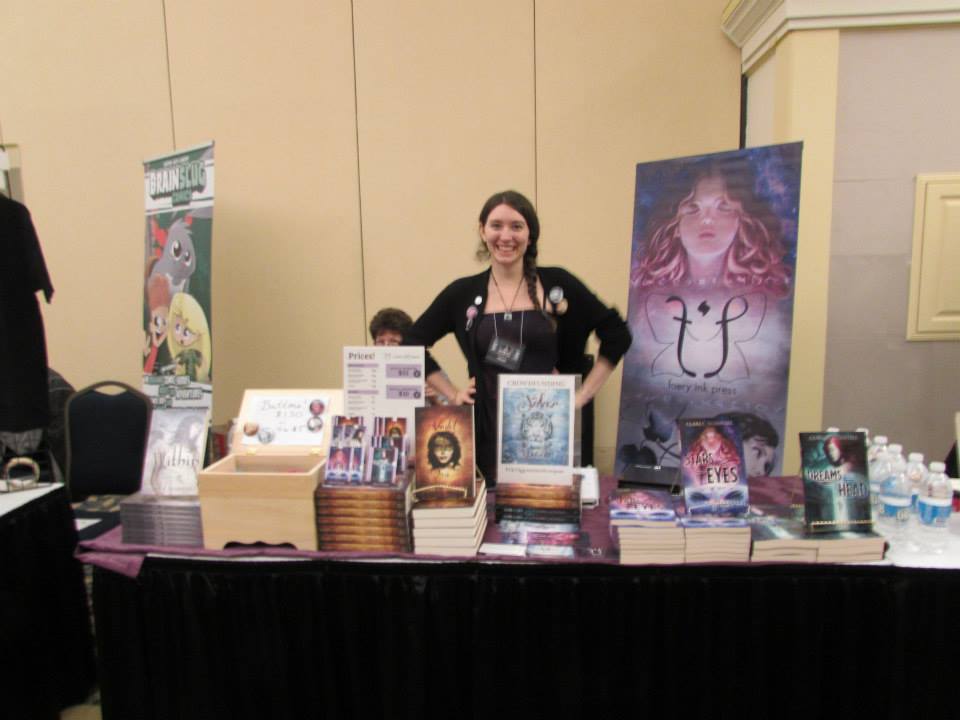 With every con I learn something new. Often lots of things. I always come back rejuvenated. It’s not easy to keep the same level of discipline about a creative work, but going to conventions really makes me feel like what I’m doing matters. So THANK YOU to everyone who visited my table, bought my books, and/or just chatted with me. YAY.

I have done similar wrap-ups to other conventions I have attended. Reading them in order gives you an idea of my “evolution” as a publisher, but of course not necessary.

Overall, I didn’t sell as much as I thought I would. Talking to other vendors on the floor, they expressed the same feelings. Even though the con was sold out (thousands of people), it seemed like I saw a lot of the same people wandering around the floor. I was on the second floor this year as opposed to the first floor–the first floor was mainly filled with game merchandise and the big booths. It was jam packed down there. Also, this year they didn’t have a free floor that was open to the public.

I had a decent amount of people who said they would buy my stuff from my website. I hope that they follow through! Unlike last year, I didn’t sell out of anything. My sales for The Violet Fox, Dreams In Her Head, and Stars In Her Eyes were all the same, with no clear stand-out–all did equally well! But I was left with only a handful of copies of Dreams In Her Head. I realize now that I should bring more of my newest book because that’s what returning customers wanted–what was new! Like last year, I had people overpaying for things deliberately, a sort of “tipping the artist” act which is very thoughtful and considerate. 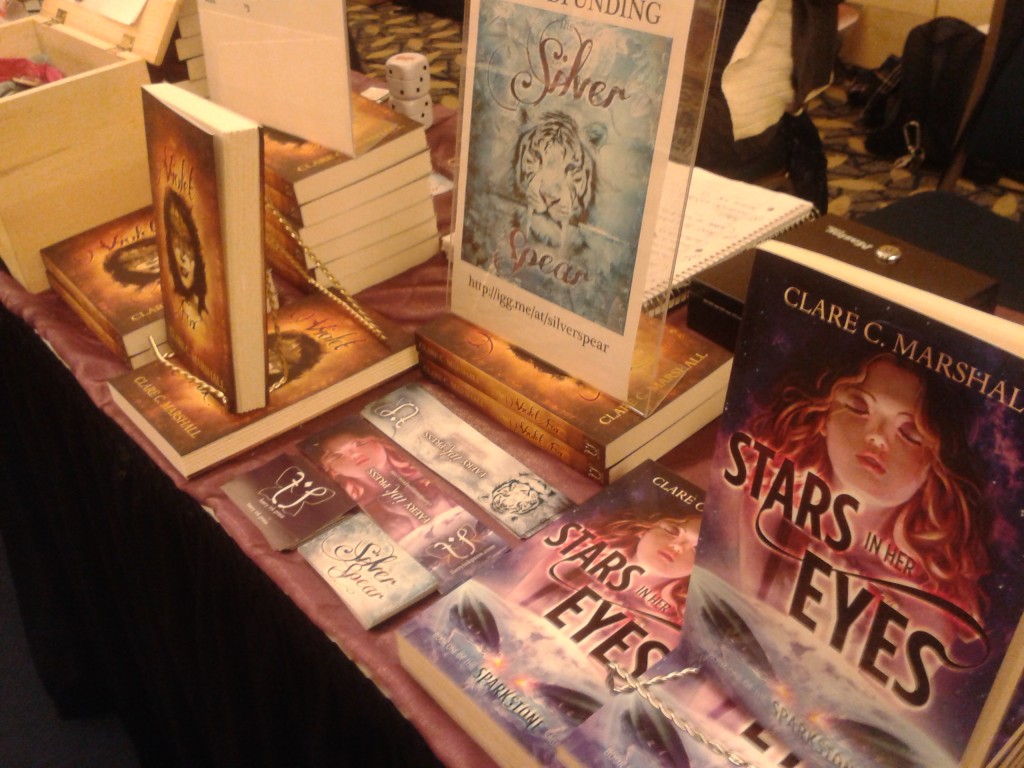 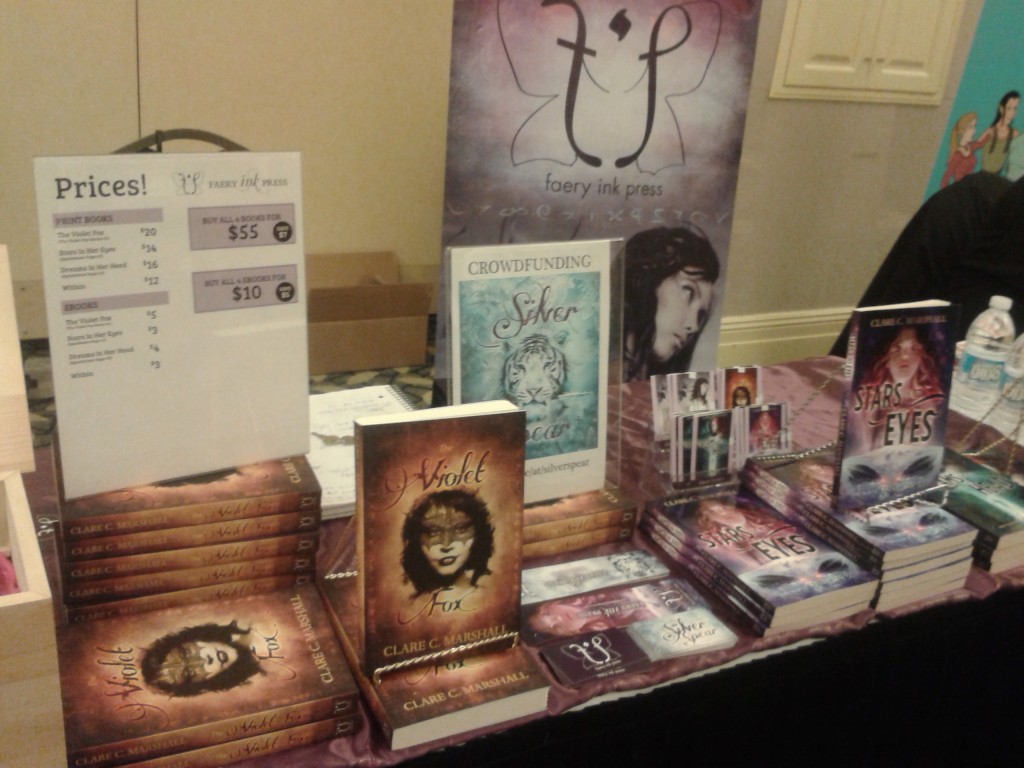 I really liked my display this year. Putting more books on the table, taking more time to consider how I wanted to stack them, it made me feel a lot more like a publisher than an author, which is really what I strive to convey. I had two different kinds of bookmarks, eBook cards, business cards, Silver Spear promo cards, and my buttons.

My books attract a lot of browsers. Even people casually walking by would slow down–especially for Stars In Her Eyes. Having the banner was a plus. People immediately take me extremely seriously. Not that I would expect any differently, but you teach people how you want to be treated. You don’t want people to think, “oh, that’s just another author hawking her wares.” You do want to make an impression. You should create an experience.

The question I still get asked the most is “Is all this one series?” I tried to separate the Sparkstone books and the Violet Fox stuff by putting swag and buttons between them, but that didn’t seem to matter. As I grow, I’ll have to make more signs and more of a separation between everything. Of course, even though I have signs, people will still ask questions, so there’s only so much I can really do here.

As I publish more books, I realize that I’ll have to become even more creative with my display. My series books are taking up more space. Eventually I’d like to have a really cool display that involves bookshelves, but transporting something like that would be a pain. And expensive. Adding an additional table is also costly. So we’ll have to see as we go! I’d love to also have one or two people dressed up as fairies or something and walk around the con, spreading the word. Or maybe some Violet Fox cosplaying? Again, all future stuff. 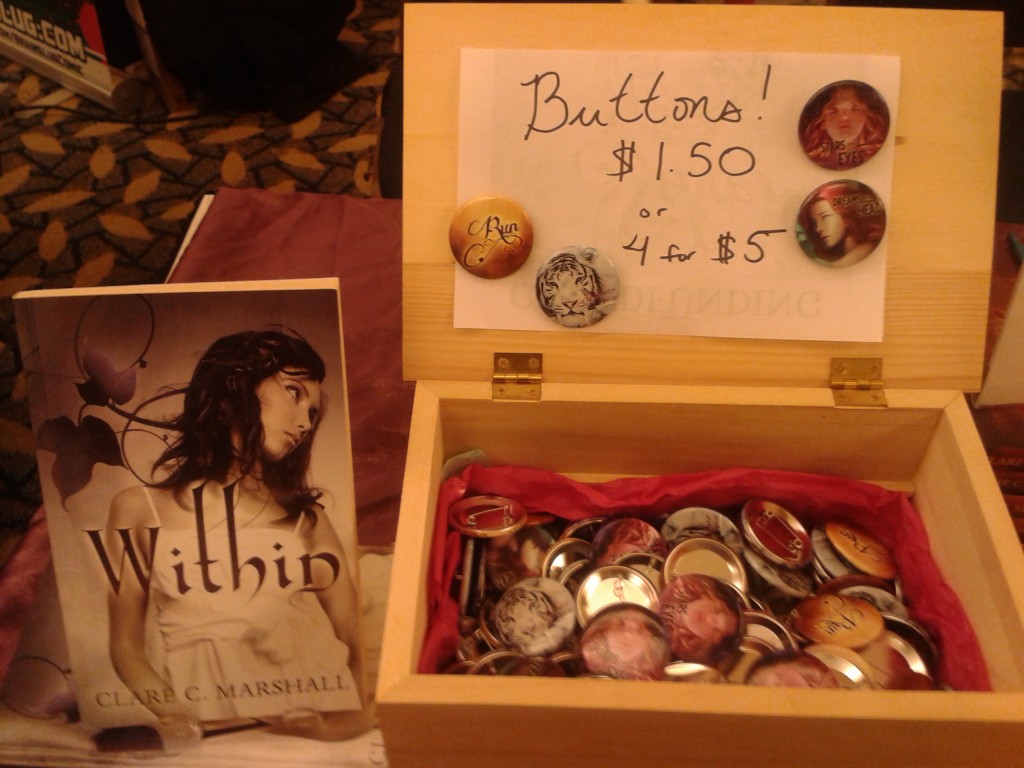 Because I noticed a lot of people gunning for the buttons last year on other tables, I decided to make some of my own! I had them made by Six Cent Press in Vancouver, and they were great to deal with, so I totally recommend them.

Admittedly I didn’t sell as many as I thought I would. The “RUN” button was really popular though, I think because it’s fairly generic–even if you’re not familiar with The Violet Fox, you can still buy and enjoy the button. So I may make more generic ones in the future. But still, people really enjoyed seeing them, and stopped at my table because of them, even if they didn’t buy anything.

People really just want to take those. I’ve got to get a glass display and only put out samples to prevent people from taking them. I don’t think anyone successfully took them, but I had to be really watchful 100% of the time whenever anyone picked them up, because almost all the time they thought they were info cards about the book. Info cards aren’t a bad idea actually, and a number of people expressed that they wanted something book-specific to take away so that they could remember the information, so they could buy it later at their convenience. But having eBook cards AND book info cards seems excessive and might confuse people even more. So I’m not sure how I’m going to move forward with that. Maybe if I have a rack of FREE SWAG things (bookmarks, business cards, etc) and then had the eBooks on the opposite side of the table?

In any case, I only sold maybe $30 worth of eBooks. They’re nice to have, everyone thinks they’re cute, I think they’re cute, and they’re good for people who don’t have enough cash to buy the print books or prefer reading digitally but still want to support the artist.

So FINALLY I fixed my banner. It worked great. I went to Staples and bought their banner stuff, removed the old plastic stuff holding mine together, reattached everything, and voila, a banner was re-born. I even kept it up in the apartment for 5 days just to make sure it wasn’t going to fall down.

So, it worked great…for the first 2 days. On Sunday when we came in in the morning, it was crumpled in a corner. It hadn’t just fallen over–it looked like someone had knocked it down and shoved the pieces in the corner. I immediately notified the Hal-Con staff and they were really professional with me and great–they checked with security for any incident reports, and the cleaning staff. Turns out, when the cleaning people were shampooing the floor, they knocked it over with their machine, and then must have put it in the corner. It really bummed me out that they didn’t at least leave a note or something. It must have been some machine, it pretty much knocked all the metal bits off. All of it is reattachable and the banner itself was fine, but it’s a headache. For the rest of the day, I couldn’t get it to work properly. I need time to properly put it back together so that it won’t fall on people. SIGH.

Next time I buy a banner–a few years down the read–definitely getting a roll-up one. No question. They’re more expensive but the cheap banner has already caused me enough grief. Might as well pay for the nice stuff and save myself the headache.

Do you only take cash?

I didn’t get my Square stuff set up in time, so I only took cash. I maybe only lost 3 sales because of this. However, being on the second floor instead of the first floor probably affected this aspect of sales. As soon as you come in, the first floor is the place to go for browsing merchandise. A lot of money is dropped there. By the time you get to the second floor, you could be out of cash and only have plastic. So next year, I will be on top of this.

Peter’s Launch & Some Other Thoughts 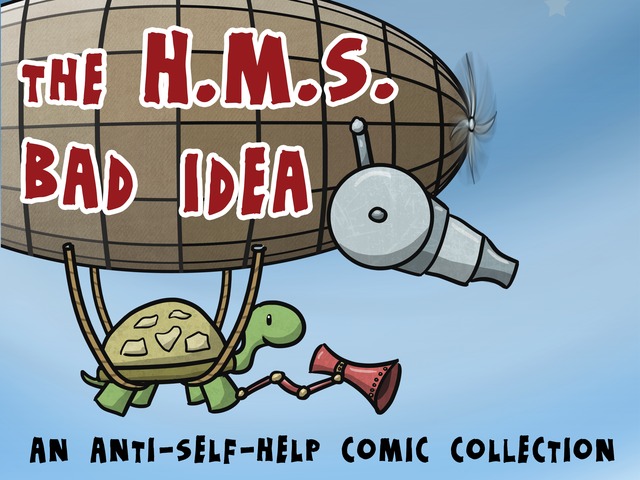 I actually went out and did stuff this time! Peter Chiykowski (whose name I have to copy-paste every time so I don’t misspell it!) of Rock, Paper, Cynic fame is a friend of mine from King’s and he’s doing all kinds of cool stuff all the time. His book launch for H.M.S. Bad Idea was probably the best book launch I’ve ever been to. Book launches usually they involve a reading, some mingling, some food nomming, and book signing–they’re hard to make interesting unless you’re already a fan of the work. Doubly hard for comic books–how do you read from that?

Peter livened it up with music. He writes his comedic songs and performs them effortlessly. What a great way to tie different mediums together. He also made the event interactive: he encouraged people to write their own funny “bad ideas” on sticky notes, and place them in a large album, and share them. Peter is naturally charismatic and has a way of making everyone feel like they are part of the experience. The entire room had a down-to-earth feel, and everything that happened felt congruent with the Rock, Paper, Cynic brand. Basically, Peter is really successful because he has found a way to sell not just books and comics, but HIMSELF, and he can reflect himself in everything he does.

Making your stuff interactive is a great way to make your work accessible–this is something he said on the crowdfunding panel (which I also attended). That switched on a light in my head. It made me think about how I could increase that in what I do. Making books accessible isn’t as easy as making comics accessible. Comics have a big visual element: you can pretty much tell right away whether or not you’ll like them. Books, you can like the cover but not the words. Or vice-versa. I think I could definitely do a better job at making myself more accessible (and just doing more online things in general!).

Also, I should fold more of my talents into one thing as well. I’m always hesitant to show off my music because the fiddle can be loud and obnoxious and not as accessible as a guitar, but seeing how successful Peter made his event with his music, I am inspired to do the same with my next event. Music is actually a big part of the Sparkstone series. I have written a song to go along with The Silver Spear, and once I figure out a way to produce it (in a way that is high quality), I will definitely add this element to my presentations & share it around the interwebs.

Hal-Con has a great atmosphere for all types of artists. My table was next to BrainSlug, created by Andre-Guy Landry in Moncton–who was super nice and we chatted throughout the weekend. Also chatted with Adam Sigrist, who is an author of the fantasy “Hero”, available on Wattpad. Lots of great independent creators who are getting their stuff out there.

It was also nice to see old friends drop by to catch up. Managed to do a little catching up with Kat C. Healy of All Grown Up Books, my old roommate from Humber. It was like we had never parted. And of course, all my other school friends, it was fun to see them enjoying and partaking in the con too.

Of course! It’s a long way to go for me now because I live out west, but Nova Scotia is my home. I really hope it doesn’t conflict with C4 next year because I’m ready to give that con another try.