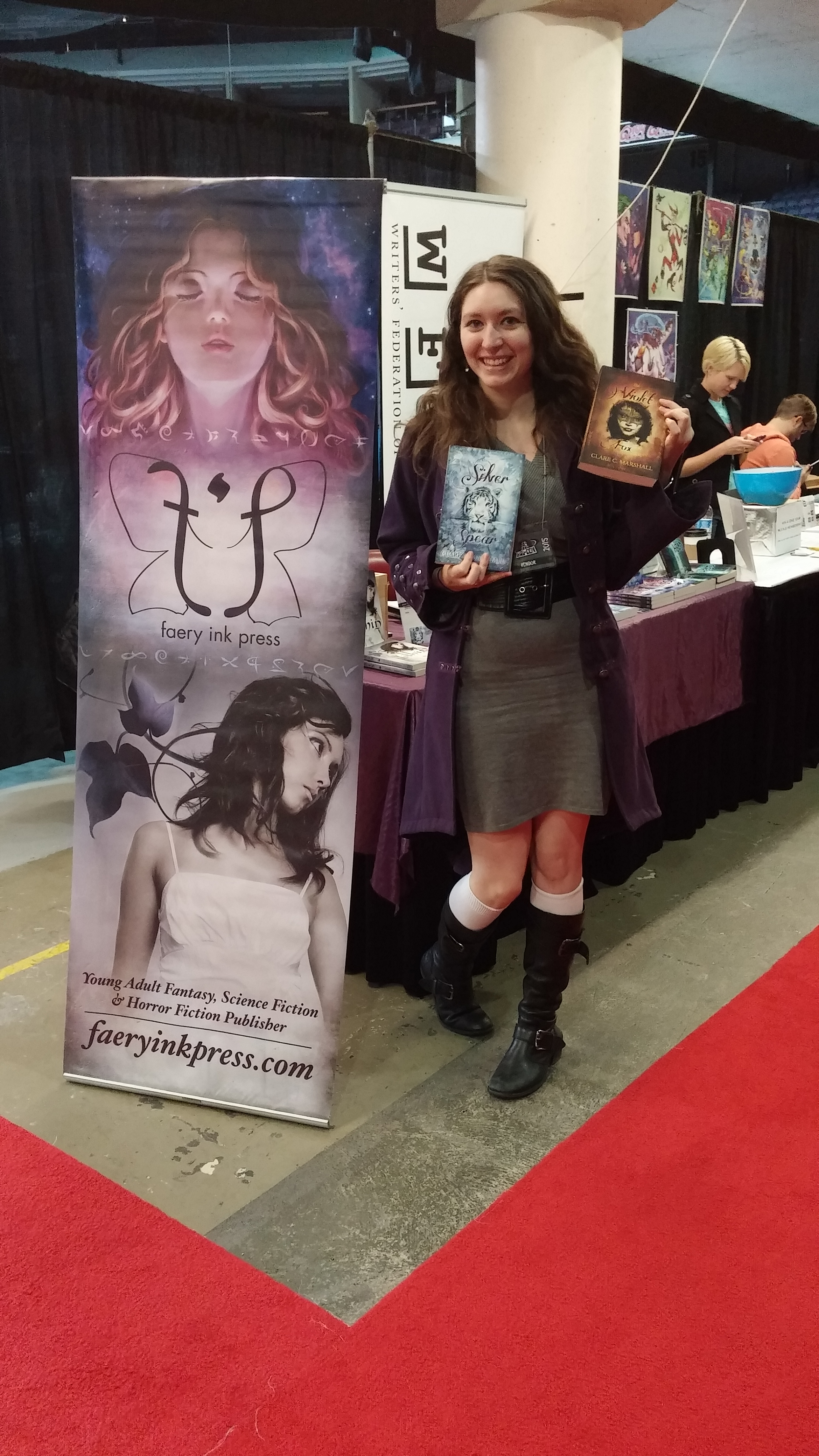 Hal-Con is over!! No more conventions this year for me. But, lots next year (I hope! 🙂 ) I had a lot of fun this year, I sold lots, and everything is good. Special thanks to Jessie and my dad for helping me out at the table! ^^ And to all of you who stopped by to say hi, THANK YOU TOO!

So, this Hal-Con was GREAT. Finally, they put all the vendors on one floor, in the big arena area. My table was right on the red carpet that marked the main thoroughfare, and even though I was at the back of the convention, I was on a corner and across from the main artist guests of the con. So, I had a good amount of traffic, extra space, and lots of opportunities for people to see me. And location, as I’ve discovered, makes or breaks your con success.

The convention centre is a complete maze–they’re supposedly building a new one somewhere–but move in was fairly painless (lots of volunteers to direct you). I wish the vendor hours were shorter. I did most of my sales earlier in the day, and by the end of Sunday, people were packing up an hour and a half early because all the attendees had cleared out. I was exhausted at the end. I even had moments where I wondered what city I was in. After a while, the cons blend together a bit. Though I will say, where last year it seemed like I was seeing the same people over and over again, this year I felt like I saw new people all the time. I think their attendance went up by about 2,000, making about 8,000 attendees? I await the final count. Still, it’s the largest con in Atlantic Canada.

This is the first con where I had FIVE BOOKS!! FINALLY. Everyone fit nicely on the table, only had to move the button box backwards.

I had great neighbours–the Writers Fed of Nova Scotia. I never realized how many young people worked there. They were really great, very committed to educating and meeting writers and authors of all kinds. Unfortunately, because of a giant pillar, there was limited space for them to place their banner, and it ended up sort of on my side. Normally I wouldn’t mind, but with the banner so close, a lot of people mistook me as part of the Writer’s Federation. Nope, I’m my own thing! Couldn’t really be helped, and it’s not like I had a big back banner to better identify myself. My tall banner was working the corner LIKE A CHAMP. I have ordered a large horizontal banner now, and will premiere that at Calgary Expo 2016.

My poor banner. It’s still holding up, but got lopsided by Sunday. I took it down every night to avoid what happened last year. 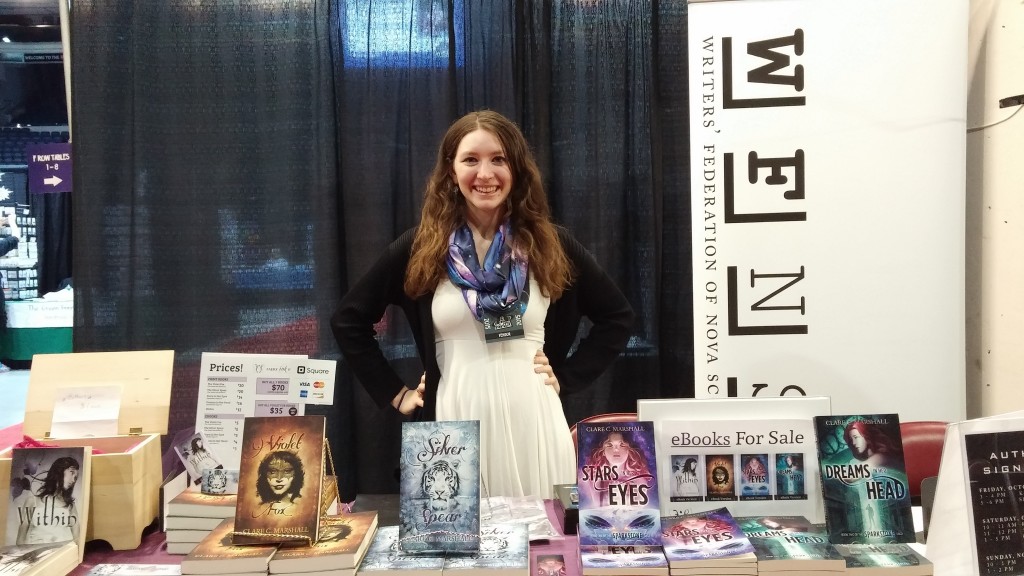 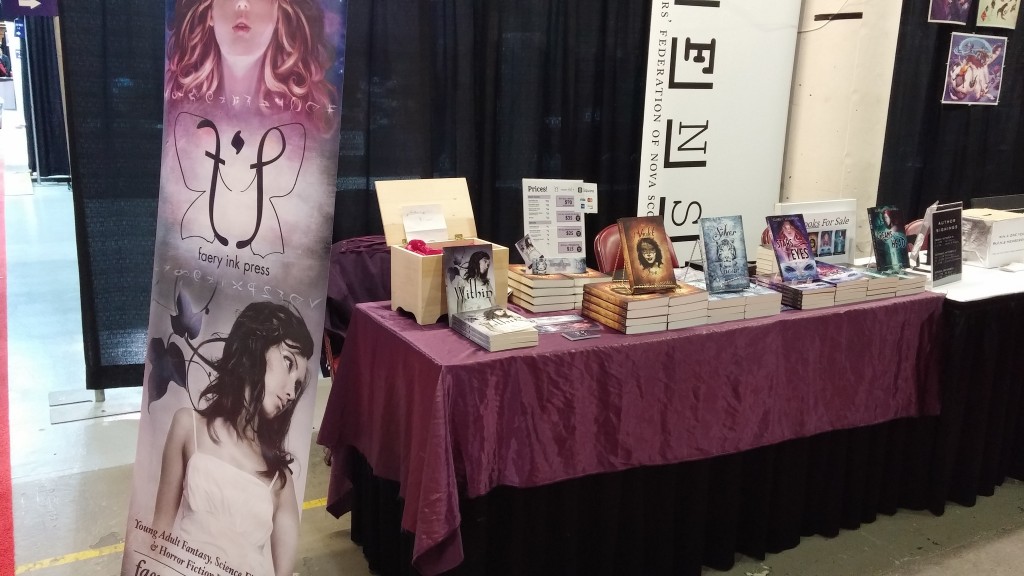 Related to my display: I had a lot of success with standing up, and wearing my purple coat. I think that’s because it’s noticeable, and when I’m standing, I’m at eye level. Always a good thing to do when possible, but good here, as I didn’t have any front-facing banners immediately attracting customers. My FACE was a suitable substitute.

I think I may be onto something with the eye-level thing. It feels so weird that the table is so low, making the books low. Might be a worthy experiment–make something that my books can sit on that’s close to eye level, so they are immediately apparent to the passersby. Like a mini shelf that’s tall and not too heavy. NEXT TIME?!

I did very well at Hal-Con. Halifax is good for me, mostly because I’m from Nova Scotia, and 80% of the vendors are from Atlantic Canada. People come to this con to buy, and they buy local.

I completely sold out of Within. I’ve started bringing less copies of it to cons, but in hindsight, I should have brought more to Hal-Con since the book is set in Halifax. It’s also one that catches people’s eye. If they’re not picking up The Silver Spear or The Violet Fox, they’re picking up Within. Stars In Her Eyes is also eye-catching for its colouring, but mostly to anime fans. I won’t be reprinting Within until closer to Calgary Expo 2016, which is my first con of the new year.

By the end of Sunday, I only had one copy of The Silver Spear left. I probably could have sold it, but then I get home and I realize that someone has laid claim to it. So! Yes! Out of The Silver Spear too. I was good at calculating just how many I’d need to last me to the end of Hal-Con, but other than the copies out west in bookstores, I am totally out! So I’m looking into solutions for larger runs (but not too large), since I’ll definitely be needing those for next year as well.

Because I now have 2 books in 2 different series, I have started offering bundle prices at my table, which was a great success. People expressed that they wanted to ensure they could get the sequels, and the best way was to just buy them right then and there. So that’s something I’ll continue doing as I put out more books.

I sold more buttons this time, because I lowered the price. I only sold a few eBooks–almost all my sales were print books. People only bought the eBook if the print book wasn’t available, or if they’d bought the eBooks from me last year and wanted to continue their tradition.

I can take credit cards now!!

Yes. YES! One phone upgrade, now it’s super fast, and it doesn’t take a million hours to load a little credit card app. Twelve percent of my business was in credit cards, which is not too shabby considering the actual dollar amount. The Square app was very easy to use, no problems at all! Though if you do have the signature setting on, it’s a bit difficult for people wearing gloves as part of their cosplay who can’t easily take them off. Also, as I found out, it doesn’t take Visa debit. Ah well. About 3 people asked me if I did debit, but were understanding when I said that I did not. Maybe in the future, if I have cons every month!

I really like talking to people who are similar to me, who make their art their business–like Peter Chiykowski, who continues to grow and be amazing at innovating and driving people to his projects, and Adam Sigrist, a new friend of mine who has just launched his Kickstarter for a graphic novel project. I also took some time to wander around and visit the other artists to see what they’re up to. I’d love to do a collaboration someday. SOMEDAY. I also enjoyed meeting local Nova Scotian authors, and talking about what works for them.

I’ve had a lot of people tell me in the past few weeks that they’re impressed with what I’m doing. It’s nice to hear, especially since some days I feel like I’m spinning my wheels. I’ve mentioned this before, but I work alone in a basement, so when I come out of my dark space and into society and I realize that there are people who are actually paying attention to the stuff I post, it’s gratifying. It was really nice to spend time around other creative people and not be stuck in a basement. Again, I’m reminded of how forward-facing I am; that I don’t often get a chance to look back at all I have done, which happens when I explain to others what I do.

I really want to. Now that I’m based in Calgary, it’s expensive for me to just come for one con, even when I do well. I’m looking into applying for guest status and hoping that alleviates some of that cost. Overall, I found it to be well run, secure, and everyone is just the friendliest. I have quite a few returning customers who buy whatever I have that’s new, and I want to continue to be there for them. Also, it’s just a fun con that continues to grow. I can’t wait until it’s in the new centre. Probably not next year, but who knows?