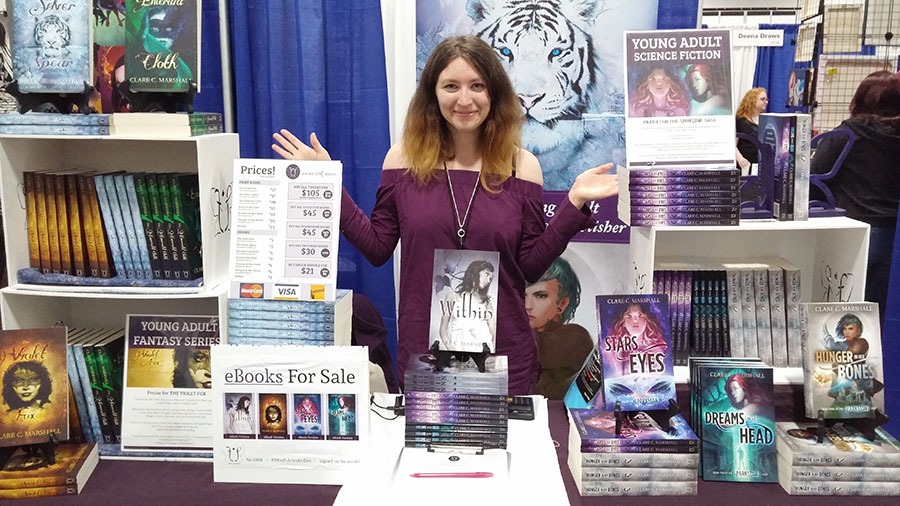 Once again, I squeezed all my client work into about ten days before departing for Ottawa. I’ve never been busier. I am really looking forward to some down time in June (if that happens – who knows!). I’m juggling a lot of balls right now. On top of that, the con crud got to me. I think I’ve been resisting it since Calgary Expo. Doing a lot of cons in close proximity really takes a toll on your health. So right now, I’m just plowing through work and organizing everything for Anime North. It never, ever stops.

My second time in Ottawa! And overall, a much less stressful visit, compared to last year. I got off the plane, made my way to the EY Centre, dropped off my heavy bags and picked up my badges, did a partial set-up, and then ubered to my cousin’s place. We had a nice Thai dinner and caught up, and then I settled in with my two new best friends, this sibling duo known as Gower & Bip. 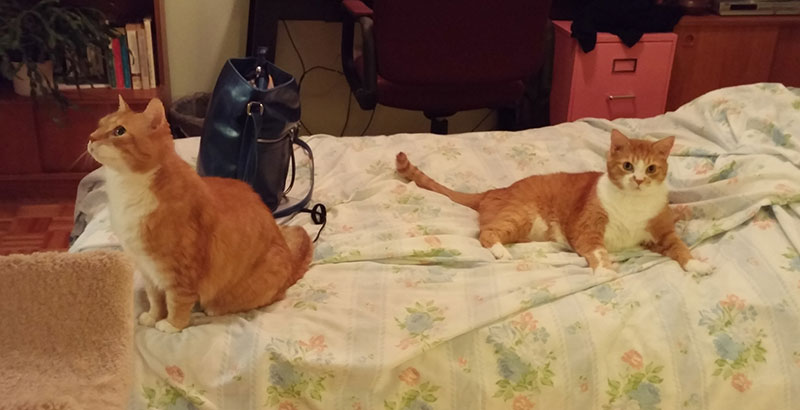 Unfortunately I was not here just to see kitties, I was here to sell books, which I did very well, with my cousins’ help! YAY! 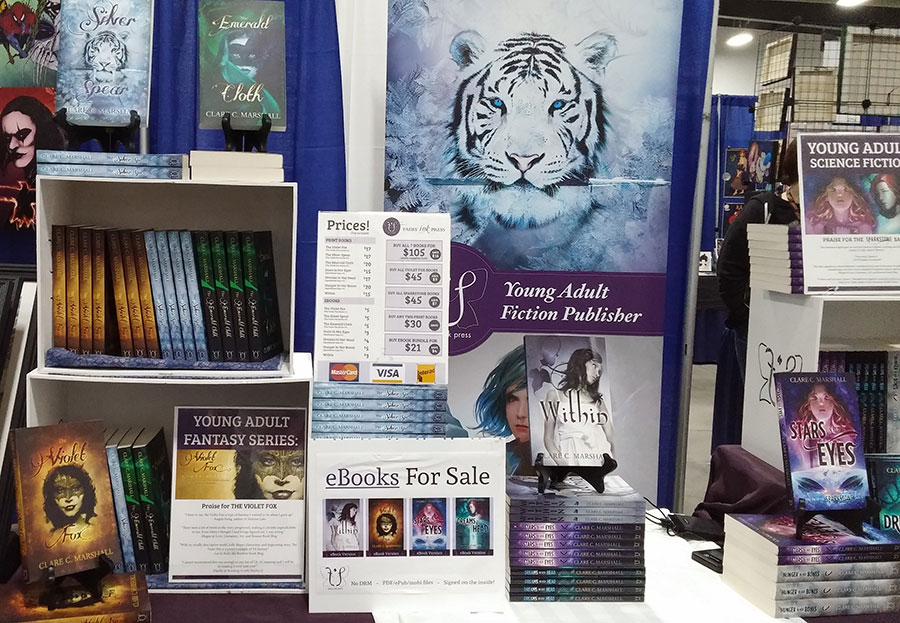 Nothing ground-breaking here, but I am filling the shelves, just like I did at Calgary Expo, which creates an attractive look. Putting the eBook sign front and centre helps make those sweet, sweet bundle sales. 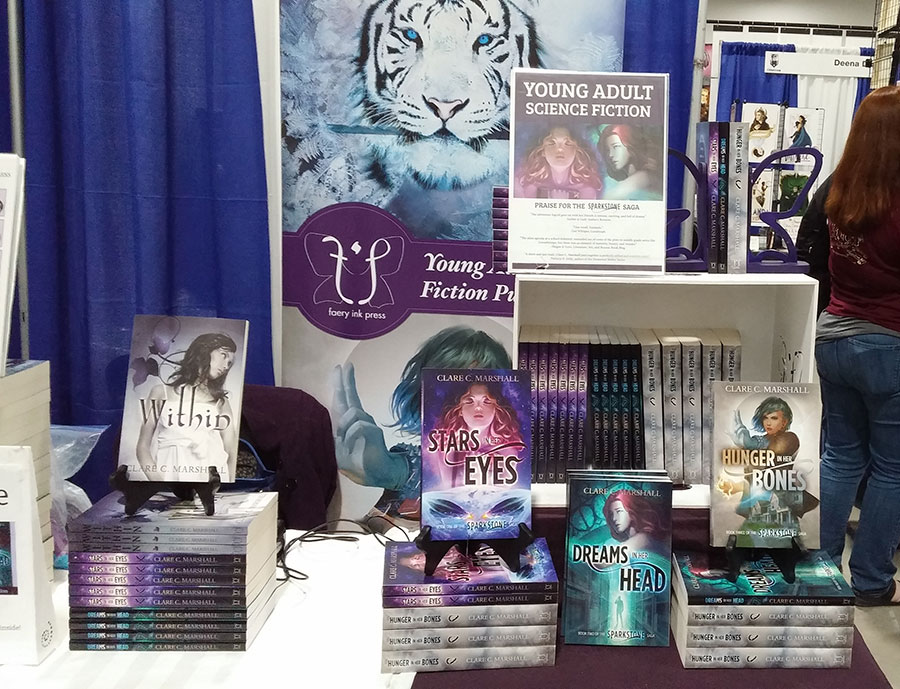 My new postcard catalogues arrived in Calgary the day after I arrived in Ottawa, so I wisely packed business cards for my takeaways. This worked fine—I didn’t display them, but gave them to those who asked. I’m looking forward to having my pretty postcards on the table again next week!

Friday was steady, Saturday was extremely busy, and Sunday was about double Friday.Stars In Her Eyes had more individual, one-off sales. I found that readers who spend less than 10 minutes at my table, who were just looking for a new book to read, and weren’t necessarily my target audience, chose Stars In Her Eyes as an entry point to my catalogue, just because it looked or sounded interesting enough.

I also had more people returning, asking for Darkness In Her Reach! I know, I know, I’m working on it! SOON?!

The Violet Fox sold some individually, but mostly in my Any 2 for $30 bundle. This works as a great upsell across the board—for those wishing to try both book ones, for people picking up the sequels, and for those just wishing to sample my offerings. I also had more people than usual willing to pay the All for 7 price ($105).

I employed a relaxed sales strategy—engaging those who did the double take, luring the shy onlookers in with a no-pressure invitation to browse, and conversing with the attendees with my natural friendly attitude.

Moneris reader still going strong! I’m wondering what its lifespan is—I hope it doesn’t conk out during a show, knock on wood!

So Ottawa had a new system this year. Each badge was individually barcoded, and each time you entered and exited the building, you were scanned.

Now, this system seems fine in theory—it allows them to account for vendor whereabouts in case of emergency. But in practice—it’s hard to enforce. Not every staff member was diligent about scanning me in or out during the day. One who caught me coming back in, scanned me, realized I hadn’t scanned out, just shrugged his shoulders. One person told my cousin, who’d went out for five minutes and wanted back in without previously being scanned, that “next time” she’d better hunt down a staff member if there wasn’t one near the exit if she wanted in and out.

I don’t mind cons making rules that enforce safety or improve the show. But it’s not our jump to hunt down staff members when they’re not there or not doing their jobs. We have to get back to our table so we can do our jobs. So if you have a system, it has to be enforced evenly across the board—or not at all.

Stock Prep and Selling Out 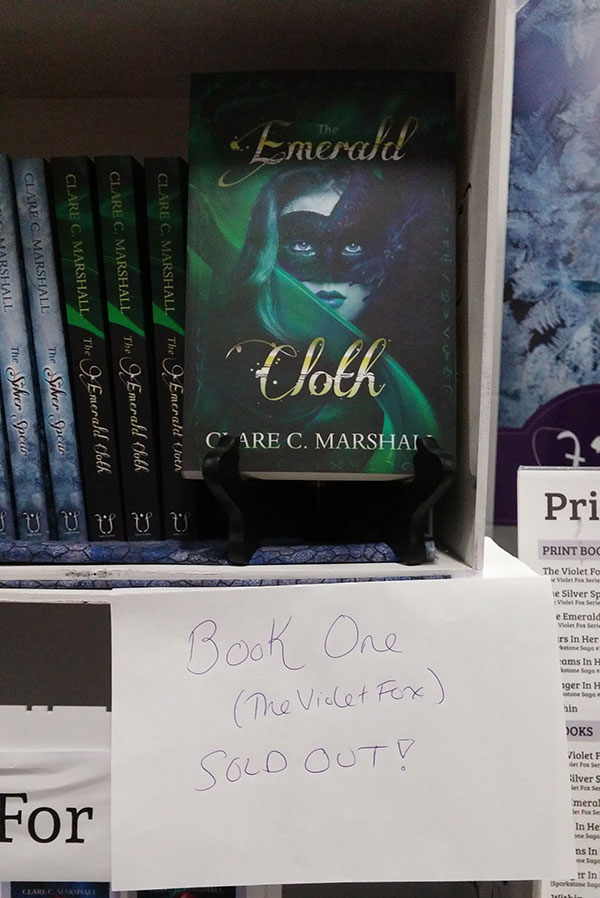 I shipped a couple of boxes ahead to my cousins (which arrived a day before the event – phew!) and then loaded up my suitcases with the rest (it’s cheaper to check 50lb bags on the airplane than it is to send 50lbs through Canada Post).

I carefully considered my stock for this show. Generally, I go back through my spreadsheet to the previous year’s show, and pack that amount, plus extra, depending on new releases and even how I did at a show two weeks to a month prior. A good rule of thumb is previous year’s stock plus 20% extra – you have to fill the table, after all.

I ended up selling out of The Violet Fox and I was down to two copies of Stars In Her Eyes. Within also sold out by Sunday, but I only brought five copies of that. Most people bought that in one of my bundle deals.

I was overly optimistic that people would buy more series bundles, so that’s why my selection was fairly balanced – instead, I should have brought far more book ones. Granted, I didn’t sell out until Sunday afternoon, so that’s not as bad as selling out on Saturday! But I probably lost out on at least $50 by not having enough copies of The Violet Fox. No joke, a woman returned to the table, ready to buy The Violet Fox, and the very last copy rested in the hands of a guy who had approached three minutes before, ready to buy right there and then. Sorry!

So, now I know for Anime North – send way more book ones!

It’s a guessing game, but you take the guessing out of it little by little by keeping track of your sales and looking for trends. Risk is the name of the game, too. Do I spend an extra $30 in shipping to send an extra box there, just in case? It might contain an extra $350 in books, but what if I don’t even make the $900 I’ve already spent making this happen? Often with shows, because you’re paying all this money up front, months in advance (sometimes weeks), you feel like you’re bleeding out. But then the shows come, and you get bandaged up and injected with adrenaline, and you feel more powerful than before. Then of course, the cycle starts again.

On top of that, there’s also your product display to consider. The more you sell, the less you have on your table, and then less appealing the display to the customer. Granted, this isn’t always the case. I was astonished at my mail-order sales in Ottawa last year. I had six books, a tablecloth, and a smile.

Then with shows like Ottawa, or anything where I’m travelling, the question is not only, how do I make a profit here, but how do I grow the show each year? As I’ve discussed with Justin Currie and Greg Chomichuk before, it takes a couple of years to gauge the show – three years, is the number we’ve settled on. Three years of data will give you enough to work with. Of course, this is assuming you have new things each year and you’re upgrading your brand and display accordingly. Three years is enough to gauge what your return customer rate is. Doing a show and thinking “that wasn’t worth my time” isn’t constructive – you have to ask yourself, “what did I do wrong, and how can I improve for next year?” That’s the only way you can get more data, discover the problem (be it your display, your products, your brand) and fix it.

I made more than I did the previous year, but the previous year I had special circumstances. So while this is the second year I’ve done it, it’s sort of like the first year. I did about what I expected to do, perhaps a little less, but only because I expected more bundle sales than single-book sales.

I’m starting to tangibly see the effects of continuing to show up. I had a number of people returning for sequels. I have people telling me they’ve heard of me.

Also, I’ve done three shows this year—soon to be four—and I’ve already sold 40% of what I did last year. I am due for a serious look at my numbers and a rethink on my print runs because just a month ago I was drowning in boxes, and now I’m back to just regular piles. My decision to only to big shows seems to be paying off. The bigger the risk, the bigger the reward.

I was neighbours with Jailbird Comics, run by Dustin, who moonlights as a comic artist and has an original comic called H.E.L.L. about a jail for demons. It was so nice to chat with him during the down time!

On my other side, there was Celeste, who makes INCREDIBLE MASKS. It attracted a lot of attention over the weekend, and she even let me try on the elephant! LOOK HOW PRETTY!! 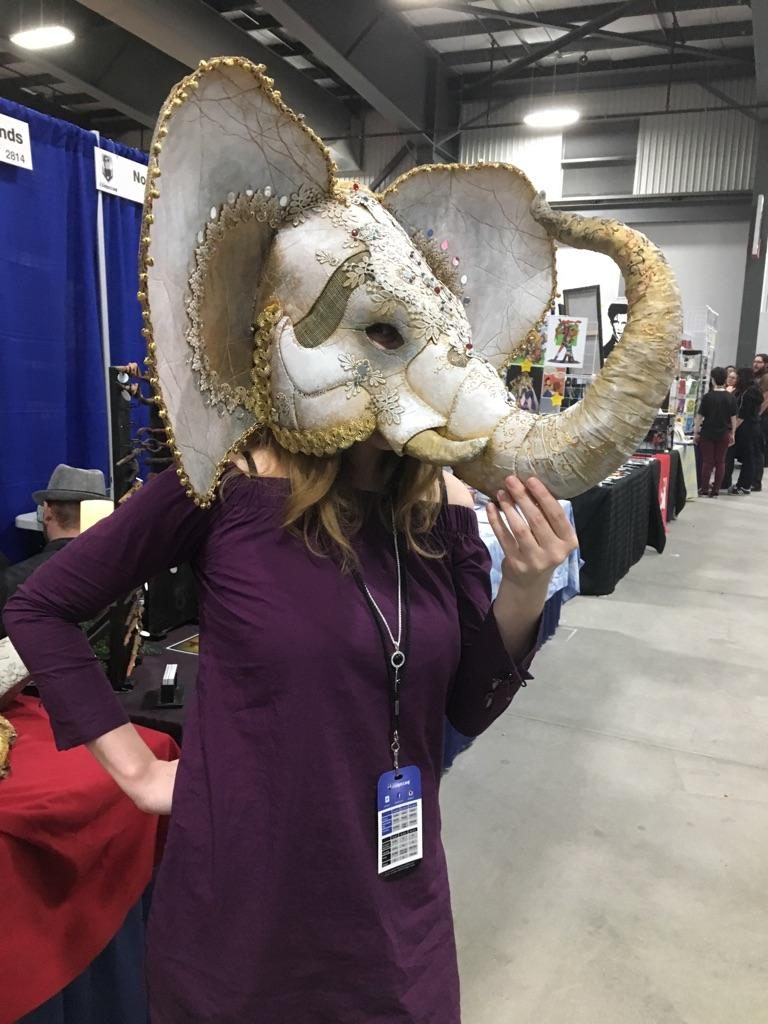 Thank you everyone who stopped and chatted with me! 🙂

I had such a fun time hanging out with my two cousins, Jennifer and Kathleen! They helped me SO MUCH over the weekend—giving me a place to stay, kitties to cuddle, driving me to and from the event, getting me coffees and Booster Juices, and generally keeping me company! They also got to enjoy the con for three days, went to panels and Q&As, and made some very good jewellery purchases. Thank you so much for all your help!!!! ^_^ 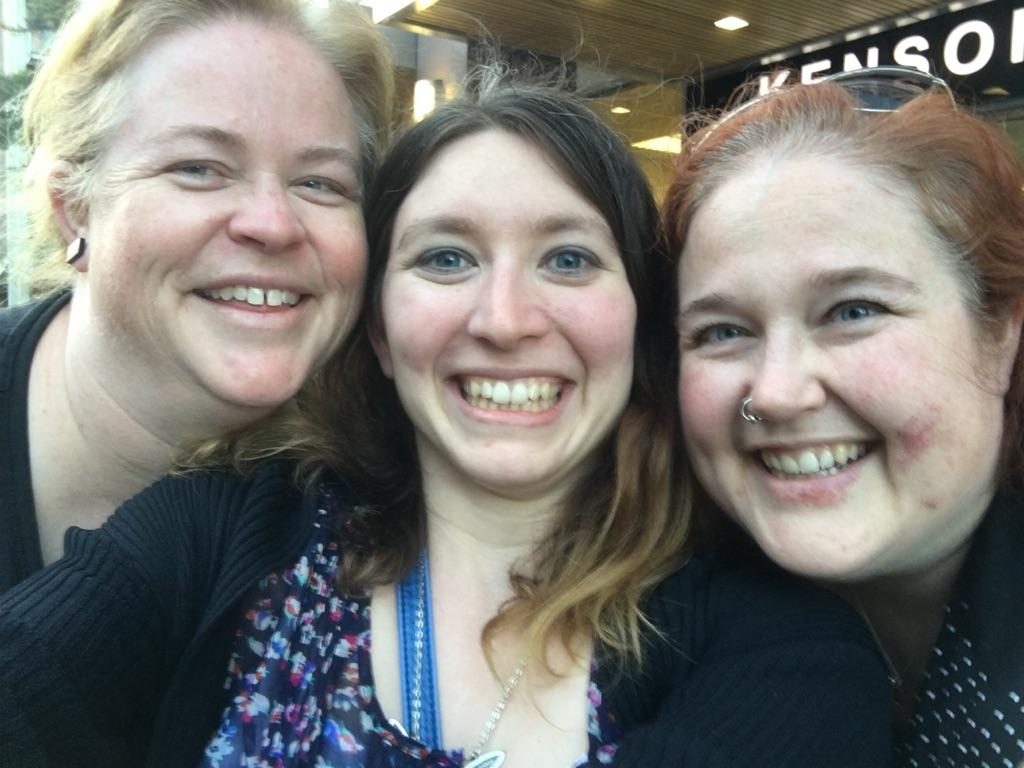 Yes, I’m giving Ottawa a third year – then I will have three years of data to judge what to do going forward. I’d really like to continue having a presence here. Also, I like visiting my cousins! And the kitties, obviously.

See you next week at Anime North in Toronto!! Then, a month of well-earned “rest.” Aka, back to regularly scheduled freelance work and hopefully some writing.
Time to sleep with the kitties!! 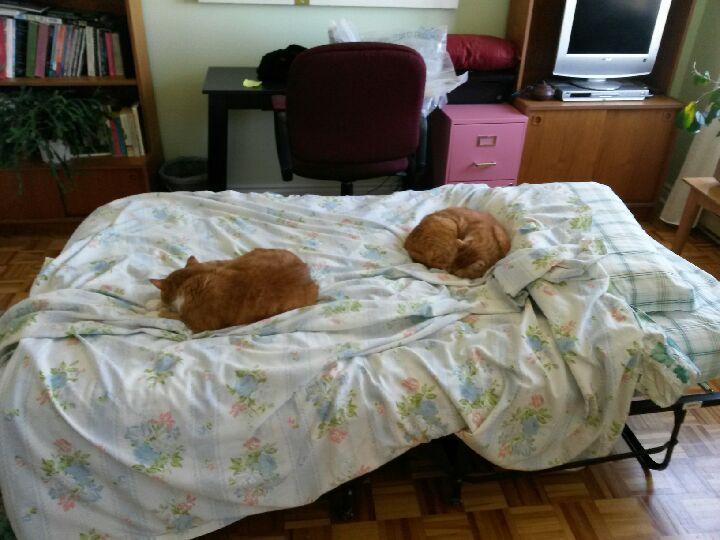