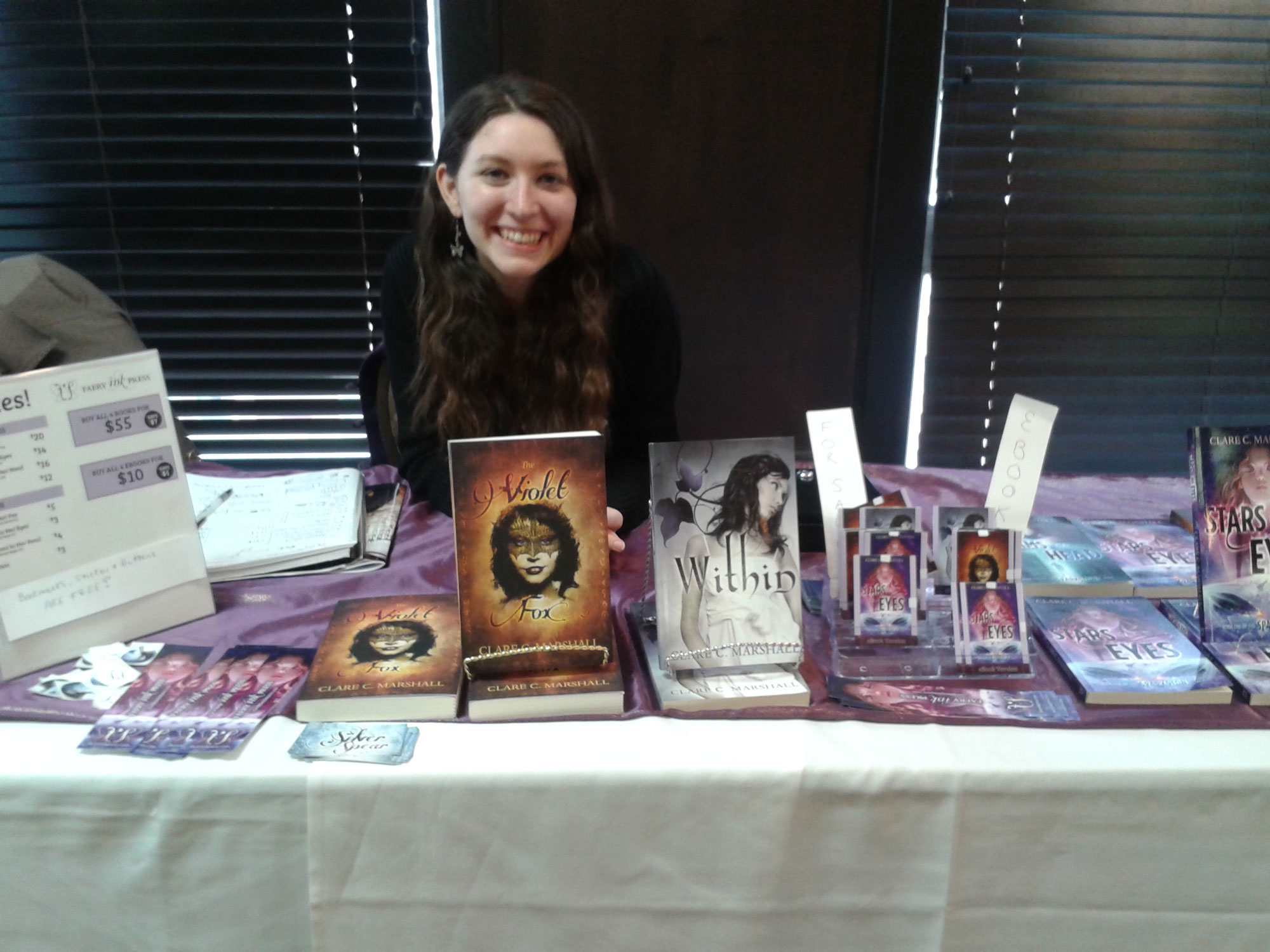 It’s time again for my con wrap-up posts! This is my second time at Keycon in Winnipeg. For those unfamiliar with my previous Things I Learned posts, see my posts for Hal-Con, C4-Con, When Words Collide, and my first Keycon.

Last year’s Keycon was a big deal because it was the 30th anniversary of the con. There were about 700-800 people there, according to some of the people I talked to. This year, barely 500. The great thing about Keycon is that people there actually do buy books. I made slightly more sales at Keycon than I did at C4 Con. But I didn’t do as well at this year’s Keycon. Last year had bigger guests with wider appeal, and that coupled with a non-anniversary year probably lead to a lower attendance.

I did, however, have several people remember me–and several people asking for the Violet Fox‘s sequel, The Silver Spear–which won’t be out until next year at least (more about that in another blog post). I did have people buying Dreams In Her Head because they bought Stars In Her Eyes last year, so that was nice.

Booth Set-Up and Other Logistics

Same venue as last year and same dealer’s room. There seemed to be more dealers this year and the tables were crammed together. This was problematic because to get out from behind the table, you had to disturb other vendors and walk behind their exhibits OR crawl underneath your table. So that was a little annoying.

Sam and I shared at table. Her book, The Lake and the Library, has been nominated for an Aurora this year, very exciting!! So while she did panels I helped sell her fantastic book to the masses. In exchange, I slept on her couch. She’s a good friend and is very hospitable, and she also works in the publishing industry and does freelance like me–we have a lot in common so it’s nice to visit with her!

We were next to Scott A. Ford, graphic novelist extraordinaire! He writes, illustrates, colours, and publishes his own graphic novels. His work looked very professional, and he’s just graduated university with a graphic design degree, and already he was nominated for a Manitoba Book Award. He got a lot of interest, especially Sunday morning, and I had a really great time chatting with him about publishing and the different con experiences we’ve had. One interesting thing he said was at cons like C4, it’s hard to not get discouraged by the sea of fan art. Promoting an original work in a place where people mostly want show merchandise is challenging but he seems to be doing really well, so POWER TO HIM!!

Random pics from my table!! 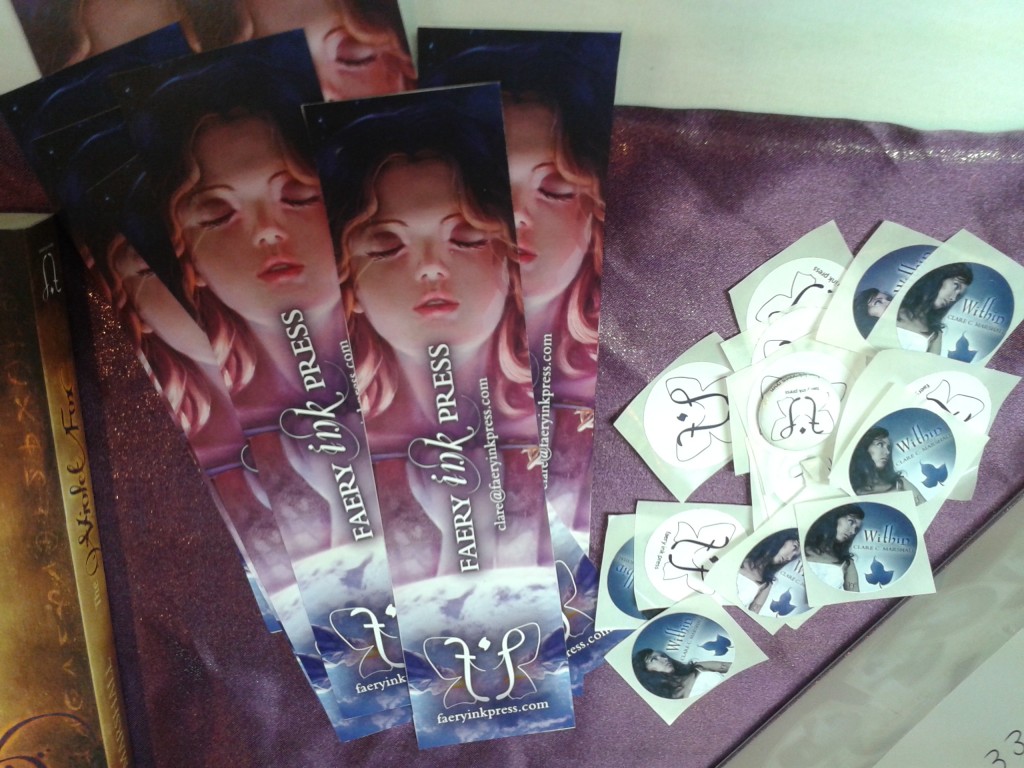 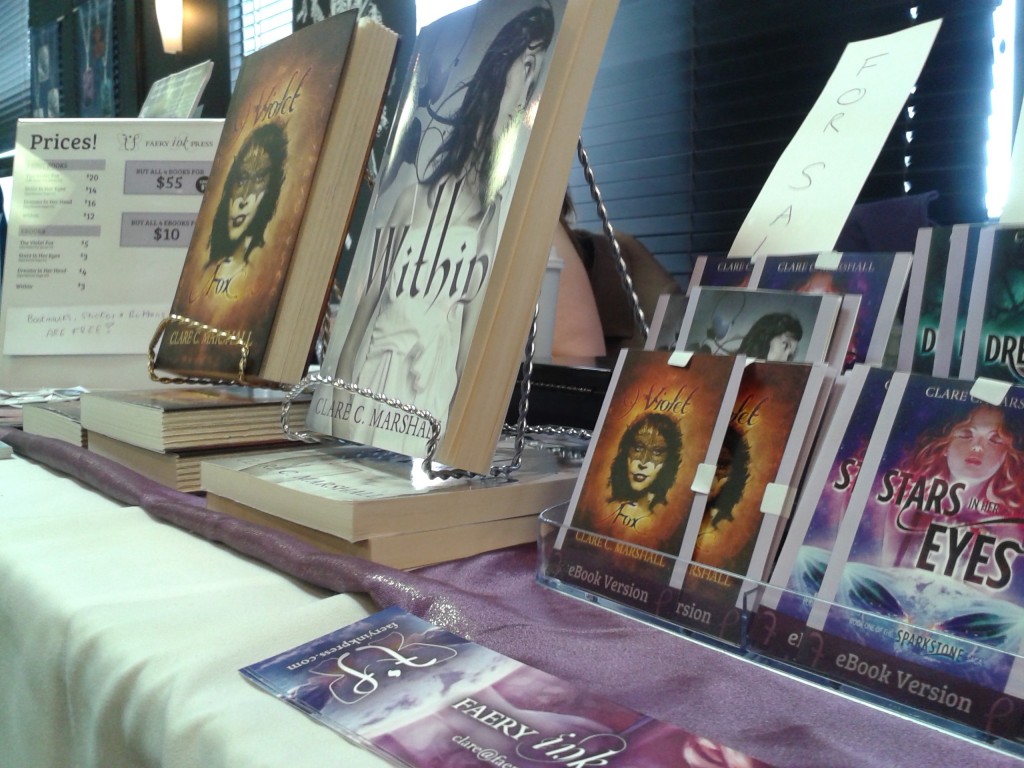 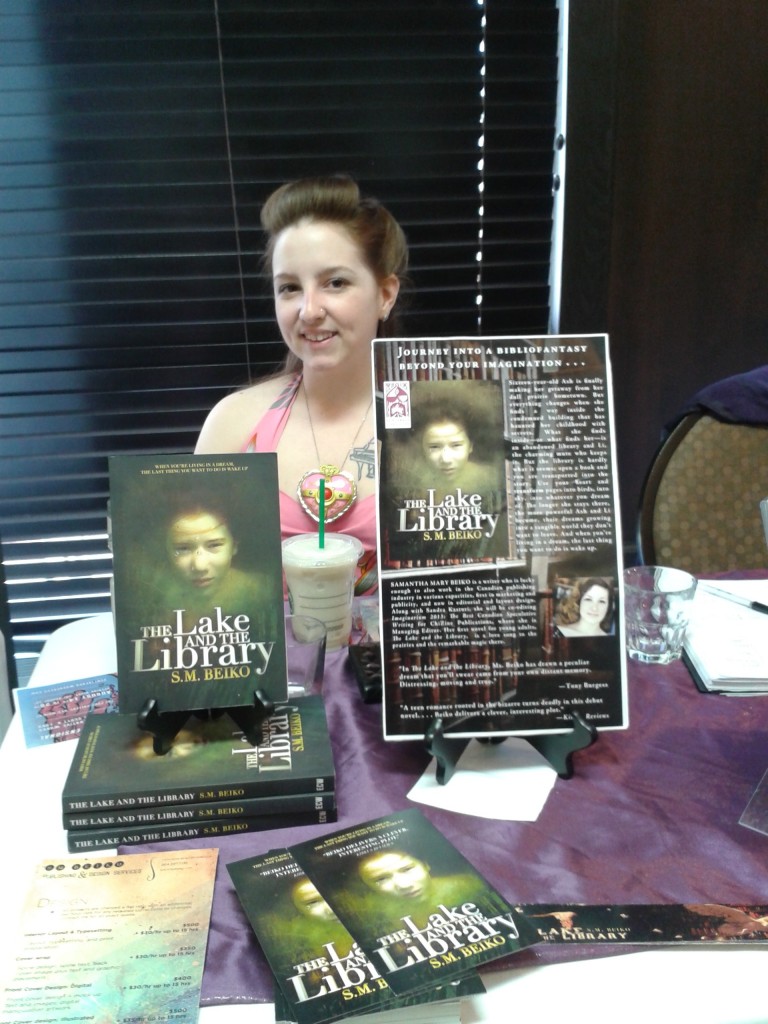 It’s a Sam, with her little Sailor Moon Transformer Locket! She is secretly a Sailor Scout. 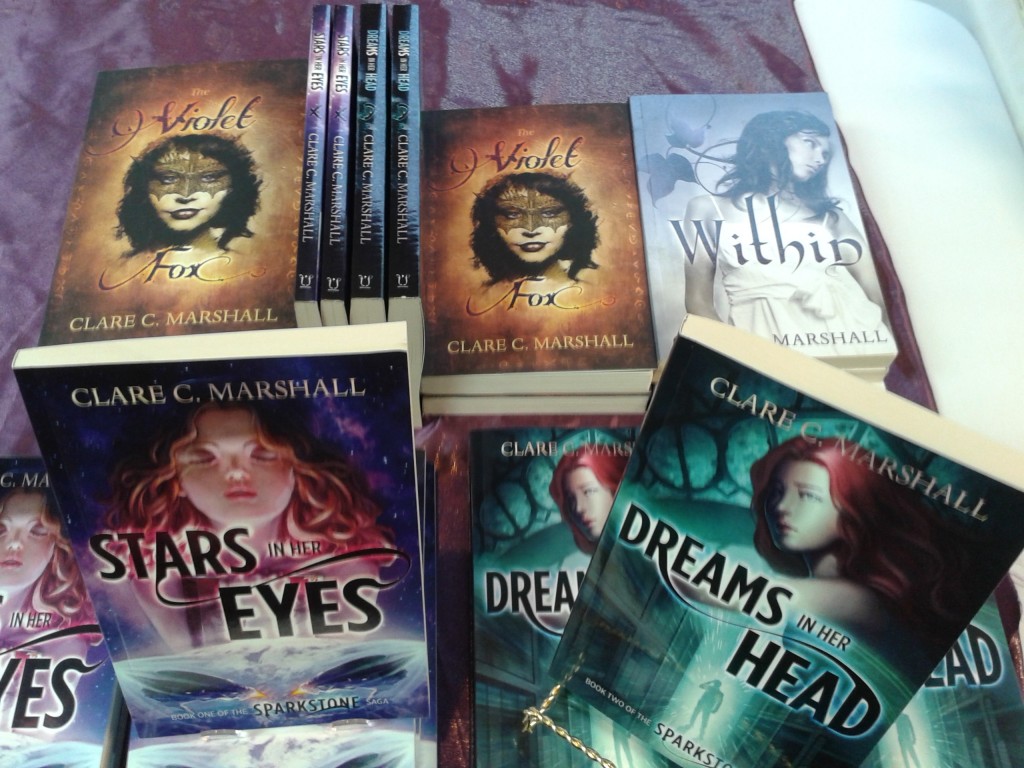 Things I Improved On From Last Year’s Keycon:

–Clear Signage! Since C4 and Hal-Con, I have a printed sign with all the prices listed on them. Big improvement on my pink cardboard!
–No one tried to steal my Lil eBooks. YAY. But I also didn’t make as many eBook sales. Last year I sold them 3 for $5, this year I did 4 for $10. Maybe it was a combination of fewer attendees and the higher price.
–Table Dressings. I have my pretty purple fabric, wooo!
–Pretty New Bookmarks. I have all the pretties. Unfortunately I’m almost out of stickers and buttons, as the girl who made them has run out.

Things I Still Need to Work On

My Sign SUCKS
I had my large 7-8ft tall pretty sign since When Words Collide last year but the stand REALLY SUCKS. I didn’t even bother taking the stand implements and just took the printed sign to hang on the wall. That lasted all of an hour before it came down–we didn’t have the correct tape. So I’m thinking I’ll just go to Staples and see if they’ll be able to attach my sign to a roll-up stand. I got my sign done at Digital Post originally but I got the cheapest option, so maybe that’s what it sucks? I just can’t get it to not fall over, and when you’re dealing with high-trafficked rooms, it’s important to have a functional sign.

Diversifying Merchandise
While I give away my stickers and buttons for free, I could certainly sell them for $1 or $2. At large cons this is especially true, where I noticed there are swarms of people who collect buttons and will spend lots of time picking out their favourites at various vendors’ tables. So I was thinking of creating 5-10 designs and printing a variety to sell. I think this will go over really well at Hal-Con because the women next to me last year had a large basket, and sold something like $2 per button, and probably made a fortunate on that alone. Scott A. Ford was doing this, and it seemed to be working well for him.

T-shirts, I’m not sure about. I’d like to have fitted t-shirts with scoop or V-necks, higher quality, maybe with some pretty sparklies? Oh god, I’ve seen t-shirts with just a person’s book cover on them, straight-up, and it does not look good. So I’d do a pretty-fied version of the Faery Ink Press logo, maybe a quote from the Violet Fox or Sparkstone series. I’d also have to figure out the logistics of printing all these shirts and in the correct sizes!

Changing the Way We Perceive Dealer Space
So I have a table, I put books and such on it, and I sit behind it…but what if I had collapsible bookshelves that I could roll into the space, ditch the table (or bring my own smaller one) and make it like a mini bookstore? And I’d like to have hard signs that could fold up, to put on top of the shelves, illustrating my various series. This doesn’t work as well in a smaller space like Keycon (unless I bought two tables worth of space) but this is something I’d like to work towards 2-3 years down the road.

I’ve made quite a few friends in Winnipeg over the past year or two. Returning to Winnipeg for the con is super fun because I know I’ll get to hang out with them. Being surrounded by people who share similar goals or have achieved similar things as you is so refreshing and motivating. There’s no competition, no judgement, it’s just a bunch of people getting together and sharing creative experiences and ideas.

Also, this is as good a place as any to mention, Chadwick’s book, Tombstone Blues, is also up for an Aurora this year, and his first book Thunder Road won the Michael Van Rooy Award for Genre Fiction this year. So he’s KIND OF A BIG STAR NOW! In Manitoba. 😉

Probably some of the most awesome moments happened outside of the Dealer’s Room and the con itself. A bunch of us (Samantha Beiko, Chadwick Ginther, GMB Chomichuk, Perry Grosshans, Silvia Moreno-Garcia, and another guy, sorry, I can’t remember your name!) went out for Indian food, and then we went to see GODZILLA in the theatre. Super fun! See these author “rollercoaster” pics as proof of our fun. 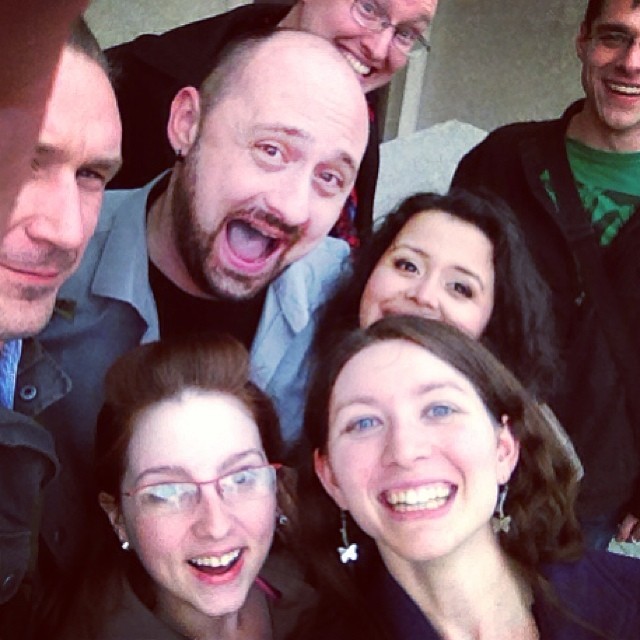 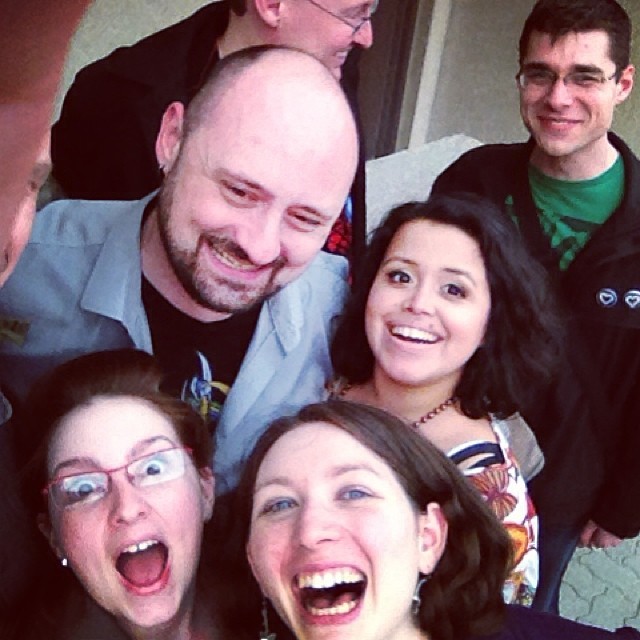 I’ve had a few conversations with GMB Chomichuk before but we got to talking at the restaurant. He is probably the most positive, make-your-art-happen, leadership guy I’ve ever met. He was SUPER SWEET to a bunch of children who showed up for a late-night zombie panel. It was mostly just our crowd and the kids, and he drew each kid a zombie picture. Shark zombie, Picachu zombie, he made it happen!

Anyway, at the restaurant, he had an interesting idea about making an illustrated short story–limited print run (100-250 copies), sell at $25 price point at comic cons, which not only would make for a tidy profit but also would give people a taste of my work. He did this and apparently it sold really well at C4 Con, despite it being up on his website for free. I like this idea a lot. I could do a Violet Fox short story, convince my sister to illustrate, and lay it out myself (and maybe with some help from Dave!). It would be something different from what I’ve done in the past but it could be a really great way to engage more people at large cons. I’ve already got some vague ideas about a prequel story for the Violet Fox, which would show us more of the Freetors’ lives and explore the conflict between the Fighters and the Extremists.

Other notables: Sherry Peters, had a great chat with her. She’s publishing a novel near and dear to her heart–Mabel the Lovelorn Dwarf–this coming August, launching at When Words Collide, and I can’t wait to read it. We discussed the best ways to lure people into signing up to a newsletter. She’s giving away some short stories! Also chatted briefly with Rob Sawyer a few times, and he said he thought the cover for the Violet Fox was beautiful! You know, I’ve never actually heard Rob speak (in person) at conventions, I hear he’s super great, I’m always just manning my table. I should probably sneak away some time.

Would I Go Back?

I’m not returning next year because I have scheduling conflicts, but the high cost of my plane ticket makes me re-think Keycon and whether it’s financially worth it. I was close to breaking even. The flight really kills me, and I’m not eligible for travel grants because I publish my own stuff. Maybe I’ll take the bus next time…but there goes about a day each way. Although I could work on the bus. Oh well. There’s definitely a community there and I had numerous people come up to me and say that they remembered me from last year, so that was super cool, but I’ll have to decide over the next year or so whether Keycon 2016 will happen for me.