Things I Learned At C4 Con 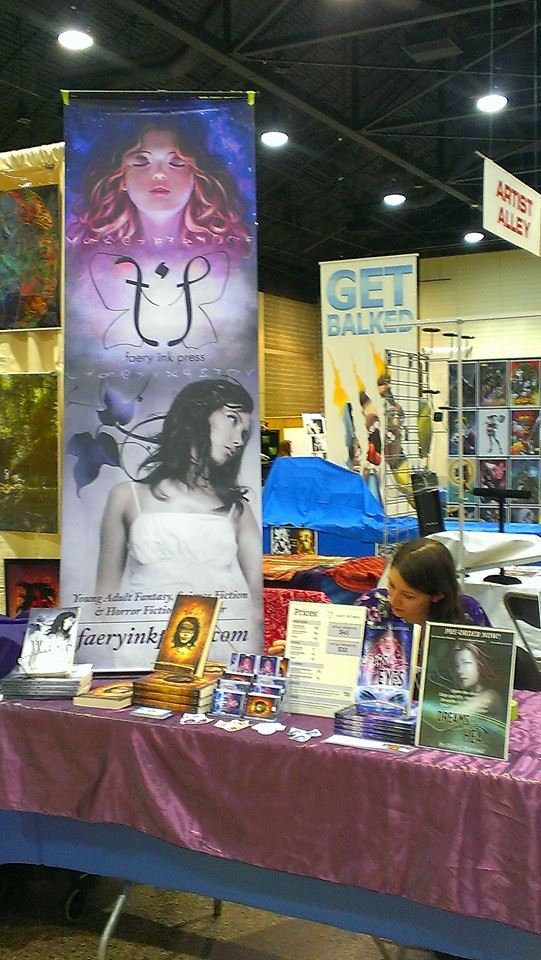 I just finished a long weekend at C4 Con in Winnipeg! I had a great time with S.M. Beiko (aka, Samantha, aka Sam), she’s super awesome. We shared a table and she was super nice to let me stay with her again for my second visit to Winnipeg.

Comic Cons are Not Book Cons

You’d think that because comics are half writing that this would mean people at comic cons would be interested in buying books. This is not the case. Sure, I had sales, but I had some pretty high expectations for this con and I was just blown away at how much I was not selling.

People go to comic cons to buy merchandise from their favourite shows, meet celebs and get their pics/autographs, dress up, take pictures of people who dress up, and buy a ton of comics/cool art. So while my stuff falls into the science fiction/fantasy/horror genre that all this stuff is in, it doesn’t automatically mean that I’m going to make thousands of dollars at a con that boasts a 30,000 people attendance.

A number of things such as the stuff below factors into this, such as…

The Winnipeg Convention Centre is huge. Just huge. Because a TON of people go to this thing. Line-ups out and around the registration area, just hundreds and hundreds of people waiting to get in. And two floors of merchants and other activities. And it’s all just a maze. I got lost a couple of times looking for my table because after walking down a couple of rows, you start to see the same stuff and it gets a little confusing.

Most of the authors/publishers were in a row near the “autograph alley” which was where all the celebrities hung out. This was both a blessing and a curse. A blessing, because we got to see Avery Brooks, Walter Koenig, Ron Perlman, and James Marsters pretty closely! A curse because it was sort at the “end” of the convention: people would wander by, and then seeing that there’s only the celebrities nearby, they turn around to look for more merchants to browse at.

Location isn’t something you can really change or help when you attend a con. You can just make the best with what you’re given. And I think we did pretty well. Being near other vendors that are similar to you has its pros and cons.

Pros: Your row becomes its own mini “author corner” and people will linger longer looking at all the books, and then can quickly make a purchase decision and not have to wander around the con to purchase which book they want. Also, people can quickly evaluate what books appeal to them in a short amount of time, and direct their attention toward which book table suits their interests.

Con: Increased competition. This didn’t really apply for our little row, since Sam and I were the only YA book vendors in our row (I think) but for the others, it was mostly fantasy vs more fantasy vs more urban fantasy. This is where superior book design comes into play for your product!

I should also note: not every book vendor in our little row was independently published. Chadwick Ginther had his own table, and he’s published by Winnipeg publisher Ravenstone. He’s a great example of a guy who does a lot of his own marketing–usually on his own dime. Not every publisher will send you to a con, all paid for, especially small publishers.

Obviously it’s not easy to put a con of this size together. But as a vendor and especially as someone who pays to go and attend this thing, it’s important to have your act together. The information we were sent–especially the times of operation–did not match the actual times of operation. There were frequent announcements that seemed to contradict one another, a ton of corrections that we weren’t sure were final iterations. It made the whole affair feel a little unprofessional, and more like a chore to attend instead of a joy.

Ebooks Are Not Swag

I had a surprising number of people try to take them because they thought that they were free. I guess that’s because I had them in a business card-type holder (because they look cool and actually professional in it) and they were in the front. So I had to make sure when people picked them up, to say right away, “Those are eBooks, and they are available today for purchase.” One girl didn’t get that and almost walked away with The Violet Fox, though I repeated it 2-3 times in our conversation. She said, “I have to pay for this now?” I guess she might have thought that you could take them and pay for them online? No.

What’s maybe worse is I had some people who didn’t even know what eBooks were, young people too! And I was sure that Comic Con would be the place to sell lil eBooks, because they’re a) cheap and b) convenient and c) technological. Nope. Sold nowhere near what I did at KeyCon.

On the last day, I ended up putting bookmarks over the card holders with “EBOOKS” written on them, so that it was obvious that you couldn’t just take them.
For next time, I think I’ll have clearer signage, but not just that–have a display case of eBooks, that clearly says, these are lil eBooks, and you buy them, and then have them in a flat collectible card case or jewelry case.

The Best Thing That Happened to Us All Weekend…

…was when Walter Koenig, Chekov from the original Star Trek series, came to our table. He said hello to me and was looking at my books, and asked, “How old are you?”

He looked impressed, and said that he was “in awe” of me.

He chatted to Sam and I for like 15-20 minutes, asking us all kinds of questions about publishing. He told us of his publishing woes with some of his fiction, I guess some of his books were mismanaged. At the end of his story he said, “Oh well, I didn’t come over here to talk about myself.” And we were like, “Oh no, that’s okay.” And we talked more about the publishing business, how it’s tough, how you can’t just put out a book and not market it, or rely on a famous name to make a book sell.

At the end of our combined spiel, he looked blown away. “Will you guys be my managers?”

We laughed. Of course it was a joke. But he did ask for our business cards.

He was a really sweet man. He visited every book vendor in our row and talked to them, asked how things were going. Not sure if the other celebs did that or not. But he seemed genuinely interested in all the writers selling their wares.

It was so funny when he left the convention on Sunday. He came down our row, smiling, popping his coat collar, and disappeared into the crowd, as if he were saying, “Hehe, no one will recognize me now!”

Will I do it again?

I’m not sure. I sound a little bitter in this post because there were more things that annoyed me about this con than other cons. C4 Con needs to get its act together if it wants to attract book publishers and authors and be a real force in promoting those kinds of artists. That’s not to say I didn’t do well at the con. I covered my expenses, including the cost of my trip from Calgary to Winnipeg and the cost of the table and the money I spent buying food, and made a little extra. I did get lots of exposure and social media followers because of it. But in terms of whether C4 Con was a good fit for me as a book publisher, I think I may devote my resources to a different con next year.