Things I Learned From My Second Convention

A follow-up to my first “things I learned” article about KeyCon 30 in Winnipeg.

When Words Collide in Calgary was my second convention I attended as Faery Ink Press, and I feel like I improved on my table presentation from last time, as well as learned some new things! So I thought I’d share them all with you.

Don’t Be Afraid To Ask For Help.

What would I have done without Avery Olive? This awesome Alberta author manned my table for at least two hours if not more (in one hour stints) while I gallivanted off to sit on a panel or host an editing session. She is awesome! Her book, A Stiff Kiss, published by Crescent Moon Press, is available on Amazon and all sorts of other places.

And of course, the wonderful Samantha Beiko was there and was awesome company as well!! Her book is The Lake and the Library, published by ECW Press.

Panels and Presentations Make YOU An Expert!

I did so many things at this con, and they helped me get off my butt and out into the community that was When Words Collide. First, I was on a “Live Action Slush” panel, where a designated reader read the first page of a submitted manuscript. The manuscript was usually submitted by someone sitting in the room! We gave feedback on the first page, and whether as editors we’d read the next page. It’s so hard on those panels, because in that situation, even if I disliked the first page, I’d still skip ahead to see what the rest of the sample was like.

In addition, I gave a presentation about author websites, where I talked about some of the things I do with my website, and WordPress in general. I also did a Blue Pencil Cafe, where over the course of an hour, I edited the first page or two of a person’s manuscript and gave them advice about writing and publishing. I really enjoyed that, I feel like I helped those people.

Finally, I did a small reading–but it was at the end of the con and there weren’t many in attendance, and by that point, I was mostly angling to get back to my table and do a final push in sales.

Something I Improved Upon: Signage, Table Dressings…AND Banner! 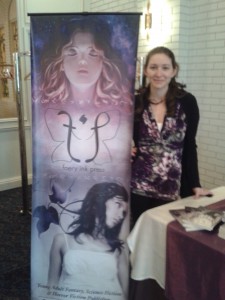 Since I’m doing four conventions this year–two of them will attendance into the thousands–I decided to splurge on a tall banner. I went to Digital Post and spent a tidy sum and gave them a file that Dave designed. And it was totally worth it. I was right by the door, and when people walked in, and saw my banner, you could see in their eyes the impression it was making. People stopped, and browsed, even if only for a second. It was extremely effective.

The one side effect of the banner (and in general, of me branding myself as a publisher) is that people approached me and asked if I took submissions. I do not. A LOT of people asked me if I will in the future. So for the record: maybe. It doesn’t make sense for me to take submissions when really this is my “hobby business” and commit to producing a product that I can’t effectively distribute. My books are paving the way for potential future books. 🙂

Unfortunately, the banner came undone at the bottom. Either a cleaning person knocked it over night or the mechanism wore too quickly…so I’m going to have to take it back to see if it can be fixed. Hopefully it can!!

When Words Collide is a book con. It’s for writers, and heavy readers, and publishing professionals. Most of these people seem to prefer physical books to print books so I sold WAY less eBooks here than I did at KeyCon. There was also more competition between the vendors since everyone was selling books, or something related to books. However, the lil eBooks did get lots of compliments and authors seemed to take it away as a good idea. I had two people almost mistake them for business cards so next time I will have clearer signage ON the little eBook stand that clearly denotes prices.

I expect to sell a ton at C4 Con and Hal-Con though, since there will be more of a variety of people who might be more eBook readers!

Two cons down, two more to go. They’re not until November so I have a few months to breathe and focus on writing, book signing, and my freelance work! Hopefully you’ll join me either in Winnipeg at C4 Con or in Halifax at Hal-Con in the first and second weekends of November respectively!