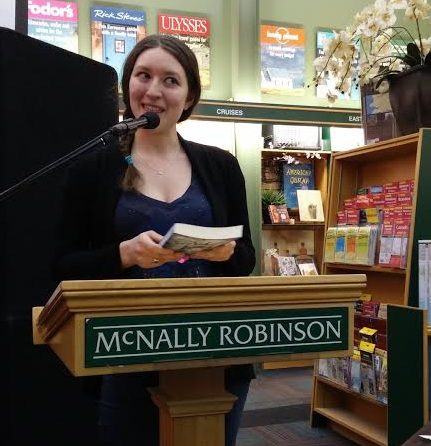 There’s nothing quite like being around your creative peers.

Not only do they have similar goals to yours–but they’re out there, creating art in the world. They’re not waiting for the gatekeeper to let them through. They’re saying yes to their art and finding ways to make it happen. That’s why I like Winnipeg. Because there are so many of those people that live there, including Samantha Beiko and Chadwick Ginther. I’d never pass up a chance to visit with them. Their support and friendship means EVERYTHING to me.

So here are the things that happened. I was there for a week, on a mission: one, to do a reading, and another, to give an eBook-creation workshop.

ChiSeries Winnipeg is a quarterly, non-profit reading series run by Sam and Chadwick, meant to promote Canadian spec-fic authors. McNally Robinson is the perfect location for the readings. I rambled through the store the day of to see where they had stocked my books–and found The Silver Spear had been given face-out treatment. Everyone goes for that kitty cover, I’m tellin’ ya. It was very humbling to see it in the YA section, next to some other fairly well-known authors. I don’t often get to see the results of my work in the world when I’m typing away at my computer, here in the basement in Calgary. 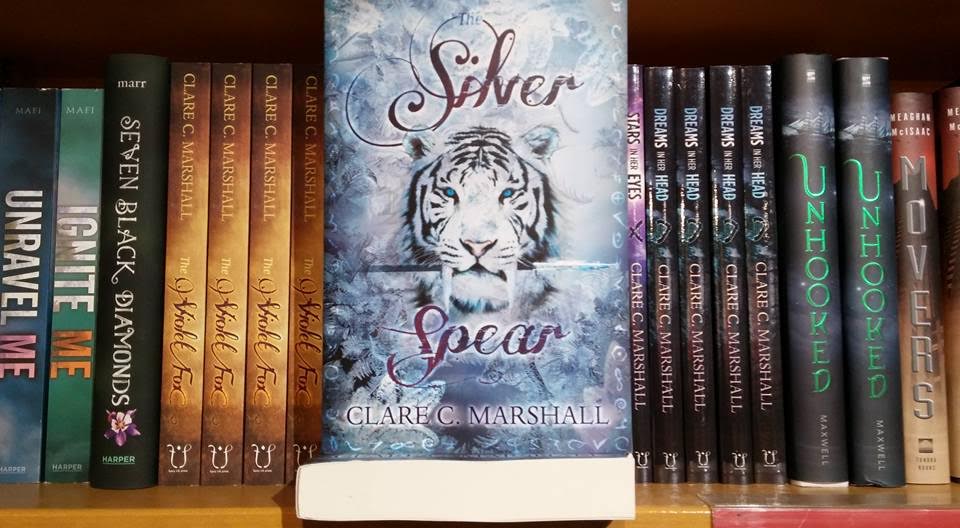 I think my reading from The Silver Spear was well received. I was among two other authors who read–Sierra Dean and Melinda Friesen, both locals. About twenty people showed up. The audience was attentive to the readings–each reading was about 10-15 minutes long. I’m always afraid that a reading longer than five minutes will cause people to get antsy but nope, people were there to take it all in (Tod McCoy, you were right?!?!) Sam said my reading was “SO ANIMATED” and people laughed at a few parts. I keep meaning to create and practice some sort of musical element to the reading – since there’s some music in The Silver Spear and the Sparkstone Saga – so it’s a little more of a performance than just me talking for 15 minutes. 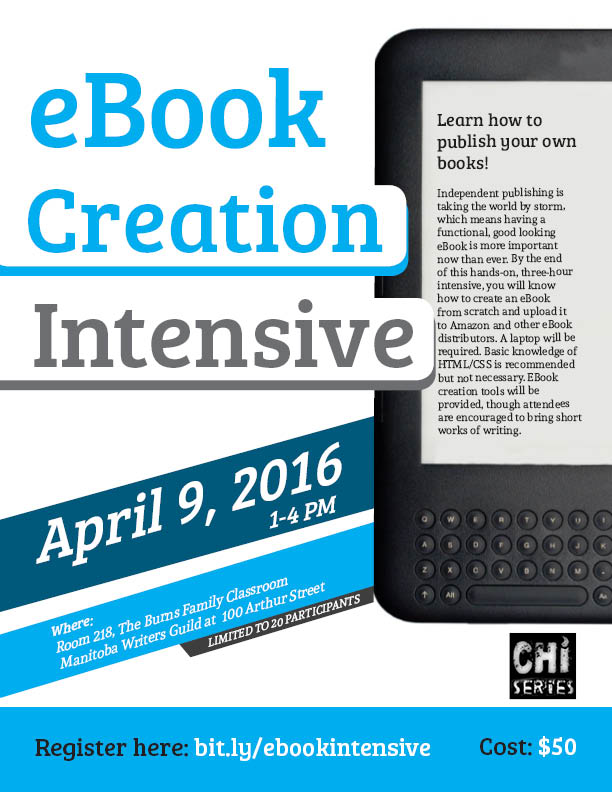 I was strangely not that nervous on Saturday morning as Chadwick and I left the house and made our way downtown to the Manitoba Writers Guild on the bus. Sometimes that’s not a good sign. A little bit of nervousness can help me perform better. I was more nervous about it earlier in the week, when I was struggling to finish up some other projects before I hopped on the plane.

I’m used to performing for about an hour. Presentations–musical and otherwise–usually run that length, and sometimes there’s someone to spell me off. But here, it’s all me. In some ways, talking is easier than fiddling–there’s less to concentrate on, and I have notes if I get stuck. When fiddling, I’m always two seconds ahead of the tune in my head, and when performing, I have no music in case I get stuck. If I get stuck, I improvise. 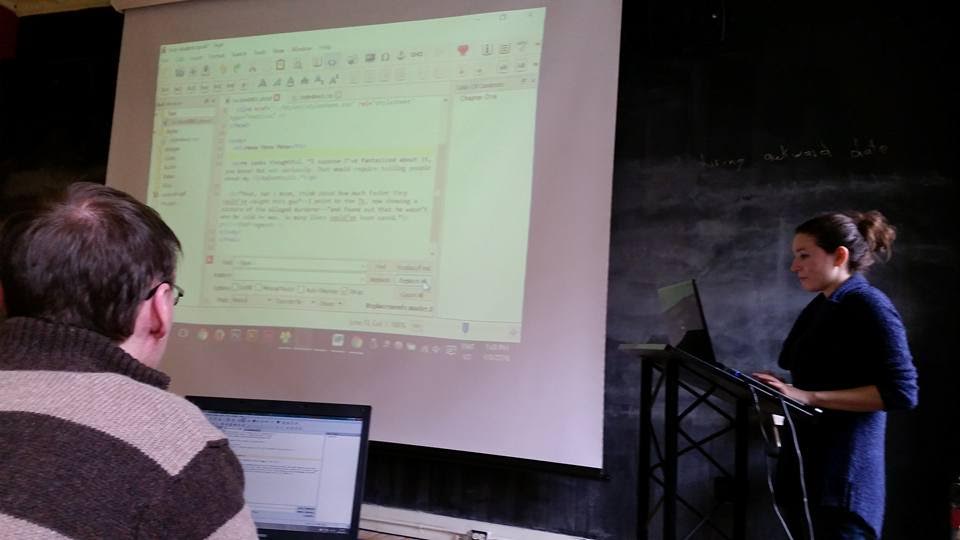 The bonus here was, I know this stuff. I’ve been doing it for six years. It was a matter of breaking the process down into steps, and firming up everything I wanted to talk about in three hours.

It also helped that the day before, I did the workshop for Sam and Chadwick. That helped A LOT. I think I was more nervous doing it for them than I was for a room full of people. It’s different performing for two people than twelve. I was reminded of my Alexander Keith days, when we’d have to do the tour for three or two or even ONE person! It’s also harder to perform in front of your peers. 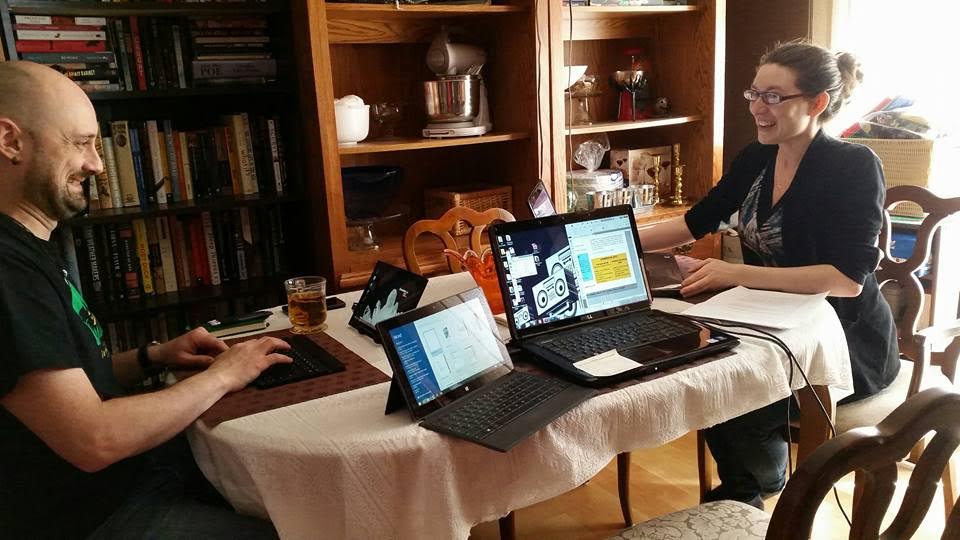 And boy, was I glad that I’d already showed Chad and Sam everything. Because they were a big help in the classroom! The attendance cap was twenty–ten people showed up. That was plenty. Because the workshop had some HTML stuff in it–and while HTML isn’t strictly necessary, it’s VERY useful for the way I create eBooks–I had to go around to every person after I explained a concept to ensure they got it. I guess I expected it to be a little easier than it actually was for people. There’s a big difference between knowing zero code and knowing how to decipher what’s going on. I was also really surprised at the number of people actually interested in publishing their own books–only three of the ten raised their hands. I guess the rest just wanted to know how an eBook gets made? There was an eighty-year-old woman who was keeping up brilliantly–she wanted to put a memoir she was writing into eBook format! Very cool.

I think next time I need to have more contingency plans. I cut out some material that I felt too advanced in the moment, which gave me more time to talk about Amazon and keywording practices, but I’m wondering if I could have devoted that time to something else. Also, I should have been more vigilant about upselling my services. I mentioned it at the end but I should have had cards at the ready.

Doing workshops like these is something I really enjoy, and it’s a good use of my skills and time, and it’s part of my business that I want to develop further. 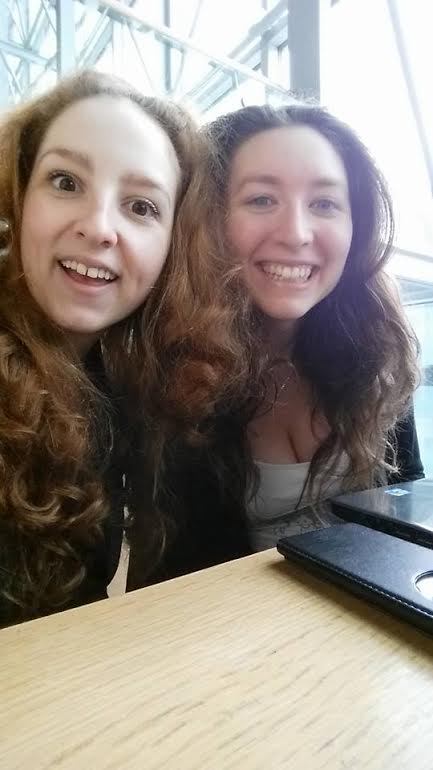 I’m glad I was able to get some visiting time in with Sam. We went to the public library in downtown Winnipeg and spent the afternoon there working and chatting about work. It’s a very beautiful library with large windows and lots of work areas.

At one point, Sam and I were discussing independent book distribution when an older man came to sit at our table. I’m not entirely sure why. There were plenty of empty tables around. He was reading a paper left there by someone else, but he kept giving us dirty looks as we continued our conversation. Eventually, after about five minutes, he stood up, and admonished us for being loud. Sam reminded him that this was a public library, and he was free to sit wherever he wanted. He remarked, “Aren’t you supposed to be working?”

“We are working,” the two of us said.

The old man seemed to disagree, and left. Just because we’re not typing away quietly doesn’t mean we’re not evolving a potential project or moving something forward. Sam and I are both independent publishing professionals, doing our own thing, living and breathing the industry, and the two of us sharing info about the latest developments and future plans is vital. Also, no one can tell me not to talk to my BFF!!! 🙂

To top this all off, a COMEDY FESTIVAL was happening in the main lobby–yes, actual performers doing a show! So…yeah!

It wasn’t all work though. Sam, Chadwick, Wendy, and I took in The Princess Bride playing at the Met, we went out for some tasty burgers, investigated a candy shop in a train, attended the C4 Winnipeg Pop Culture Expo (and said hello to Greg, and got to meet the very talented Scott Henderson), and perused a giant comic book store that made me really want to write graphic novels.

Very, very huge thanks to Chadwick and Wendy for hosting me – I didn’t burn down the house SO THAT’S GOOD! And major thanks to Sam and Chadwick for organizing the ChiSeries Winnipeg reading, and the workshop, and also helping me out with the workshop itself! They are currently up for an Aurora Award for ChiSeries Winnipeg and they deserve it – they work hard to bring quality geek-related and writing/publishing events to Winnipeg, and their love for the industry and their city shines in everything they do.