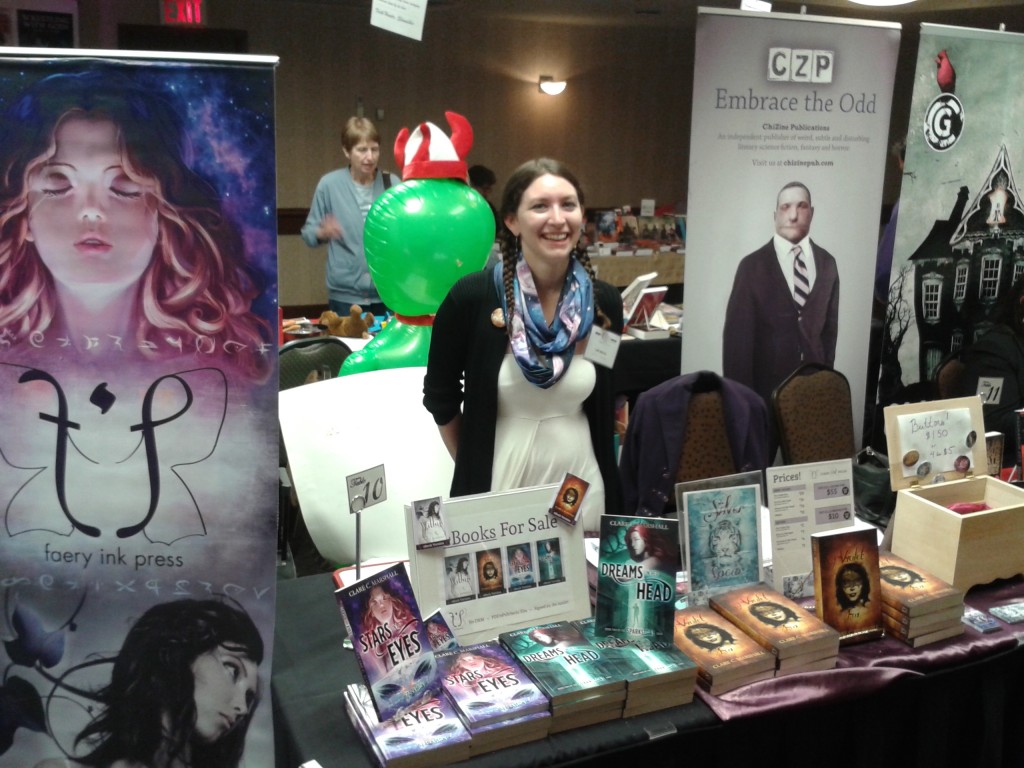 Another When Words Collide complete! This is my third When Words Collide, and was drastically different than last year’s, which for some reason I did not do a write-up about. Everything about this con was a level-up. Different hotel. Better dealer’s room. More opportunities. More people–and more people who recognized me and my books. I haven’t seen some of my writer friends for a while, and so it was exciting to be back in the swing of the Calgary writing and publishing scene.

I’m not sure whether it’s because I haven’t been in Calgary a while, and I’m suddenly back, but I had a lot of people asking me to hang out/go for business coffee. Some of this is 100% from my client work, and doesn’t necessarily have to do with Faery Ink Press. Some of it is from publishing friends, and we are getting better acquainted because there is something we can collaborate on/trade. Others are writers who want advice about independent publishing. Couple this with being on a ton of panels, and running the table, and I felt very in-demand this year! That’s not a bad thing.

In general, this year felt very different from previous years. WWC has been, for me, a chance to hang out with all my writing/publishing friends. Selling books is kind of a side effect of going. This year was more awesome since Brett and Sandra from ChiZine were there–I used to intern for them–and also Greg, who I don’t often get to hang out with in small groups. It was nice to catch up with them and talk about future projects. Having them next to me made me feel really good, because everyone’s books look awesome and talking silliness with them reminds me of why I got into this whole thing in the first place. Add in Hydra House and Fairwood Press and we were a very friendly, fun aisle to hang out in. 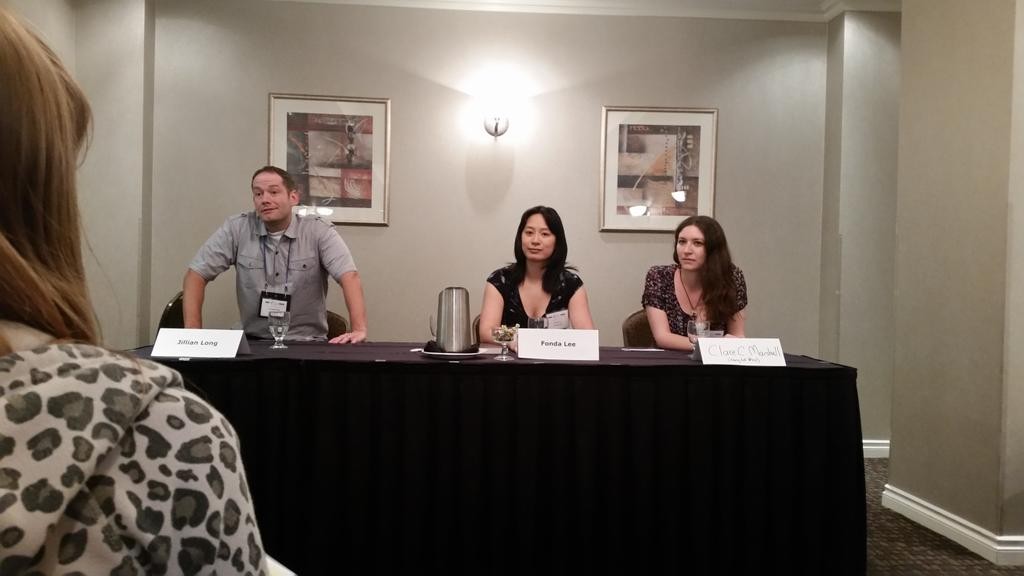 Like I said, I was on a lot of panels this year, including one with Brandon Mull. He looks pretty silly in this picture, while I look very frowny! That’s my thinking face. Also Brandon got to be Jillian Long for the panel.

After 6 different panels, I have to say I was a little brain-fried. Hopefully what I had to say was intelligent. Friday and Saturday I noticed people came up to me more, complimenting me on my diction. So that’s good! Sometimes I feel like there’s only so much I can say. Also, I don’t want to always refer to my own books as examples when I’m speaking–I tried to think of other examples when I was trying to give advice or explain concepts–that was most difficult come Sunday and all I could think was MUST GO TO BED SOON. 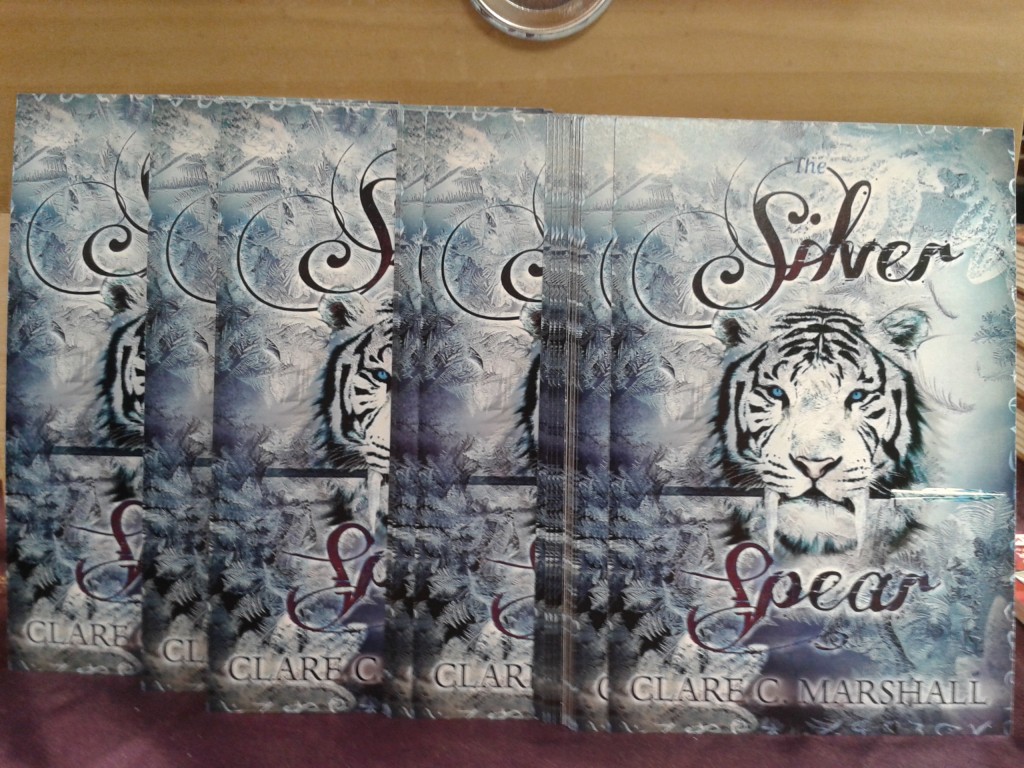 Unfortunately I didn’t have The Silver Spear in time for WWC. But I WILL have it for Edmonton Expo next month, knock on wood, if the shipping gods are in my favour. So I printed these postcard coupons and gave them out to people who purchased the Violet Fox. I spread them out in front of me to look at all the time because they are oh so pretties.

So because I didn’t have the copies, I took pre-orders. This was far more successful than the last time I tried this. Probably because I had a lot of people being like WHERE IS THE SILVER SPEAR MUST HAVE IT and I was like UGHHHHH SOOOOOON, in the best possible way there is to say that, because I TOO want to hold it in my hands! 🙂 Anyway, at the time of writing this, I’m just finalizing all the printing junk, so very, very soon, just a few more weeks until I can send out all the pre-orders!

I had some conversations with a few people at my table that may lead to concrete opportunities in the future–though with these things, you just have to follow up, investigate to see if it’s worthwhile, or sometimes, things never come to pass. Other than that, some of my favourite moments of the con were the low-key hang-outs with Sandra, Brett, Chadwick, Sandra, and Greg. I also enjoyed getting to know Hayden Trenholm and his wife Liz over wine on Saturday! Oh, and meeting Sally Harding at the absinthe/rum party. She was very delightful.

As I mentioned before, Greg is the most positive, take-action, leadership-guy I know. When you speak, he gives you undivided attention. I don’t know if he’s ever been afraid in his life? He’s a big ball of inspiration to be around because he’s always focussed on what’s next, and wants to know what you’re working on too.

In particular, I liked what he said to a customer while he was sketching for them (paraphrased): “The people who have success, they’re the ones who just haven’t given up yet.” That’s so true in this business. I don’t sell the most amount of books, and there are things I could be doing more of or better, but I just try to improve the next time around. There’s a lot of things about publishing that are one- or two-years-ahead focussed (the amount of time it can traditionally take to produce one book), yet I like to think about ten or twenty years down the road, when I’ll have a whole ton of content that I can push (and who knows, employees?!!?! Proper distribution?? MORE AUTHORS??? Perhaps, we’ll see–keep buying, every little bit helps!). That keeps me going: keeping my eyes on a distant goal.

I also had an intense discussion with publisher Tod McCoy about reading times. Apparently in Seattle it’s acceptable to read for 20 minutes at a public reading. Here, you better only read for 5 minutes…10 minutes if you are a good reader, or a known author–else, people might start to get agitated. Or worse, you literally talk people out of buying. I promised him that I’d read for a long time if I ever came to Seattle. On a side note, Tod also mixes a mean drink.

I feel like I did a lot of socializing with my Winnipeg/Ontario friends rather than my local connections this time around. So if you wanted to talk to me and didn’t get the chance, I’ll see you in two weeks at IFWA. No matter who I talked to, I felt really lucky to be surrounded by good friends that make me feel like what I do matters.

These little things and others add up. It’s hard to explain or pinpoint, but this weekend I really felt like success was in my hands.

WWC isn’t really a sales con, it’s a con for networking. Plus, I didn’t have a new book out in time, so I knew about how much I’d make. I actually ended up selling more Violet Foxes than I expected–probably because I was talking up the Silver Spear. Stars In Her Eyes and Violet Fox generally sell about the same, with Violet Fox outselling by a handful. This time I only sold a handful of Stars! Though I did have a few people asking about the third book in the Sparkstone Saga, and that was super cool.

More people bought buttons than I expected. They’re a nice little souvenir. They’re a pure moneymaker at this point.

This will be the last con I have four books–just when I’ve gotten used to displaying FOUR! Still haven’t gotten wooden shelves, but will soon. I’m definitely getting to a point where I need to strategically place everything because I’m running out of table space. I’ve started only bringing a couple of copies of Within and downplaying its display in favour of more room and prominence to The Violet Fox and the Sparkstone Saga.

I’m also happy to have my DOLLY!! It’s the perfect size for getting stuff everywhere, and everything fits perfectly on it!

As for my banner, we just propped it up in a corner out in the open, and it didn’t fall. That is a major win. The tape is holding!! 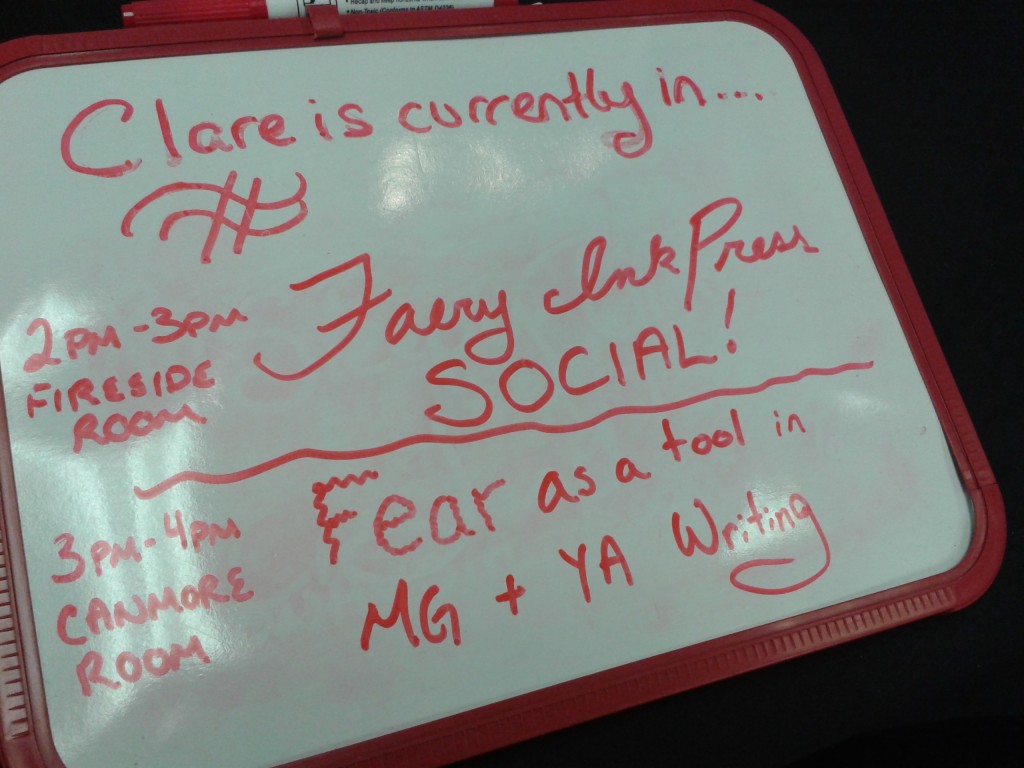 This year I did something different. A book social.

Leading up to the event, this gave me a lot of grief.

I was originally hoping to have some advance copies of The Silver Spear, but editing took longer than I anticipated–so no launch party. Instead, I decided instead of a sit-and-talk—I’d been doing so much of that—I wanted to do something fun. A short reading, a Q&A…and then games! Pin the flag on the castle, and a scavenger hunt. I was going to do trivia too, but I ran out of time. I bought some balloons and dollar store prizes. I knew I only had like five minutes to set up, and a giant room, so I did what I could with the resources I had.

The turn out was all right. But I consider it a success in that people came that I didn’t personally know. And I was extra grateful to the people who I did know who came! I think people enjoyed it? I could’ve made a lecture, I could’ve just ordered food from the hotel and ordered people to socialize…that just seems like a waste of an hour. If you want to talk to me, come to my table, or speak to me in the panels, or afterwards. I love when people come talk to me at the table!! I’d rather engage people with some interactivity at a social than make them listen to me talk, or leave them to linger awkwardly in a corner.

And you know? People bought books at the social–pre-orders, even. They wanted to know more about my stuff. They hadn’t even known about me a few days ago. So again, that’s a win.

The concept needs some work. It would be much better if I could bring my own food (it was order expensive hotel food or have nothing–and I have food allergies). I don’t think people were expecting me to make them play games, but no one objected–in fact, MORE people came in because they saw we were doing something different. Someday I’ll have a hotel room party…though those get crowded and you have to have free booze if you want people to show up, and it gets hot! I enjoyed ChiZine’s room parties when they did them: a short reading, and then booze until everyone goes to bed. Except my audience generally is under the drinking age…so virgin cocktails served by a fancy tuxedo person? Reading, then games, then more socializing. Perhaps next time.

Also, big thanks to Kate and to Jessica, for helping out at the social! 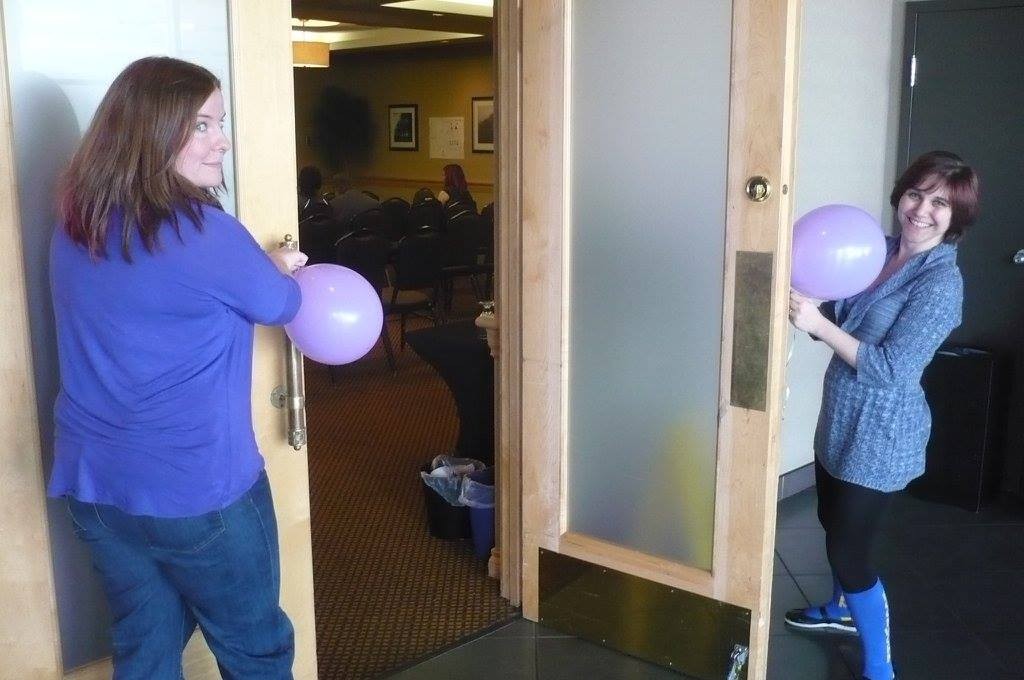 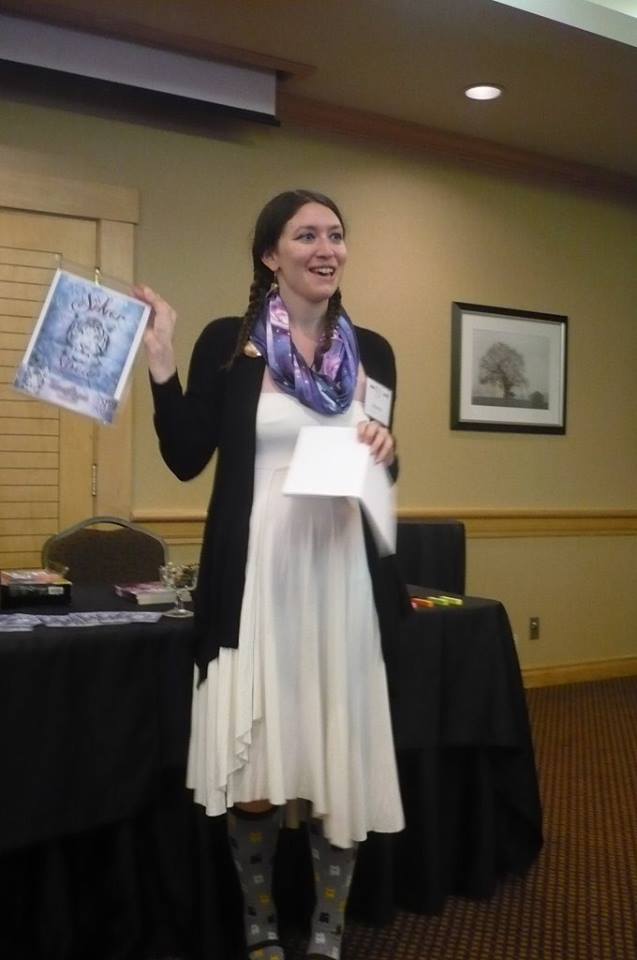 Going to WWC, you’re bound to make opportunities for yourself. It’s a must-attend for any Calgary writer. Or Western writer. Because of its controlled size (650 people), you get to meet and socialize with Canada’s spec-fic writing and publishing elite. You will always come out the other side of the weekend invigorated. For as long as I’m able, I’ll be there.

Recently, I’ve been making silly excuses to myself about why I haven’t done an American con. I really want to visit Seattle! So I should do a Seattle con! After doing this con especially, I feel like I’m a step closer to being ready to take Faery Ink Press abroad.

As always, major thanks to Kate Larking, who makes my life easier. And to Randy McCharles and the volunteers, for making everything possible.